What now stands as the Wiregrass Museum of Art was once the Dothan Municipal Light and Water Plant in the early 20th century. Constructed of red brick, this small two-story building was constructed by W. F. Thornton Consulting Engineering in 1913 to be a power plant and water provider for early and growing Dothan. Once constructed it was the only coal-generated power plant in the Wiregrass region. Originally the power plant complex was much, much bigger than this single building. The building that exists here is just the main powerhouse of the plant, the plant previously had: a powerhouse, garage and tool shed, prison yard, cooling pond, coal yard, two pump houses, a machine storage building, a small tool shed, a covered reservoir, substation, auxiliary reservoir, underground gasoline tank, two scales, a well, and two small office buildings. Due to the outdated design of the plant by 1928, it had become prohibitively expensive to maintain, leading to the city purchasing power from the Alabama Power company and shutting down the plant. The city would once again attempt to provide their own power in 1933 but would eventually shut down the plant for good in 1949. In 1986 the building that housed the power plant was selected to be the location for the new Wiregrass Museum of Art and on October 3rd, 1991 the building was added to the National Register of Historic Places. 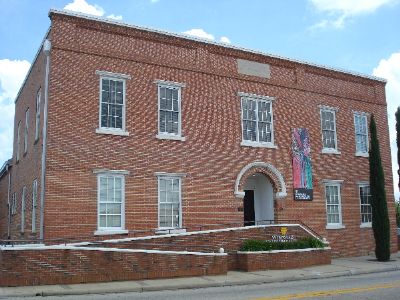 Originally built between 1912 and 1913 by W.F. Thornton Consulting Engineering, this building was constructed to provide power for the rapidly growing population and industry in Dothan Alabama. Between 1910 and 1920 the population of Dothan grew by 48% to 10,030 people, and industry was rapidly moving into the city. In response, the Dothan Municipal Light and Water Plant was constructed to provide for city needs. The plant was built at a cost of $100,000 and was the first only coal-generated power plant in the Wiregrass Region. The power plant had three coal-fired generators totaling 4,500 kilowatts and a million-gallon groundwater storage tank tied to a large water pump that had a capacity of 2,000,000 gallons of water per day. Originally the power plant consisted of: a powerhouse, garage and tool shed, prison yard, cooling pond, coal yard, two pump houses, a machine storage building, a small tool shed, a covered reservoir, substation, auxiliary reservoir, underground gasoline tank, two scales, a well, and two small office buildings. Today only the powerhouse remains of the Dothan Municipal Light and Water Plant.

Unfortunately, by 1928 the power plant design was already outdated and had become increasingly expensive to operate and maintain. Dothan residents soon paid higher electricity rates than anywhere else in the state and the city still needed yet more funds to build schools and pay off city debts. This was in spite of the massive revenue that the Dothan power plant was bringing in. Combined totals from electricity and water services at the time were $58,284 in 1918, $73,672 in 1920, and $155,832 1925. Due to rising costs to maintain the plant and after heated debates about what should be the city’s next step the city began purchasing power from the Alabama Power Company.

Five years later when the contract with Alabama Power was up the city improved the Dothan plant and attempted to resume utilizing local power. In 1942 Dothan once again started buying power from Alabama Power and by 1949 all of the city’s power was being provided by AP, leading to the shutdown and removal of the city generators.

In 1986 a national magazine made a list of some of the worst places to live in the US, Dothan was included in this list, citing the city’s lack of a museum. In response, Mayor Larry Register created a 13 person committee to address the feasibility of establishing a museum for Dothan. The committee was given $50,000 to begin the process of planning the museum and in 1988 the design for the new museum was unveiled. Designed by local firm Joseph L. Donofro and Associates the new museum design was expected to cost a projected 2.8 million dollars. The City Commission was obviously concerned over such a bulk cost for the project and the Museum Board submitted a revised plan to divide the project into 4 phases which the City Commission accepted. To date, only 3 of the 4 phases have been completed.

The building was placed on the National Register of Historic Places on October 3rd, 1991, and a historical marker was added to the building commemorating the event. Today the Wiregrass Museum of Art hosts more than 500 pieces alongside works of local, state, and national artists.