Designed by local master carpenter, Richard Munday, Trinity Church was completed in 1726 and is still an active parish within the Episcopal Diocese of Rhode Island. The congregation can trace its origins back to 1698 and the current Trinity Church replaced the original version built c.1702. The church features its original chalice-shaped, central pulpit; alter table and bell sent to the parish by Queen Anne in 1702. Trinity was expanded in 1762 and its iconic steeple was rebuilt in 1768. It went through a major renovation in the 1980s and was repainted its original color soon after. Trinity Church has been designated a National Historic Landmark since 1968.

Trinity Church's steeple has been a fixture on Newport's skyline since 1741. 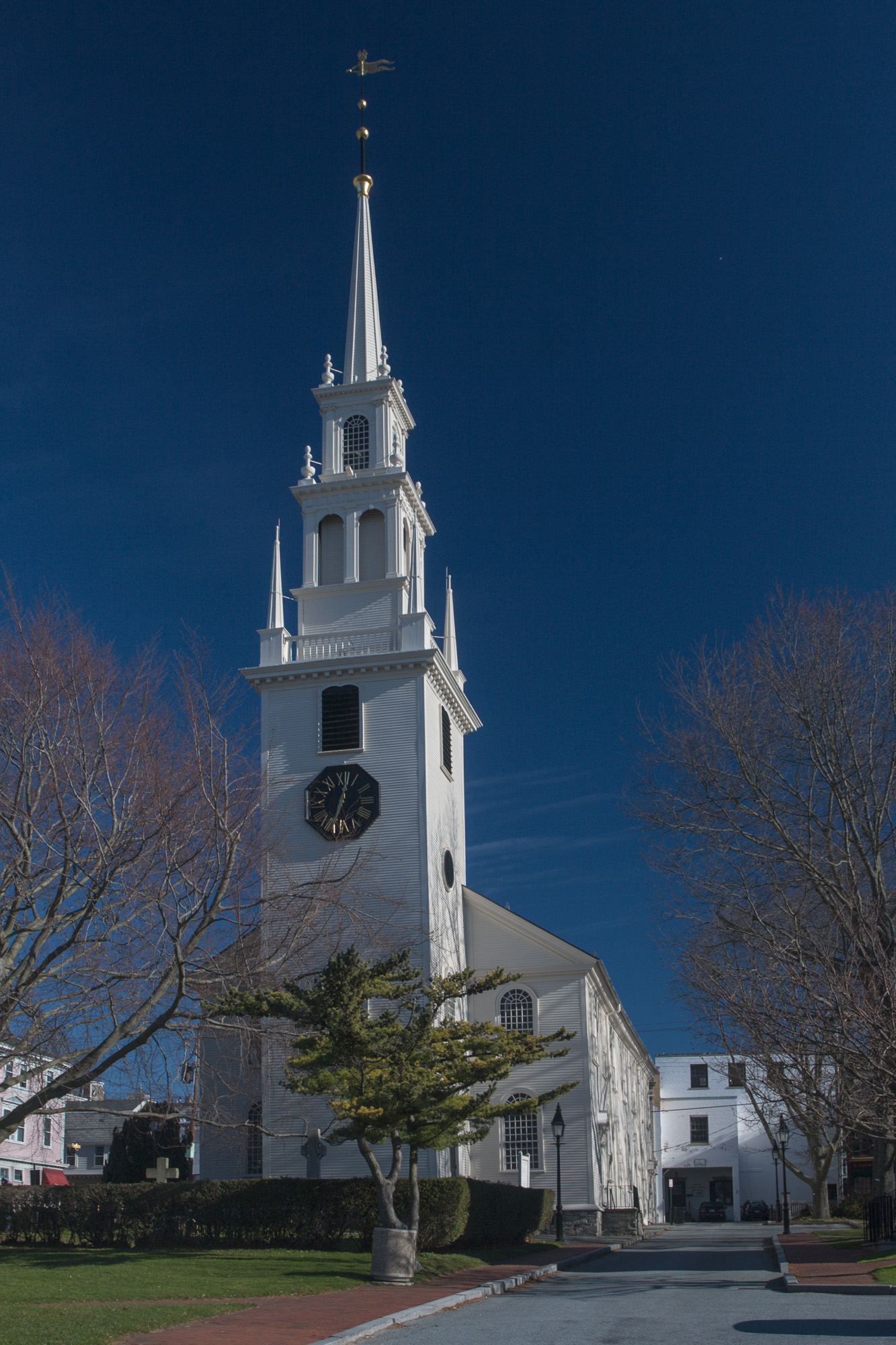 The box pews within Trinity Church have hosted the likes of George Washington and Queen Elizabeth II. 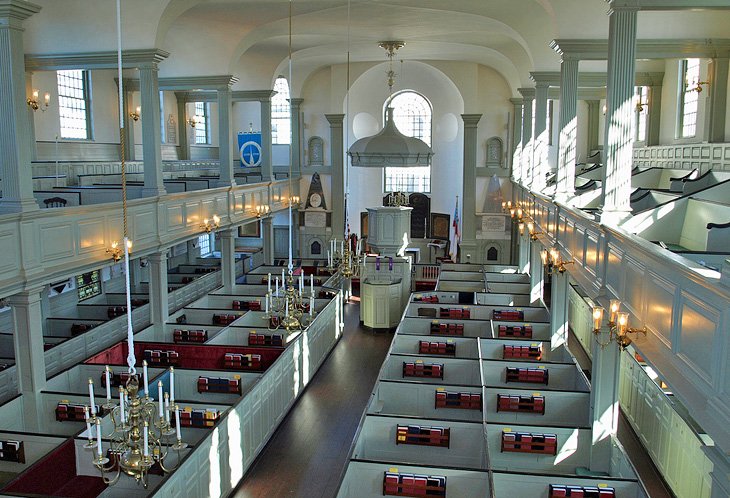 A side view of Trinity's unique, chalice-shaped pulpit. 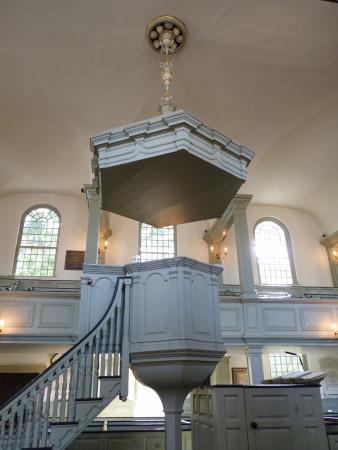 Trinity's choir loft holds the remnants of its original organ which was donated c.1733. 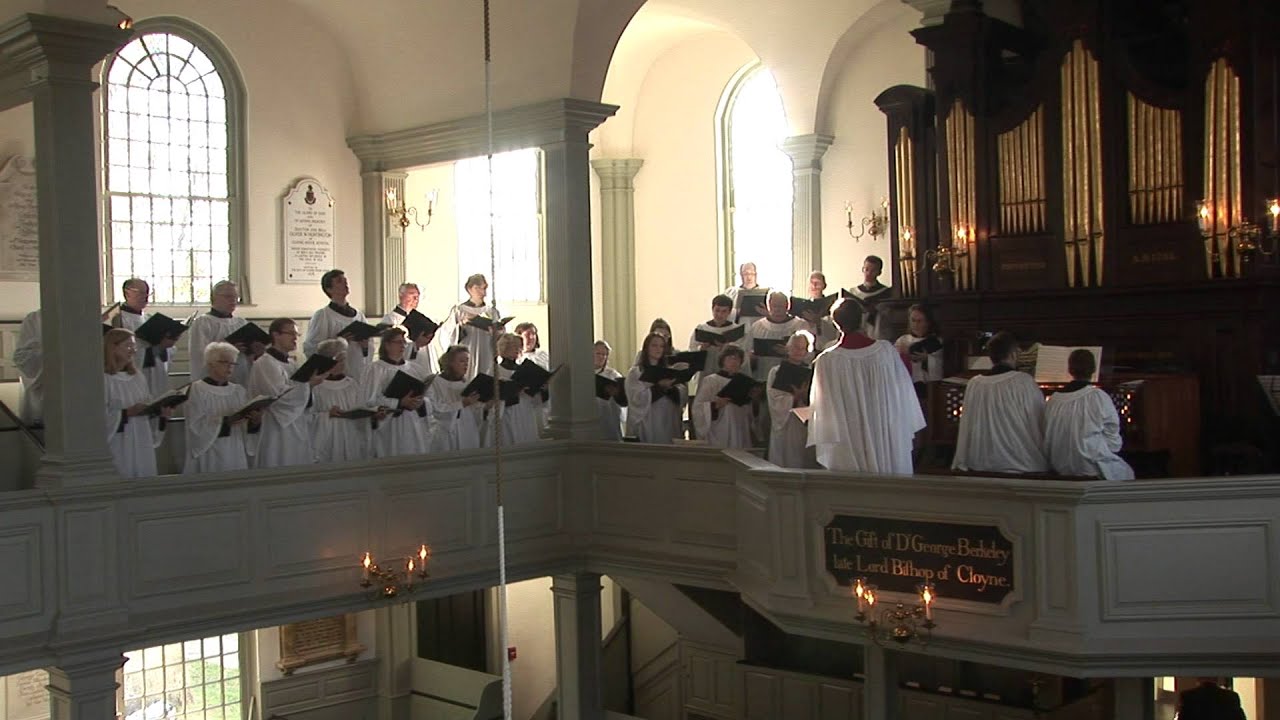 Just a few of the pieces of funerary art contained in Trinity's burying ground with numerous headstones from the 18th century. 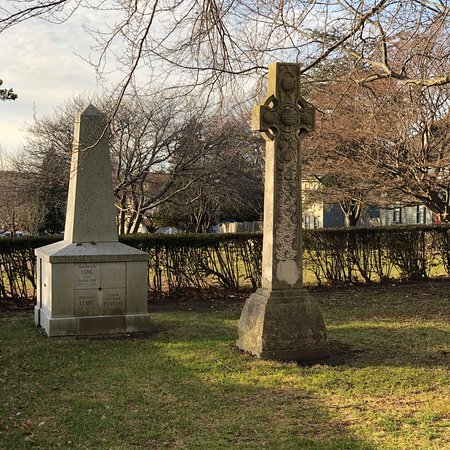 In 1698, Newport established an Anglican (Church of England) congregation that would become Episcopalian after America broke from Great Britain in 1783. The new parish built its first house of worship along Spring Street around 1702. However, by the early-1720s the congregation had outgrown the small church and plans to replace it began. The parish secured the services of local architect, Richard Munday, who also designed Newport’s Old Colony House and the Sabbatarian Meeting House which now houses the Newport Historical Society.

Munday based his design on those of Britain’s famous architect, Christopher Wren and his finished design closely resembles Boston’s Christ (or Old North) Church which was completed in 1723. The noticeable difference is, of course, that Trinity Church is constructed of wood rather than brick. Completed in 1726, Trinity Church is rectangular in shape and protected from the harsh Rhode Island weather by clapboard siding and a low-pitched roof. Munday included the church’s prominent steeple in his original design, but it was not added until 1741.

Inside, Munday designed a three-tiered, wine glass-shaped pulpit which he placed in the center of the church’s main aisle. It is the last center-aisle, freestanding, three-tiered pulpit left in the United States as all have been demolished along with the churches they resided in or moved to the side or end of their home churches. As was the custom, parishioners purchased the box pews their families would occupy in order to raise funds for the church’s construction. The roof and mezzanine, which offers additional seating, are supported by a series of square columns.

Trinity’s original organ was donated by Irishman Dr. George Berkeley sometime around 1733. However, all that remains of the organ are the center façade and faux front pipes. The crown at the top of the façade represents Queen Anne and the bishop’s miters represent the Archbishop of Canterbury and Bishop of London. Of the original four chandeliers, only the one nearest the spire is original. It was designed and built by Thomas Drew and arrived from Exeter, England in 1728. Several box pews feature engraved silver plaques that commemorate significant guests who have worshiped at Trinity to include George Washington in 1781 and, more recently, Queen Elizabeth II and Archbishop Desmond Tutu and his wife Leah. Archbishop Tutu addressed the congregation shortly after being awarded the Noble Peace Prize in 1984.

Due to its growing congregation, Trinity was expanded in 1762 in a unique manner. The church was divided in the middle and its rear half was moved back 30 feet. Three additional bays was then added in the middle to re-connect its two halves. A few years later, the original steeple was removed and rebuilt in 1768 and there is evidence that the church and grounds were used to muster British soldiers during the American Revolution.

Trinity’s prominence to Newport was increased in the 1970s when Queen Anne Square was created when buildings around the church were acquired by the Newport Restoration Foundation, led by tobacco heiress, Doris Duke. These buildings held no historical or architectural significance and were demolished to make room for the public space with Trinity Church as its centerpiece.

Over the centuries, the harsh winds coming off the North Atlantic took their toll on the church. While undergoing a structural survey in the 1980s, it was discovered that the church was listing to the north, the result of the near-constant winds. From 1985-1987, the church was stabilized despite not being returned to its original position. During these renovations, both the interior and exterior were painted to represent the church’s original colors. During the week, visitors are welcomed by members of the Guides Committee, or “sitting saints,” and all are welcome for Sunday services.