This marker commemorates Cowell’s Wharf and notes the presence of at least forty buried sailing ships from the 1849 Gold Rush era located below the streets of San Francisco. Some of these ships were found accidentally by construction crews while they were at work building the foundations for new office buildings in the area, and then were further unearthed by archaeologists. The ships were discovered on the Embarcadero and in part of the Financial District, which used to be underwater. During the Gold Rush, the ships once carried passengers to San Francisco from various places in the U.S. and the world, but they were abandoned shortly after arrival amidst the pandemonium caused by the prospect of gold. A massive fire in 1851 consumed the remaining ships down to the waterline where they sat docked in Yerba Buena cove. This portion of the cove was eventually filled in, paved over, and built upon, leaving the remains of the ships buried underneath. This historical marker is located on the sidewalk where Cowell's Wharf was located in the 1850s. The marker is embedded within the sidewalk across the street from the pier.

Buried Ships Historical Marker, placed in the sidewalk near The Embarcadero and Union Street 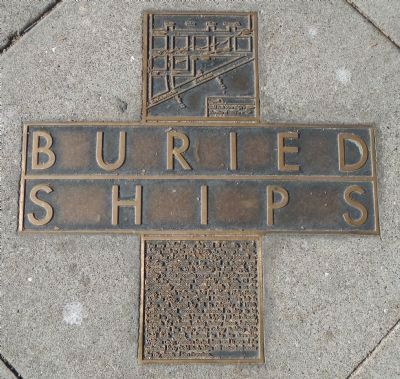 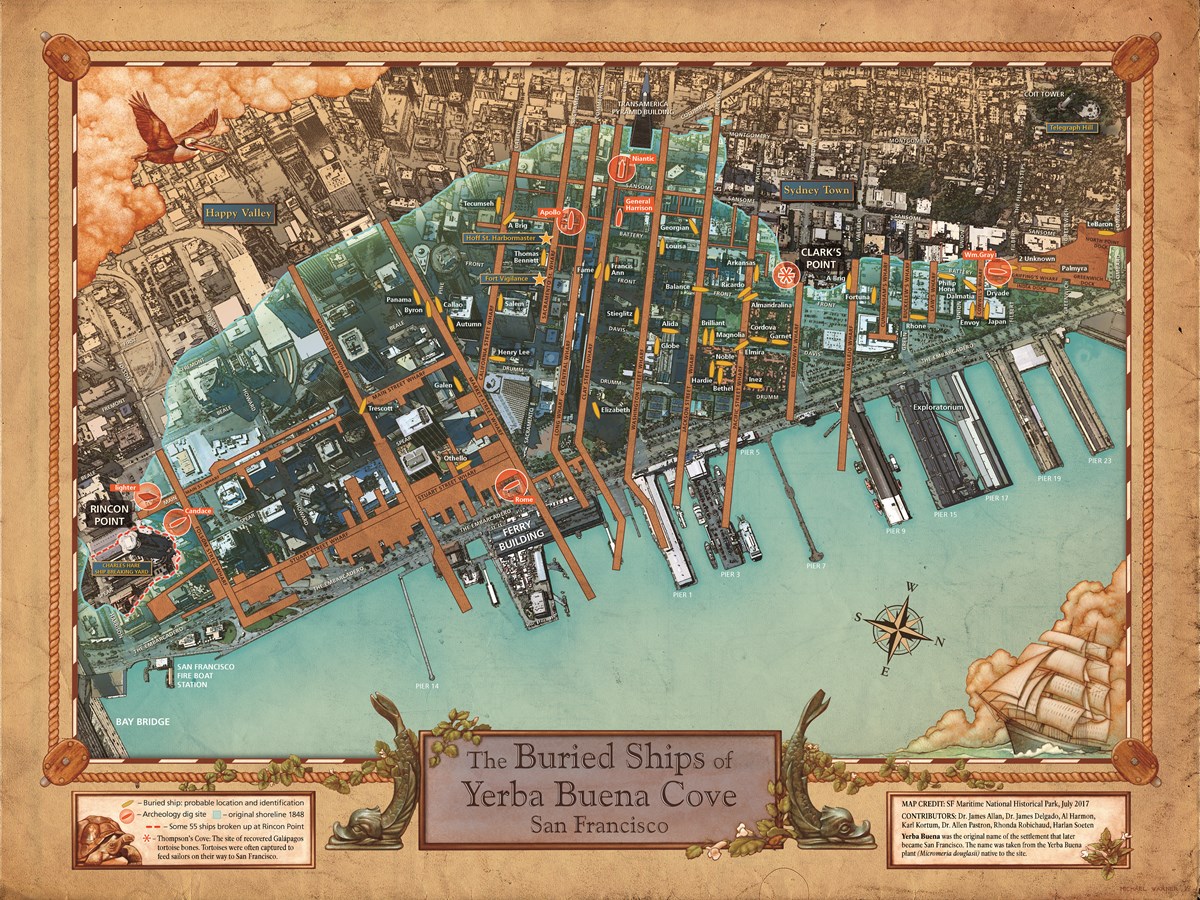 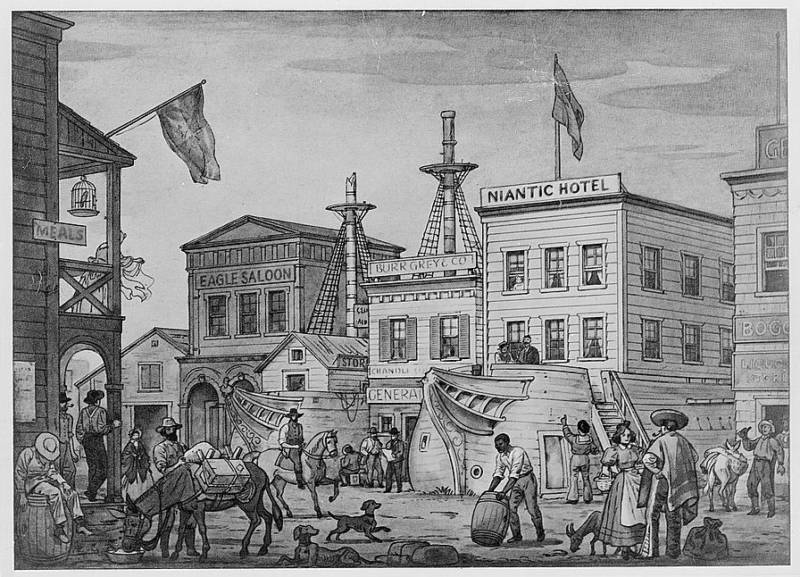 The Old Ship Saloon (built in 1851) was originally opened in the hull of a sailing ship, the Arkansas. The hull of this ship is now buried below paved city streets, but the saloon still operates in at street level in a building at the same spot 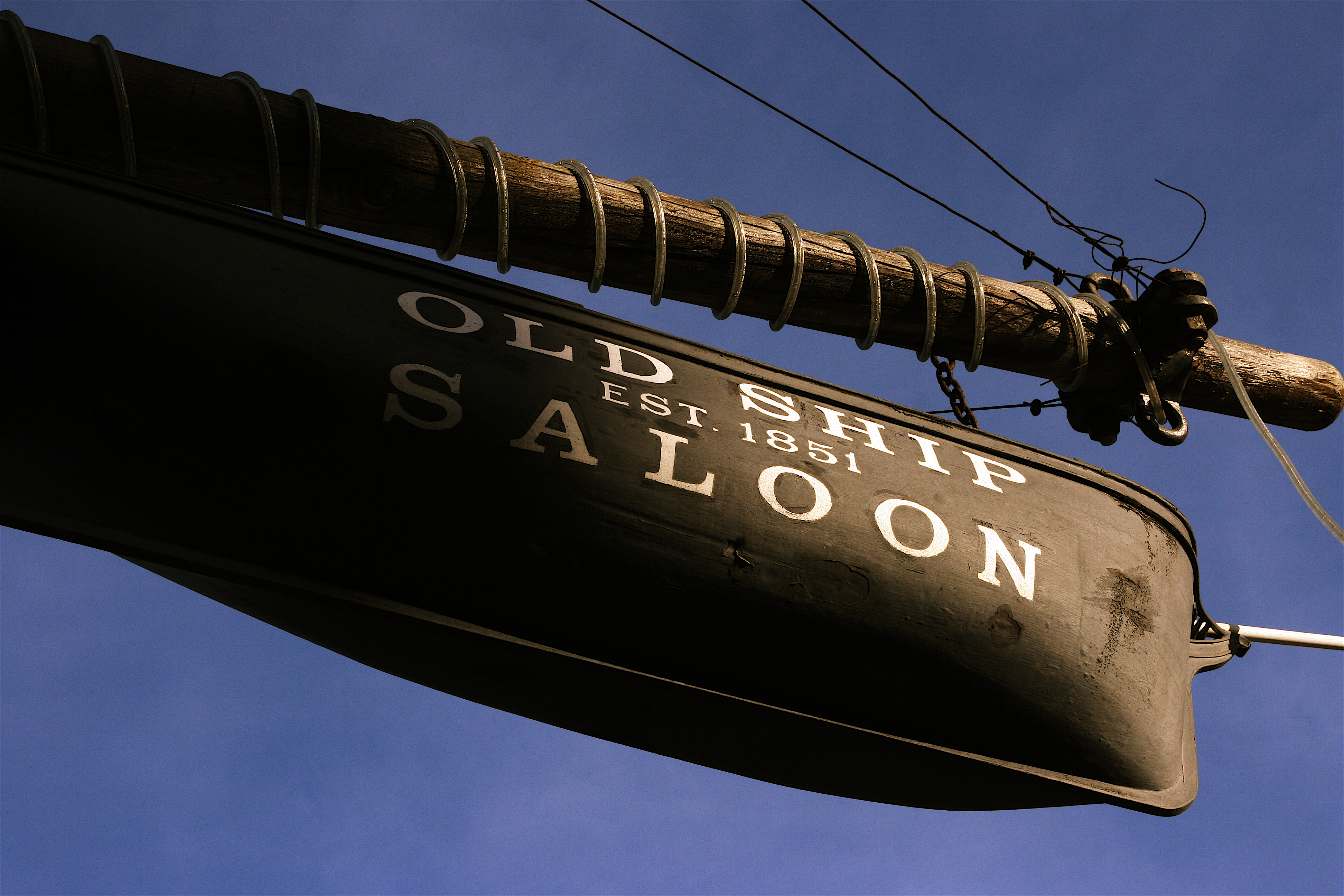 The waterfront area of Yerba Buena cove (San Francisco), as seen in 1851 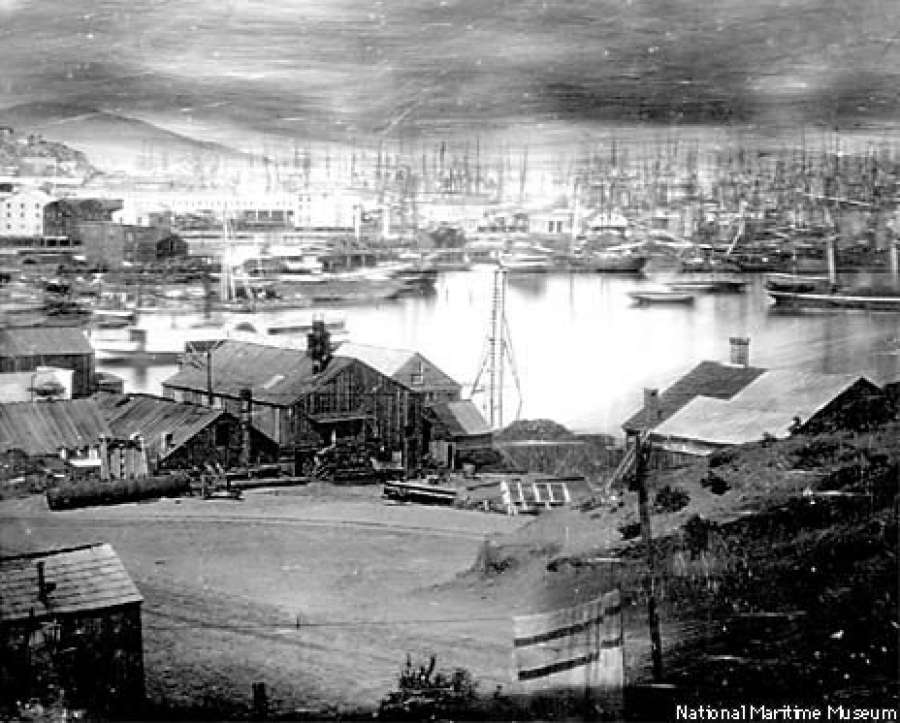 A clipper ship advertisement, which enticed people to book passage to sail to San Francisco during the Gold Rush of 1849 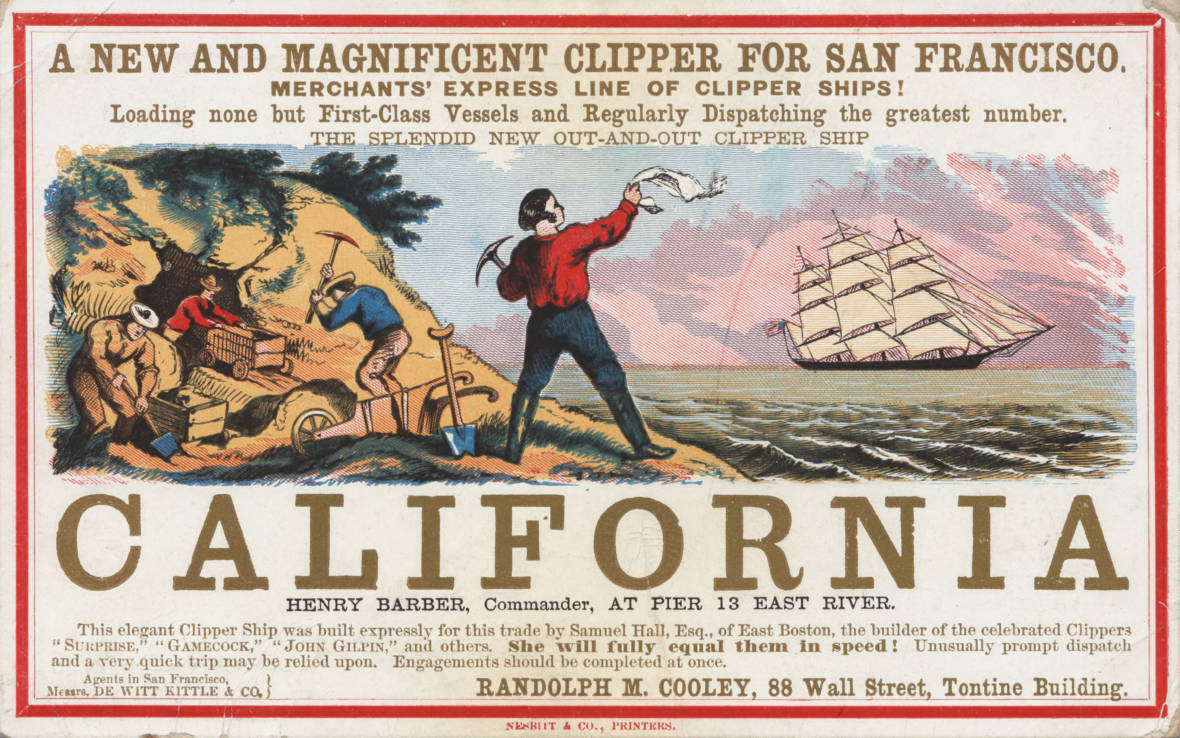 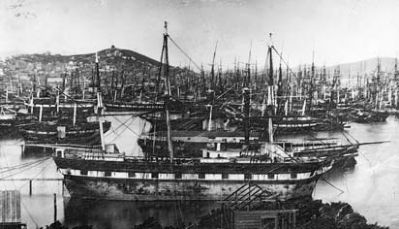 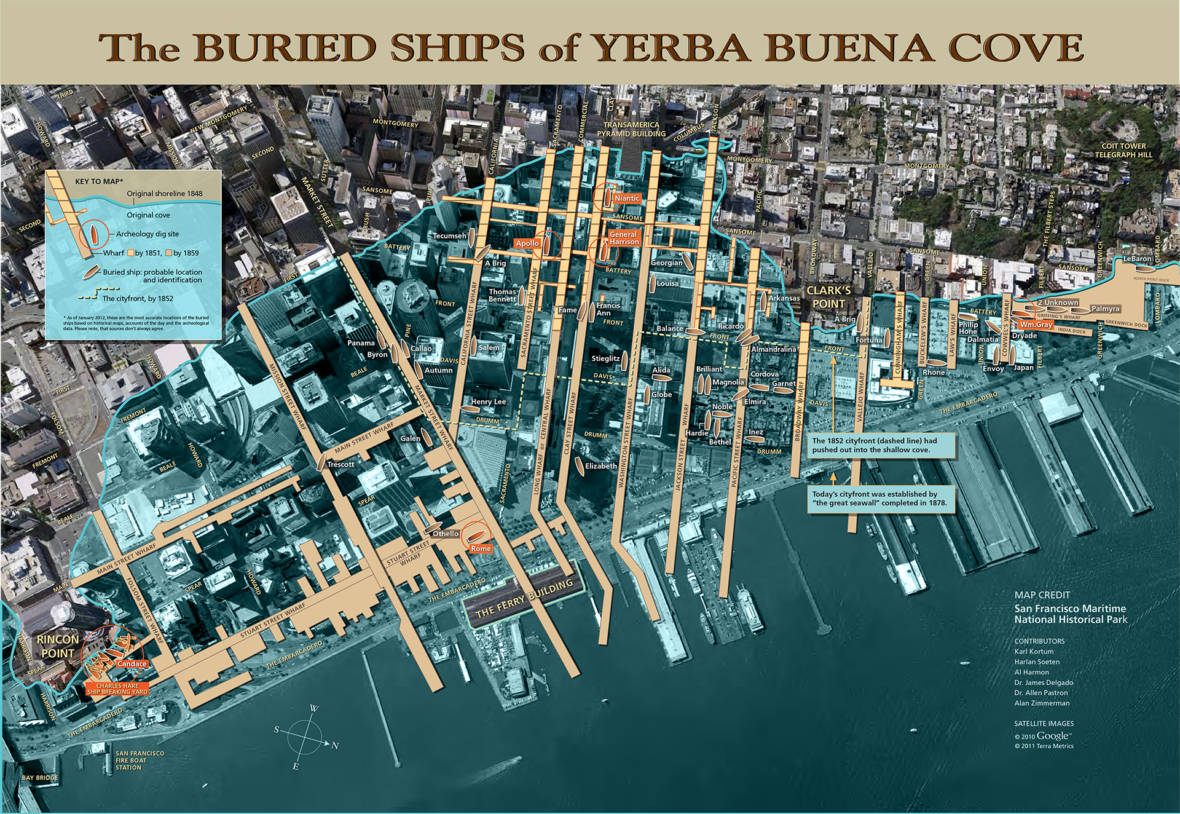 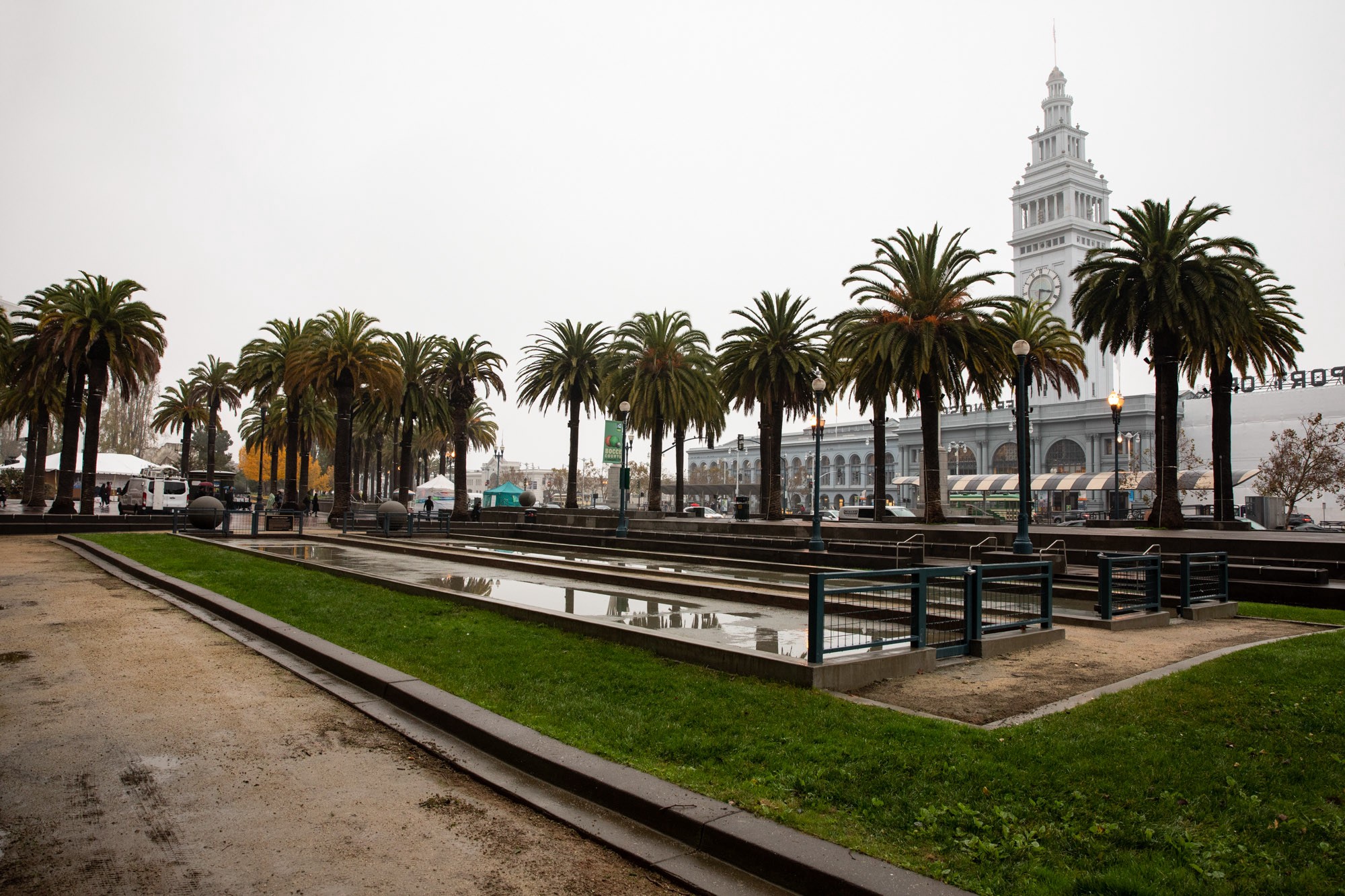 Some forty or more sailing ships are buried well below the city sidewalks and downtown streets of San Francisco. The historic ships date back to the Gold Rush of 1849, when thousands of ships came to be docked in Yerba Buena cove, as the San Francisco Bay waterfront was then known. The Niantic, a whaling ship which originally hailed from Connecticut, was one of the first of such vessels to transport people from the east coast of the U.S. to the Pacific coast during the Gold Rush.

Carrying miners and other gold rush hopefuls from various parts of the U.S. and the world, the ships which successfully reached San Francisco were often simply abandoned in Yerba Buena cove upon arrival, as people raced onward hoping to beat the competition. Many such miners did indeed make it rich from the discovery of gold, while a number of others died trying. In both cases, many such individuals never returned to their ships.

To deal with the abandoned ships in Yerba Buena cove, the Port of San Francisco encouraged people to purchase "water lots" above abandoned ships. This entailed hauling the ships further ashore, driving pilings and fences around them, and filling in the "water lots" with earth. By scuttling or sinking a ship, a person could claim land rights above the area where the ship was sunk. Subsequently, several of the abandoned ships in Yerba Buena cove were repurposed as warehouses for storing goods. Others were used to house new local businesses and social gathering places, such as saloons, hotels, stores, and even churches. The Rome was one such ship that was purposely sunk in this fashion so that its owners could claim residency within the city.

In 1851, a massive fire swept through Yerba Buena cove. The fire burned up the timber of the remaining ships down to the waterline, leaving only remnants of their hulls underwater and in some cases, preserving whatever goods they contained within. Eventually, this portion of the land that was once underwater in Yerba Buena cove became fully filled-in, paved over, and built upon. Meanwhile, the wreckage of the old ships and whatever cargo was still contained in their holds became buried underneath the city. So it happened that some of the streets within San Francisco's Financial District, as well as the major thoroughfare known as the Embarcadero, emerged upon land that was once part of the bay.

Today, detailed maps indicate where the shoreline of San Francisco previously existed, revealing that the high-water mark once extended as far as Montgomery Street during the Gold Rush era. Few people today even realize that many of the city's high-rise skyscrapers and iconic downtown buildings, such as the Transatlantic Pyramid, were actually built upon land that was once below the sea.

The first ship to be discovered under the city of San Francisco was the Apollo in 1920. Remnants of this and other Gold Rush era ships are now on display for visitors at the San Francisco Maritime National History Park. As part of the National Park Service, this maritime museum shares the history of the buried Gold Rush-era ships within the context of its larger role in interpreting the centuries-long history of San Francisco and the sea.