Deep into Cajun Country, a little town named Berwick resides with its 4,989 residents. The town of Berwick, Louisiana sits west of the Atchafalaya River, a tributary to the Mississippi River. It is the oldest settlement still present in St. Mary Parish, which allows a rich history to prosper. The Brown House, established in 1970, dedicates its walls to the stories of the citizens of the town, recent and old. It is the core of the annual Berwick Lighthouse Festival, which promotes the founding ideals of the town. With this great attraction, the history of Berwick, Louisiana is retained and carried through future generations all throughout South Louisiana.

The founders of the Heritage Museum pose in front of the official museum sign. 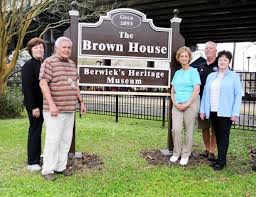 This beautiful house, built in 1893, contains primary technology and tools used from the Brown family, the original inhabitants of the dwelling. These residents were one of the first families to emerge out of this area. Every member of the family more or less stayed or visited in this house until 1970 when Dewey Brown donated the house to the Town of Berwick foundation. Over time, the Brown family preserved pieces of their family’s past, which was just as normal as any other family in the area. The family tried for years to open this museum officially, but funding and materials weren’t abundantly available. However, with the town’s help, the Brown family along with the historical society of Berwick was able to open this heritage museum to the public in 2019.

Since Berwick is a meager area, the Heritage Museum welcomes its visitors with a quick explanation of the town's origin. Discovered around 1797, the town emerged after white settler and land surveyor Thomas Berwick was granted land thanks to his dedicated work in advancing the Spanish territory of Louisiana, the authoritative identity at the time. Of course, the region was named after Berwick and his family, whose portrait hangs in the Brown House. The swamps and hooded trees of the Deep South didn’t exactly render the image of an ideal place to raise a family, so Berwick with the help of a couple of assistants, searched for an entry into an industry. Eventually, with the help of the Native American tribes, they discovered a vast, seemingly never-ending supply of shrimp available in the banks of the Atchafalaya River.

Thus, the settlement of Berwick, Louisiana grew in number over time. The Brown House, though not built until almost a century after the first white settlers arrived, was a stable structure that the community relied on. By means of the historical society of Berwick, the Brown House contains beautiful canvas snapshots of 36 oak trees in the town and lists more than 200 other trees present, the oldest of which dating back to 1790. Other displays include baskets, authentic wooden bowls, and archives uncovered by residents. One of the most striking exhibits is that of a display about children who came to the town on the Orphan Train. This event occurred as railroad lines were still developing, thus it was more of a march to Berwick and its neighbor Morgan City to satisfy the need for hands in the shrimping boats.

Lastly, several descriptions, photographs, and postcards from the past are shown detailing the original dwellers of the swamp, the Atakapa-Ishak Nation and Chitimacha Tribe. These Native American groups relocated to modern-day Houma, Louisiana area almost immediately after Thomas Berwick arrived. Their history unfortunately does not lie with Berwick, Louisiana, but it still exists. Hence, the Brown House is a quaint, fascinating little stop to make off of Highway 90 that informs the ancestry of one of the most devoted communities in the state of Louisiana. It is without a doubt an excellent sight to see.