This marker is part of a series of waterfront markers that were placed by the Port of San Francisco as part of its Bayside History Walk. Located on the sidewalk, each marker is a large silver and orange cylinder with navy blue signage featuring archival photos and historical details. The Italy Harbor historical marker tells the story of the Italian fishermen who were based in this harbor between 1889-1900, until their fleet was relocated by the Port of San Francisco in order to make room for steamships. The historical markers in this series collectively commemorate the 150th anniversary of the Port of San Francisco, offering pedestrians a brief history of the waterfront, including San Francisco's fishing industry, up to the present day. The Italy Harbor Historical Marker is located on The Embarcadero near Vallejo Street when approaching from the south. 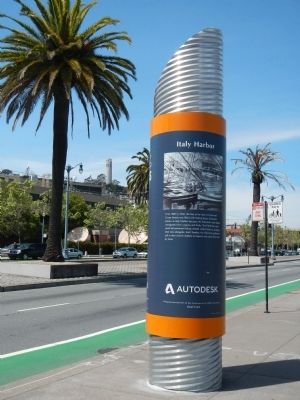 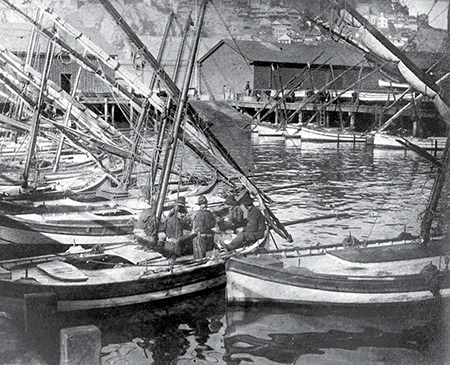 The Italian fishing fleet, circa 1900, upon being relocated to the area that later became known as Fisherman's Wharf 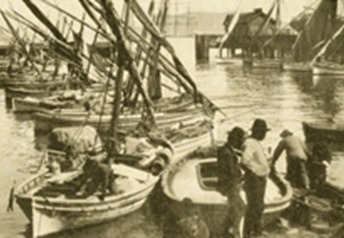 Italy Harbor Historical Marker (back side)

Series of historical markers along the waterfront, part of the Bayside History Walk which commemorates 150 Years of the Port of San Francisco 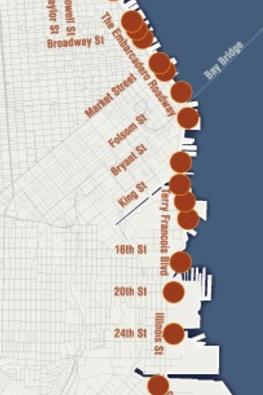 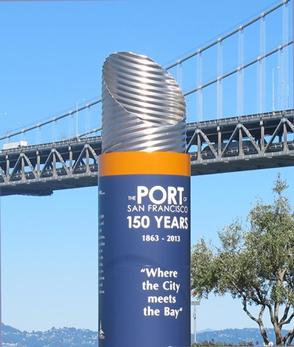 The recorded history of the port of San Francisco begins in 1775, when the first supply ship entered the port. However, the official establishment of the Port of San Francisco took place in 1963, this being the date when the State Harbor Commission was founded. In 2013, the Port of Francisco celebrated 150 years since its official beginnings by placing a series of commemorative historical markers along the waterfront near Fisherman's Wharf. These markers tell a brief history of the port, while also sharing information about the current state of the fishing industry in San Francisco and informing viewers of the current need to protect the Bay.

The Italy Harbor Historical Marker, part of the commemorative series of markers placed in 2013, includes an archival image of the original Italy Harbor. This image depicts the small, handcrafted Italian fishing boats called feluccas, which were docked in the harbor, circa 1890. The marker also includes supporting historical details that serve to bring this colorful maritime history to life. The following text appears on the marker:

From 1889 to 1900, the bay at the foot of Union and Green Streets became known as Italy Harbor because the fishermen were Italian immigrants from Liguria and Sicily. The fishermen used small sail-powered fishing vessels called feluccas, hanging their nets alongside. Each Sunday, the fishermen gathered, still in their church clothes, to inspect and repair their nets by hand.

The fishing vessels, or feluccas, were traditionally painted green. True to the local custom in their native regions of Italy, the fishermen in Italy Harbor usually included the name of a patron saint on the back of their vessels. It was thought that this patron saint would watch over their fishing expeditions, while offering protection and providing a successful harvest of fish.

Due to tight quarters in the harbor and the common occurrence of dense fog that is an inevitable characteristic of the San Francisco climate, the fishermen in Italy Harbor would often sing out loudly while sailing their vessels through the harbor. This practice, undertaken partly to lift the spirits, and partly to pass the time, also served an important purpose in ensuring that vessels would not get into accidents with other approaching boats. It has been noted that the arias of Verdi, in particular, could frequently be heard through the fog. Each captain may have also had a favorite tune that he sung most often, in order to identify his vessel's approach to other fishermen in the harbor.

By the turn of the twentieth-century, however, the entire fleet of first-generation Italian fishing vessels was relocated from the Italy Harbor to the relatively more protected inner lagoon at the end of Tyler and Hyde Streets. This relocation was undertaken by the Port of San Francisco in order to make room for the newer steam-powered vessels in the Bay. These larger ships required access to the deeper waters which naturally existed in Italy Harbor.

Upon relocating the entire Italian fleet of fishing vessels to the more protected inner lagoon, this new area subsequently became known as "Fisherman's Wharf." Today, Fisherman's Wharf is known the world over. It is also one of the most popular tourist destinations in downtown San Francisco.

Port of San Francisco and the Fisherman's Wharf Merchants Association

Port of San Francisco and the Fisherman's Wharf Merchants Association