Built in 1822 by William Montgomery, Buena Vista is a historic Federal style plantation house originally built in 1822. It is one of the early examples of elegant plantation homes constructed in central Alabama. In fact many of the materials used to build the home were made in Birmingham, England, such as the plaster cornice moldings. Today, Buena Vista is operated as a house museum by the Autauga County Heritage Association, and is also available to rent for weddings and other events. It was added to National Register of Historic Places in 1974.

A circular staircase spiraling twenty-four feet is a notable feature of the house. 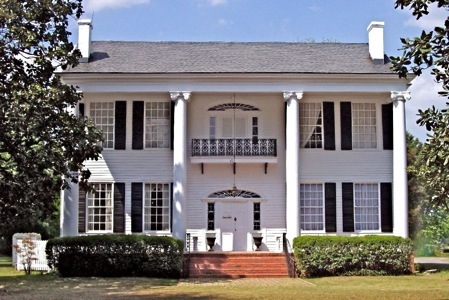 It is believed that Andrew Jackson, would become President in 1829, liked the staircase in Buena Vista so much that he copied it for his home, The Hermitage, which is located in Tennessee. William Montgomery was, apparently, Jackson's friend and it was later found that the staircase in The Hermitage was virtually identical to the one in Buena Vista.

*Please note that the Autauga County Heritage Association website is not working as of September, 2017.

Tuesdays from 10am until 2pm or other times by appointment