This tree along the Bethesda Trolley Trail near the National Library of Medicine building is a clone of the tree on the island of Cos, Greece, under which Hippocrates, the "father of medicine" is believed to have taught his students. In 1961, the Greek Ambassador gave a cutting from this parent tree to the National Institutes of Health on the occasion of the opening of the new National Library of Medicine Building. That tree died in 2013, but the NIH planted a new clone of the parent tree at the same site in 2014. A second clone of the Cos tree was planted in front of the NIH Clinical Center at the same time.

Tree of Hippocrates by Allen C. Browne on HMDB.org (reproduced under Fair Use) 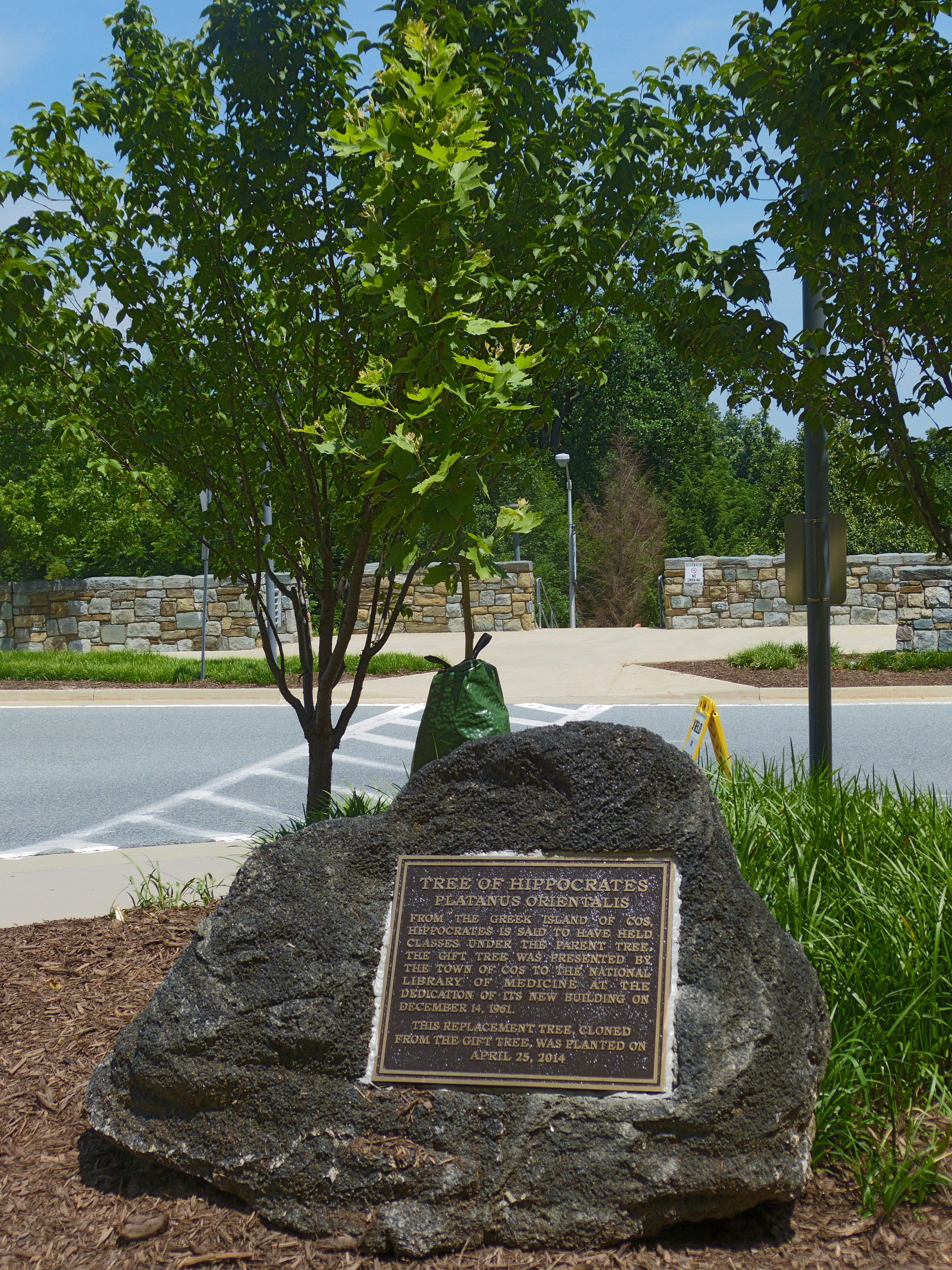 Original NLM Tree of Hippocrates, courtesy of NIH (no known copyright restrictions on US Government works) 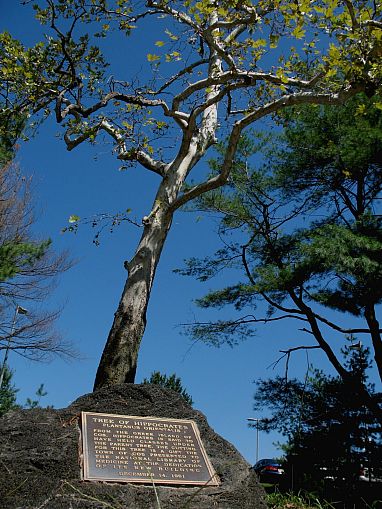 The tree is a plane tree or sycamore, with the Latin name Platanus orientalis. In 1961, Greek Ambassador Alexis Liatis presented the National Library of Medicine with the small tree. It was a clone from a tree from the island of Cos. The ancient physician Hippocrates (ca. 460-375 B.C.), for whom the Hippocratic oath of "do no harm" is named, is said to have sat and taught under the parent tree. The library's new building was dedicated on December 14, 1961. Frank B. Rogers, the library's first director, was part of a planting ceremony in the spring of 1962. The original plaque was on a pumice stone base.

A fungal disease to which sycamores are vulnerable took its toll on the tree's health from the 1980s onward. NIH Landscape Architect Lynn Mueller worked to keep the tree alive while also collaborating with the Champion Tree Project (now called Archangel Ancient Tree Archive) to create a clone. During the winter of 2012-2013, the original tree died, but still stood until 2013. The following year, The NIH planted two additional clone trees. One is here in front of the National Library of Medicine (the location of the original 1961 tree) and the other is in front of the NIH Clinical Center. April 25, 2014, Principal Deputy Director of the NIH Lawrence A. Tabak, Greek Ambassador Christos P. Panagopoulos, and NLM Director Donald A. B. Lindberg led the planting ceremony on April 25, 2015. During the ceremony, David J. Lipman, Director of the National Center for Biotechnology Information, also presented the DNA Barcode for the tree, demonstrating it as a clone of the parent tree. Amy Driscoll of the Smithsonian Museum of Natural History sequenced a sample from the first NLM tree.