This marker shares the history of a public railway line that was funded by Adolph Sutro, a German engineer and mining tycoon, in San Francisco during the 1880s. Known as the "Ferries and Cliff House Railway Line", or simply as the "Cliff House Line," it ran for three and a quarter miles. This steam railway line transported city-dwellers from downtown San Francisco west towards the Pacific coast. It made accessible several popular coastal attractions, such as the pavilion at Land's End Lookout, as well as the recreational swimming complex built by Sutro called Sutro's Baths. It also took visitors within steps of the Cliff House, a former restaurant that Sutro purchased and renovated as an elegant and family-friendly Victorian resort. Sutro's steam train line was eventually replaced by an electric streetcar line in 1905, which ran for another twenty years. The historical marker is located on Land's End Trail west of El Camino del Mar and north of Seal Rock Drive. 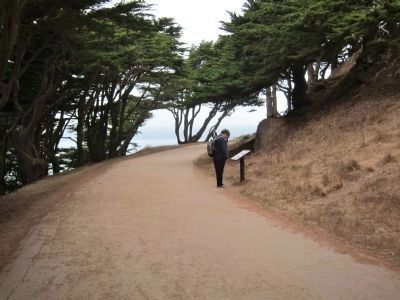 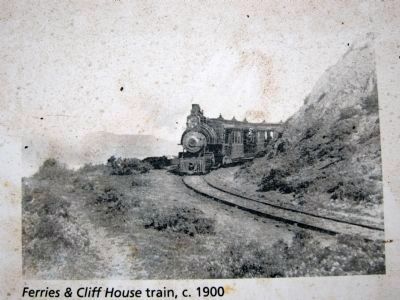 "Then and Now" comparison of the 16th fairway of the Lincoln Park Golf Course vs. the same spot during the era of Sutro's Steam Train 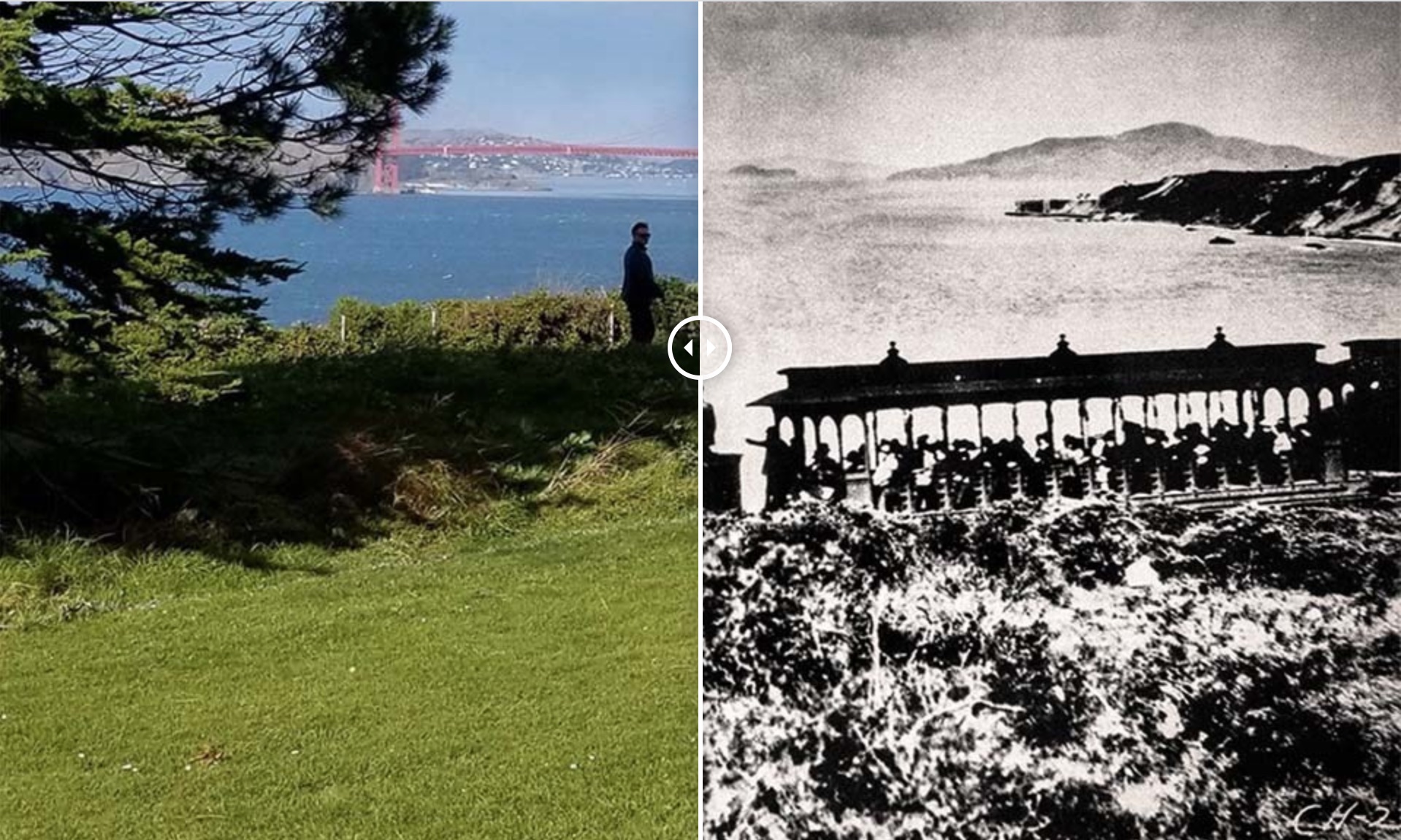 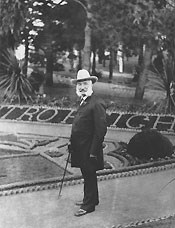 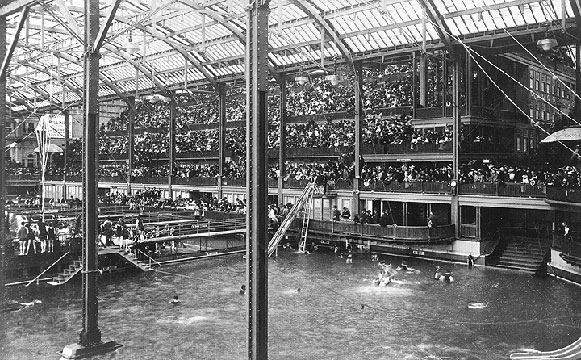 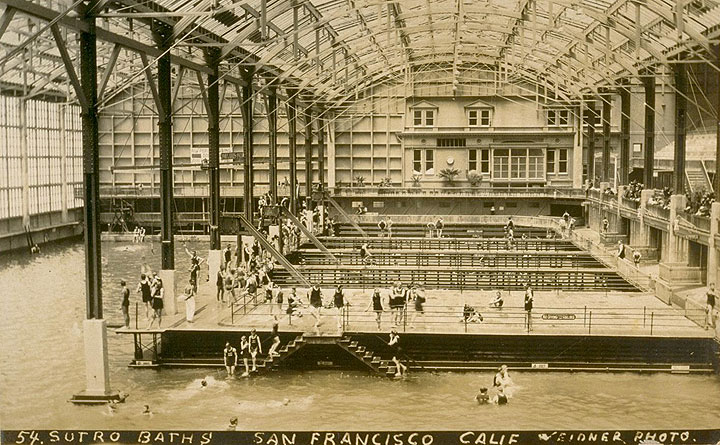 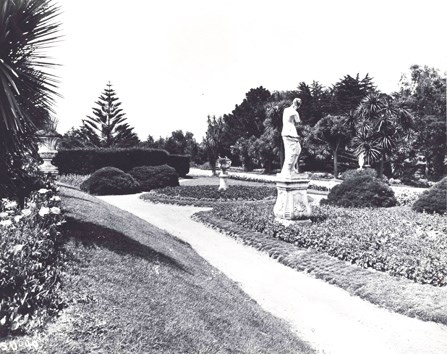 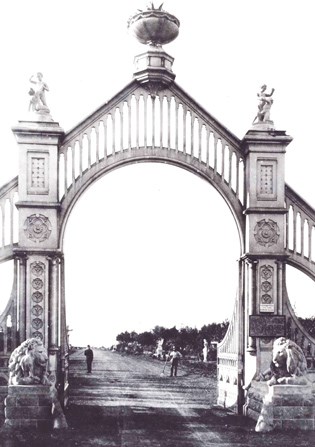 The rooftops of the historic Sutro Baths, c. 1890s 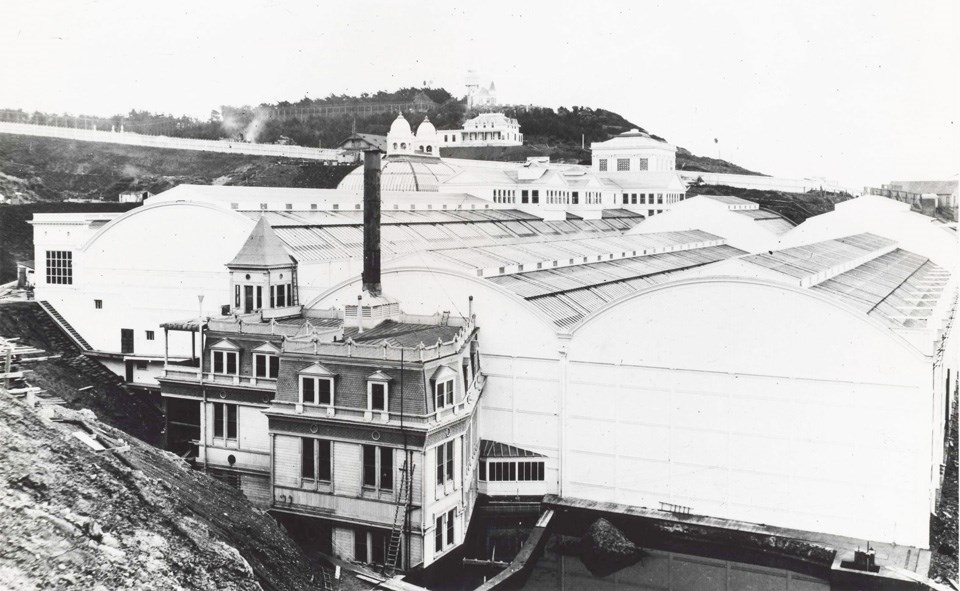 Adolph Sutro, a German-born Jewish inventor and engineer, traveled to the United States in 1850, living first in San Francisco while working as a businessman and engineer. He then traveled to Nevada, where he lived during the 1860s and 1870s. During this period, he acquired considerable wealth at the Comstock silver mines. Sutro was responsible for designing and engineering a massive tunnel that would provide drainage and ventilation for the mines. Known as the Sutro Tunnel, this impressive achievement was hailed for its success in improving the working conditions at the mine, thus directly benefiting the lives of the miners. Sutro's well-engineered tunnel succeeded in limiting some of the otherwise significant risks to the miners' health and safety. For this, as well as for his other later achievements, Sutro developed a reputation not only for his remarkable engineering skills, but also for his benevolence.

Upon returning to San Francisco, Sutro decided to invest much of his newly acquired wealth into real estate development along the Pacific coast. He purchased 22 acres of undeveloped land on the western edge of San Francisco. In particular, he sought to offer a source of much-needed recreation for city-dwelling San Franciscans from various walks of life. As part of his grand vision, he transformed the landscape around the Port Lobos area, creating several popular new attractions. These included the Cliff House, a run-down restaurant property which Sutro bought and renovated as an elegant, Victorian-style, family-friendly resort; the Sutro Baths, a huge indoor salt-water swimming complex for public health, exercise, and recreation. He also developed the Sutro Heights Park (better known as Sutro Gardens), a twenty-acre elaborate flower garden with walking paths, open to the public for quiet recreation and leisure.

To make each of these attractions more accessible to the public, Sutro funded the creation of a public railway line during the 1880s. It ran from downtown San Francisco west to the Pacific coast, approximately three and a quarter miles. He set a reasonable fare, charging only 5 cents per head to ride the steam train in either direction. Sutro's new public transportation option replaced an earlier private rail line, which had charged ten cents a head and was therefore unaffordable for most San Franciscans. Recognizing that this private railway rate was largely out of reach for the general public, he sought to provide a less expensive alternative.

Sutro's vision for his new public railway line also entailed offering a means of public transportation that would give greater numbers of people more opportunities for recreation, exercise, and leisure, specifically at the public attractions which Sutro built along the coastline. Before long, Sutro's steam train was transporting hundreds of eager city-dwellers and tourists on a scenic coastal route that boasted spectacular views and culminated in opportunities for waterfront recreation upon arrival.

Since all things have their day, however, Sutro's public baths, gardens, resort, and railway line eventually reached their end. In 1905, due to the greater use of electricity in public engineering projects, Sutro's steam railway line was instead converted to an electric streetcar line that ran along the same route. The tracks were replaced, and the paths were widened to make room for the stouter electric streetcars. This electric streetcar line was locally known as the "Cliff House Line", borrowing its nickname from Sutro's railway line which preceded it. It traversed eight miles and it ran for twenty years, until a landslide destroyed the tracks, thus permanently ending all means of public transportation along this scenic route.

Some of the attractions built by Sutro in the late 1800s as destinations for passengers on his steam train line were also lost to history. The Sutro Baths complex was destroyed by an unexpected fire in 1966, shortly after the property was purchased by a developer. The Cliff House is now under the care of the National Park Service and part of the Golden Gate National Recreation Area, with its current version featuring a neo-classical design which replaced Sutro's Victorian-style building after a fire in 1907. In place of Sutro's steam train line, a Coastal Trail was created. This trail currently provides a public walking and biking path that stretches for several miles. The Land's End Trail extends from the Coastal Trail, connecting pedestrians and cyclists to the Land's End Lookout. Along the way, historical markers such as this one provide visitors with an overview of this historic landscape. Its current use as a bicycling path and footpath for public recreation and exercise appears to reflect much of the same spirit as Sutro's original vision regarding public access, health, and leisure for all.