Built in 1678 and a National Historic Landmark since 1993, Smith’s Castle is now a historic house museum which has been owned and operated by the Cocumscussoc Association since 1948. Smith’s Castle began as a fortified structure built by Richard Smith Sr. sometime around 1637. This building was destroyed by a local Native American tribe, the Narragansett, in 1676 in retaliation for settlers’ attacks during King Philip’s War. Smith’s Castle was then rebuilt by Richard Smith Jr. and has survived to present day. It grew to a massive plantation of over 3,000 acres and was eventually reduced in size over the decades. Today, visitors stroll its gardens and embark on guided tours of the museum which preserves and interprets over 400 years of Rhode Island history.

The first iteration of Smith's Castle was more castle-like. 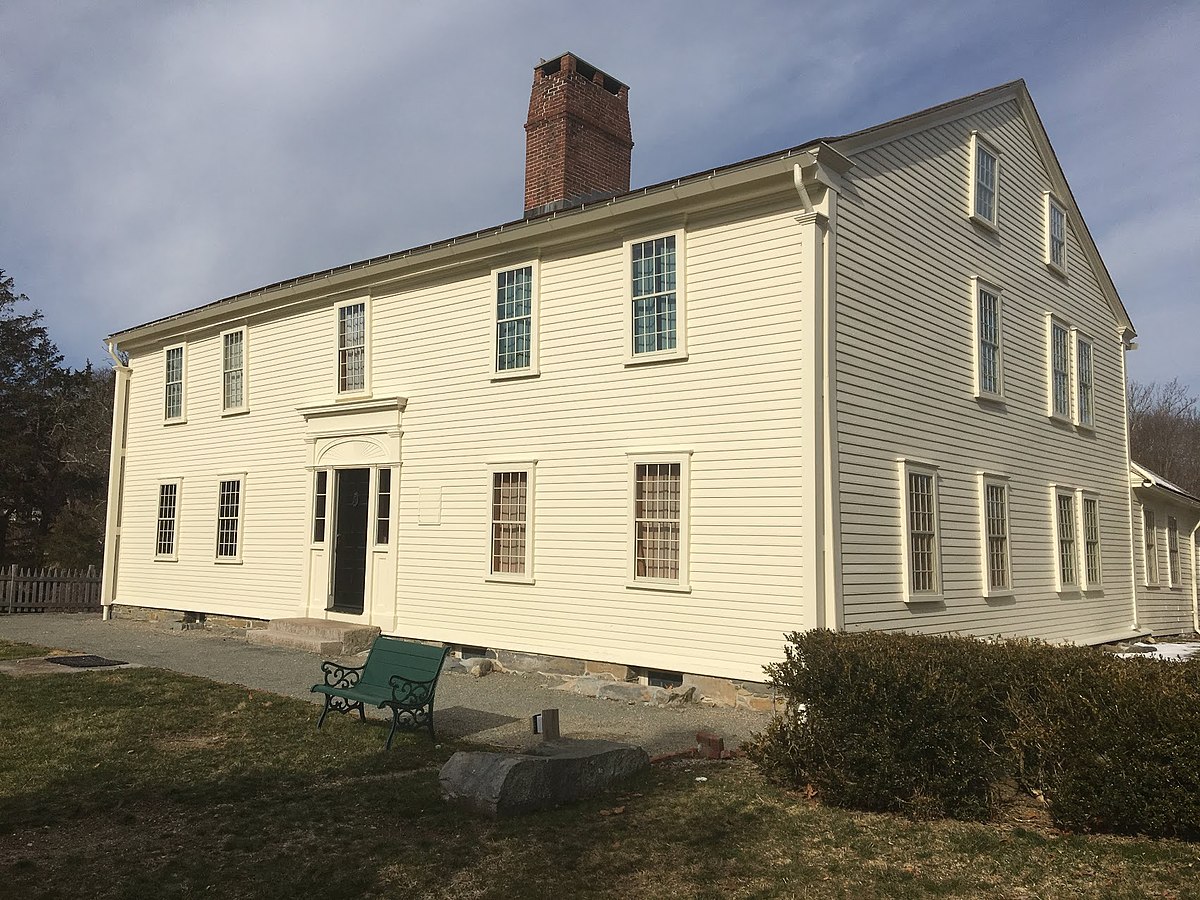 A view of Smith's Castle from the side with a garden in the foreground. 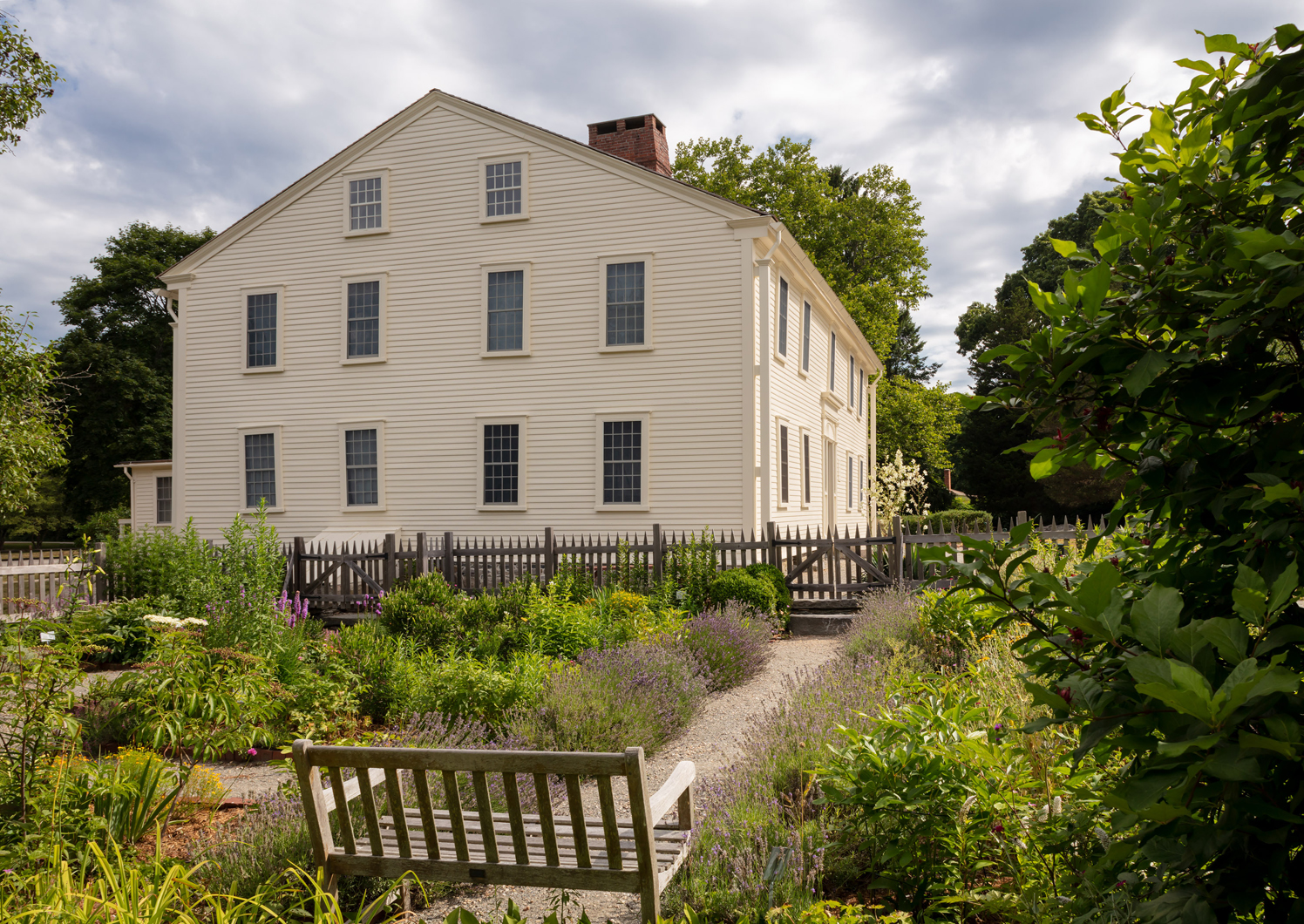 This 1905 postcard reveals how the castle has changed over the past century. 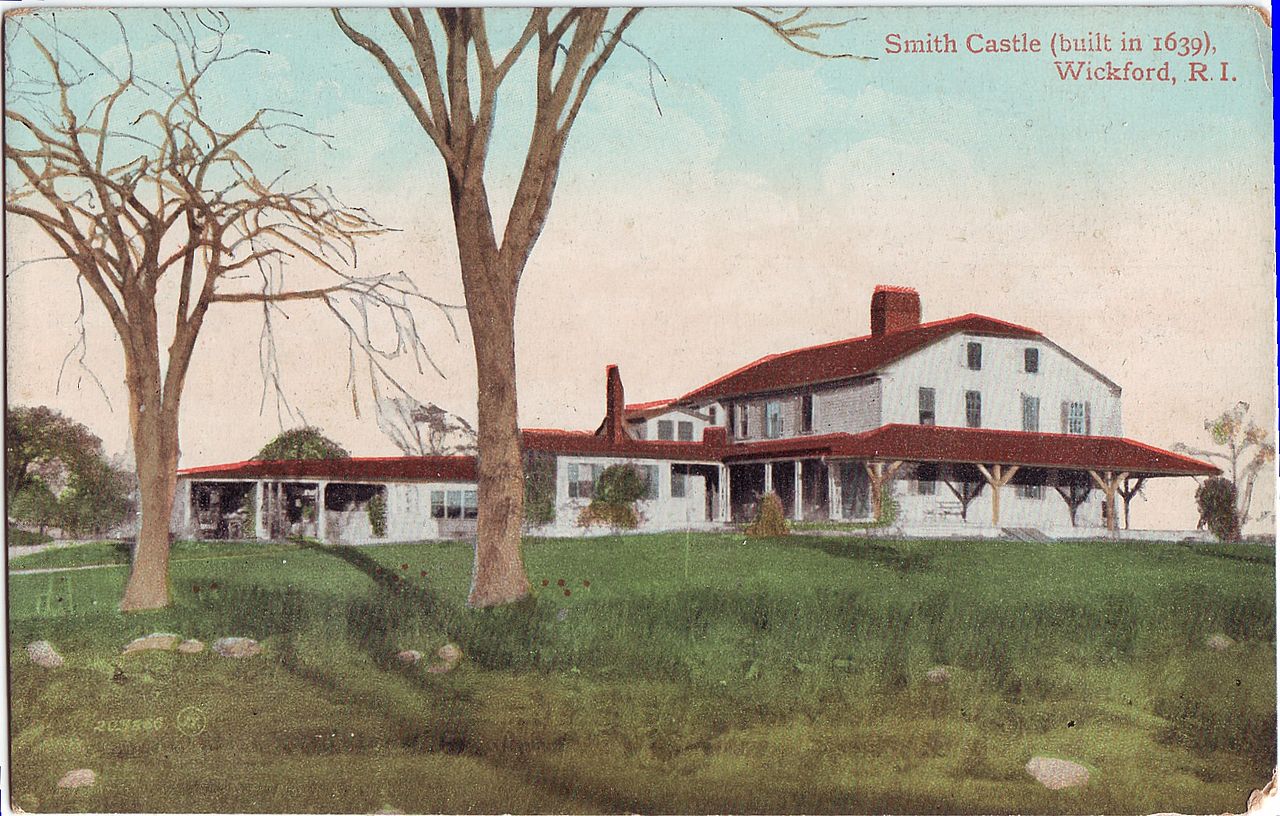 The memorial that marks the mass grave of the 40 soldiers killed during King Philip's War. 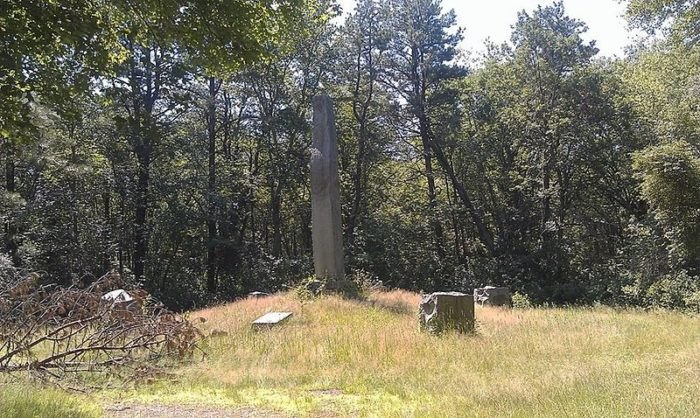 A spinning wheel sits in one of the rooms within Smith's Castle. 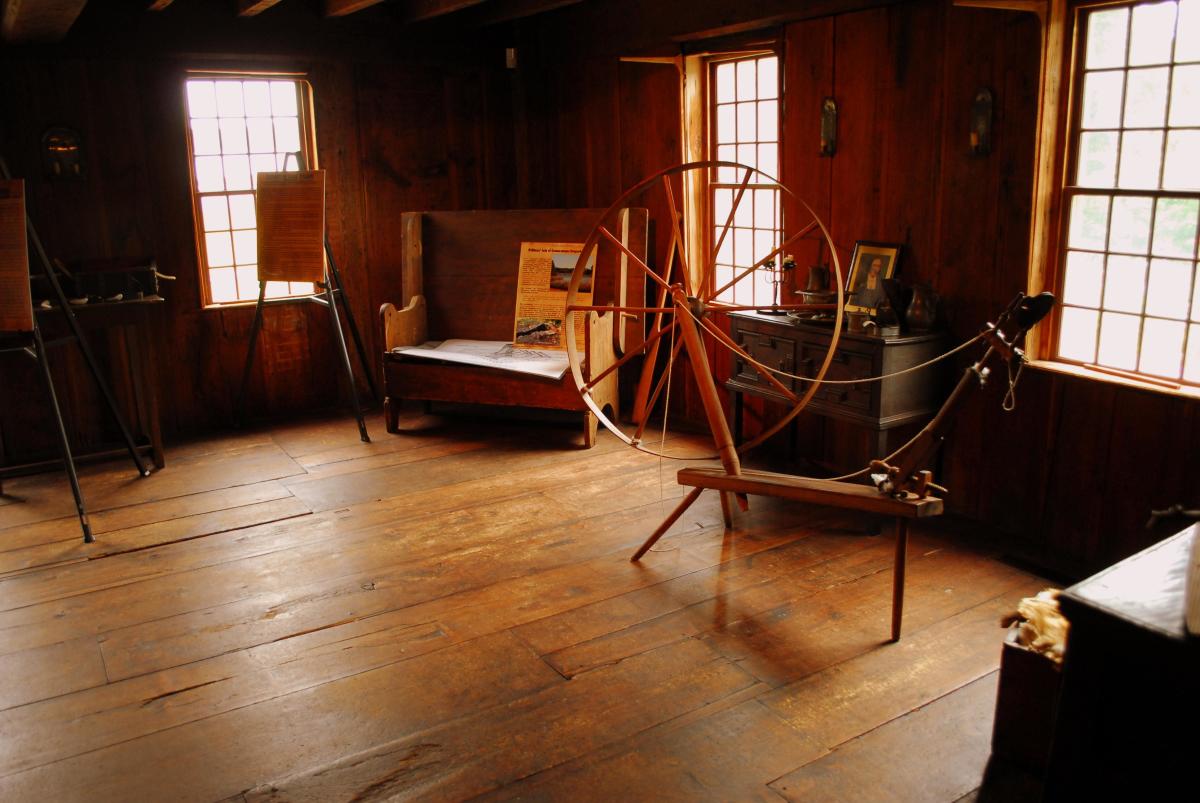 A close-up of the large fireplace in the castle's kitchen. 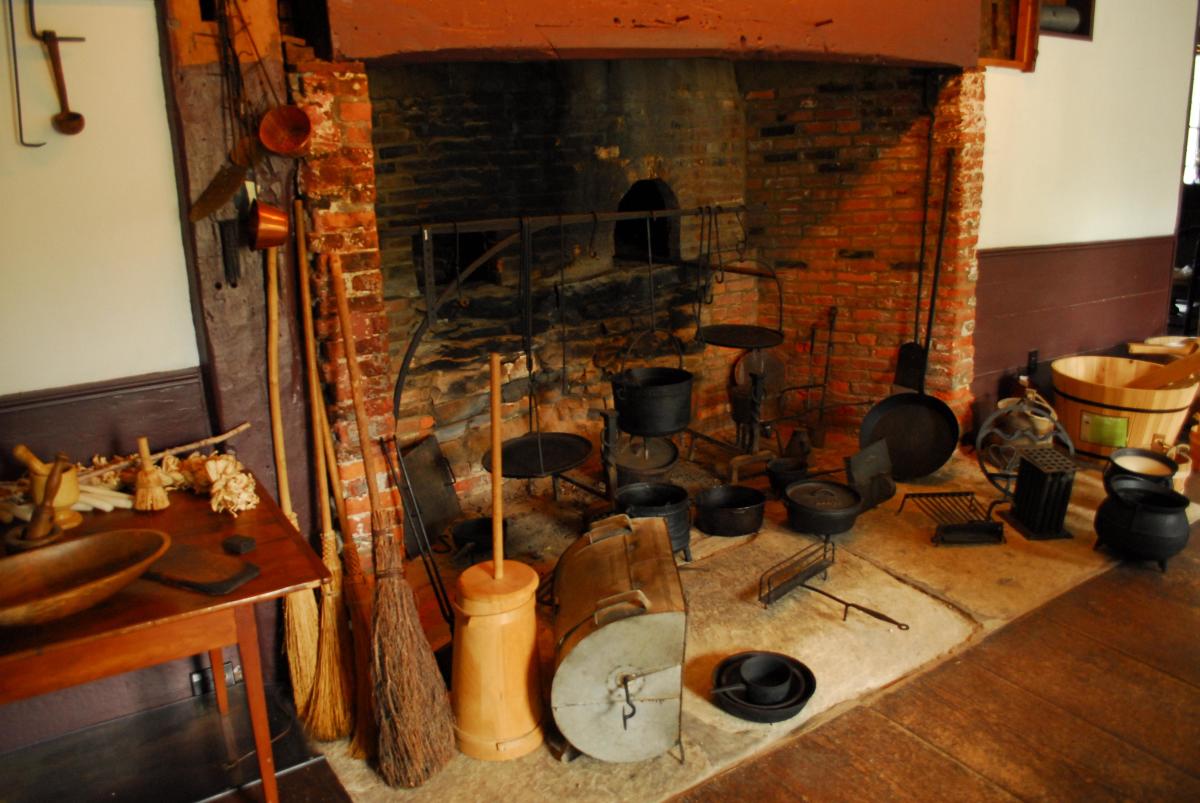 The founder of Rhode Island, Roger Williams, and Richard Smith Sr. arrived in the area called Cocumscussoc by the Narragansett around the same time in 1637. Williams established a trading post after purchasing land from the local Native Americans and Smith established his own soon after. According to Williams, Smith “put up…the first English house…in Nahigonsik countrey [sic].” This “English house” is thought to have been a large, fortified structure, hence the name, Smith’s Castle. Smith purchased Williams’ post in 1651, died in 1666, and left the home and trading post to his son, Richard Smith Jr.

In 1675, hostilities broke out between the white settlers and the Wampanoag tribe, known as King Philip’s War after the local chieftain. Smith permitted the local militia to muster on his property prior to attacking the Narragansett, thought to be providing refuge to the Wampanoag, within the nearby Great Swamp. While 40 militiamen were killed and buried on Smith’s property, the Native Americans suffered defeat and retaliated the next year by razing Smith’s Castle. By 1678, Smith rebuilt his home with a large, central stone fireplace, kitchen lean-to in the rear and a two-story gabled porch.

Smith Jr. died in 1692 and the property passed to his nephew, Lodowick Updike and his wife, Abigail Newton Updike. The Updikes turned their inheritance into a 3,000-acre Narraganset plantation which operated five farms using tenant farmers, indentured servants and up to 19 slaves as labor. The plantation was primarily a dairy and livestock venture which produced cheese, a few crops and a breed of horse known as the Narragansett pacer. Lodowick’s son, Daniel, extensively remodeled the castle around 1740 when he removed the façade gables and front porch and added an entry staircase, expanded the kitchen and paneled the interior walls. The house retains these renovations today.

In 1800, Lodowick’s grandson divided the property among his six sons, with Wilkins Updike receiving the castle and 300 acres. The property, in turn, was then sold to Benjamin Congdon in 1812 and reduced in size over the years until the castle and reduced acreage was sold to a series of short-term owners. Late in the 19th century, its exterior was renovated to a Victorian style and a wrap-around veranda was added. In 1919, the property was purchased by the Fox family and converted into a modern-day dairy farm. Fox developed a breed of dairy cow known as the Cocumscussoc Ayrshire. Fox died in 1937, the herd was sold off and farming ended at Smith’s Castle after 300 years.

The castle then went through a period of neglect and fell into disrepair during which it was vandalized and threatened with demolition. In 1948, concerned citizens created the Cocumscussoc Association in order to preserve the historically valuable property. They raised funds and purchased the castle and the two remaining acres for $13,000. The Association then embarked on an extensive renovation project prior to opening Smith’s Castle as a historic house museum in the early 1950s.

The Association also landscaped the property and planted various gardens, to include the Dye Garden with common plants used for dyeing, such as yarrow, musk mallow and nasturtium. The Eighteenth-Century Garden reflects a garden the Updikes would recognize with native trees, shrubs, flowers and herbs. Currently, Smith’s Castle is open for guided tours during the warmer months while its grounds are open year-round. It also hosts various special events such as its annual Strawberry Festival in mid-June. Please call or visit their website for event dates and times.

Poisson, Bonnie. "History Left a Definite Mark at this One Fascinating Spot in Rhode Island." Only in Your State. January 10, 2018. Accessed February 7, 2020. https://www.onlyinyourstate.com/rhode-island/history-ri/