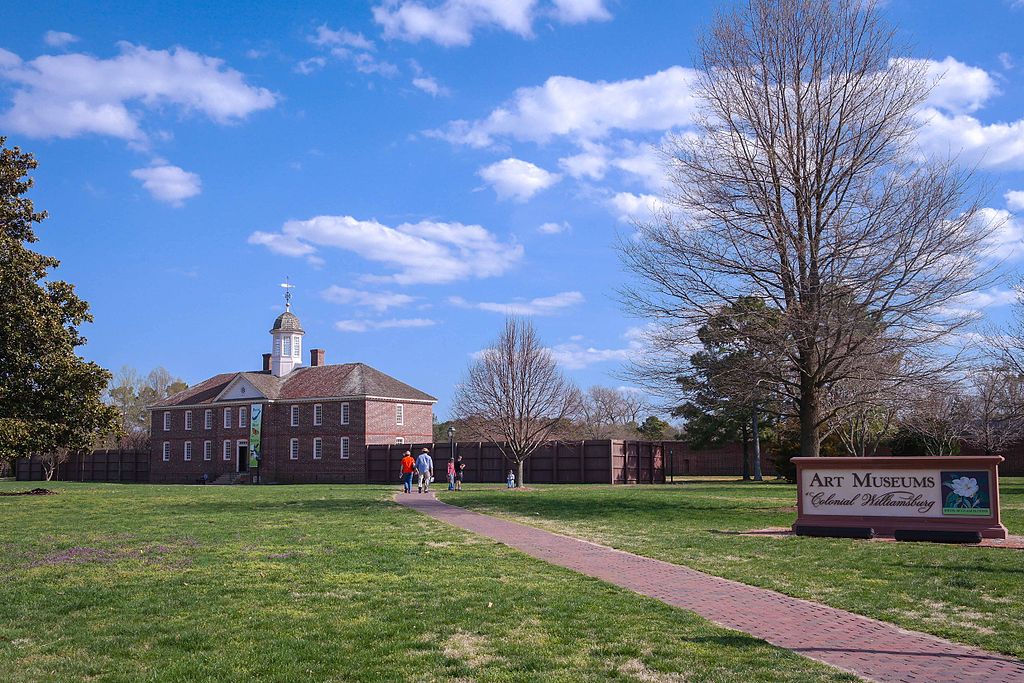 Over 8,000 objects are typically on display at the DeWitt Wallace Decorative Arts Museum, so take your time when visiting. The museum was founded with the help of a $12 million donation from the co-founders of Reader's Digest, the late DeWitt Wallace (1889-1981) and his wife, Lila Bell Acheson Wallace (1889-1984), in 1982. The Wallace's were friends of Laurence Rockefeller, whose parents were the driving force behind the creation of Colonial Williamsburg, and had enjoyed visiting the recreated colonial capital for the past fifty years.

A current exhibit showcases Colonial Williamsburg's extensive collection of military weaponry from eighteenth-century America. The French and Indian War and the American Revolution brought an influx of weapons from Europe to America with the British, French, and Hessian troops. The mishmash of muskets, swords, and bayonets is showcased here.

Another exhibit shows clues to the architecture of Williamsburg in the eighteenth century, taken from buildings being reconstructed at Colonial Williamsburg, like the Public Armoury. A similar approach is seen in the "Upholstery CSI" exhibit, where upholstery conservators use a non-invasive technique they invented and has now been adopted by other conservators. The Graves Approach seeks to restore furniture to its earlier appearance without marking or disturbing the framework or surviving upholstery fabric.

No, that is not a tricked-out coffin on display. It is an original eighteenth-century fire engine! After the Capitol building in Williamsburg burned in 1747, the vulnerable wooden town invested in this beauty, built in London by Richard Newsham's company in the early 1750s. The town splurged on a dozen leather buckets for their new fire engine. Back then, the responsibility of fighting fires was the public's, who formed bucket brigades.

One exhibit details how a combination of the many facets of Colonial Williamsburg came together for one of the latest reconstructions of an historic building - Charlton's Coffeehouse on Duke of Gloucester (known by the locals as "DoG") Street. Archaeological, architectural, archival, decorative arts and trades worked together to construct and furnish the building.

The Henry W. Weldon Gallery houses the Revolution in Taste exhibit, exploring how British subjects were exposed to a widening array of goods from around the world in the eighteenth century. Elegant dining, having tea, and drinking alcohol became the focus of social life in early America. Objects of ceramic, glass and metal from these social customs are displayed.

The museum is in the reconstructed Public Hospital of 1773, America's first mental health institution, also known as Eastern State Hospital. The original building burned down, and operations of the hospital had moved from the site between 1935 and 1970.

A lecture series and musical performances are held at DeWitt Wallace in the Hennage Auditorium. To be admitted, one needs a Colonial Williamsburg Admission Ticket, Museums Pass, or Good Neighbor Card. Daily, multi-day, and annual passes are available - see one of the links below.