From 1905 to 1925, an electric streetcar line carried passengers from downtown San Francisco west of the city to the lookout point at Land's End and along the coast. It took passengers past sand dunes, scrubby vegetation, and the spectacular scenery of coastal cliffs. Locally, it became known as the "Cliff Line". Officially, it was called the "No. 1 Sutter and California Streetcar Line." An old steam railway line previously ran on the same route, but this was converted into the electric streetcar line in 1905. This historical marker is visible a half-mile north of the Land's End Parking Lot. It is accessible via the Coastal Trail. 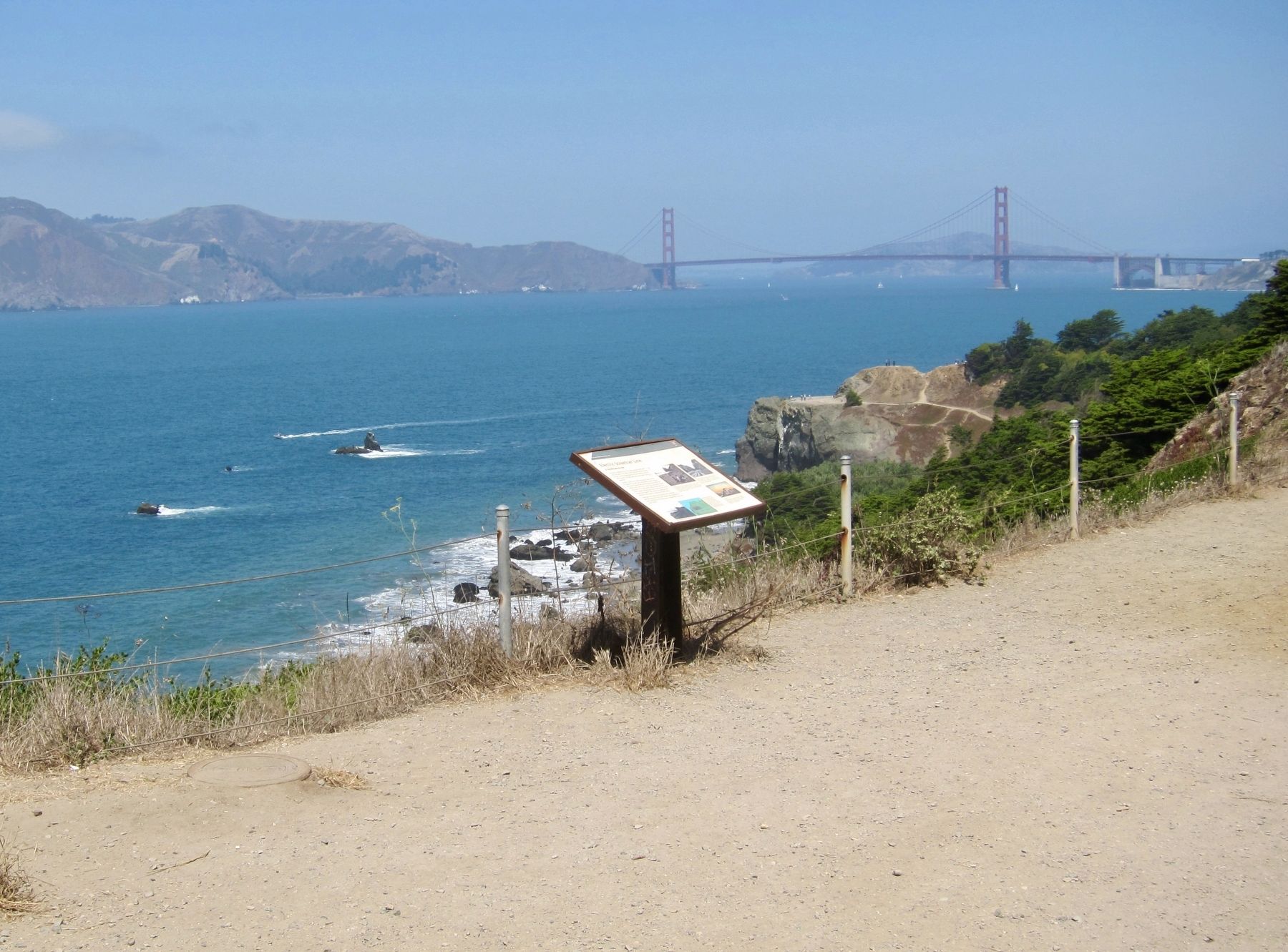 The Cliff House and Seal Rocks, Looking North From Ocean Beach (this image appears on the historical marker) 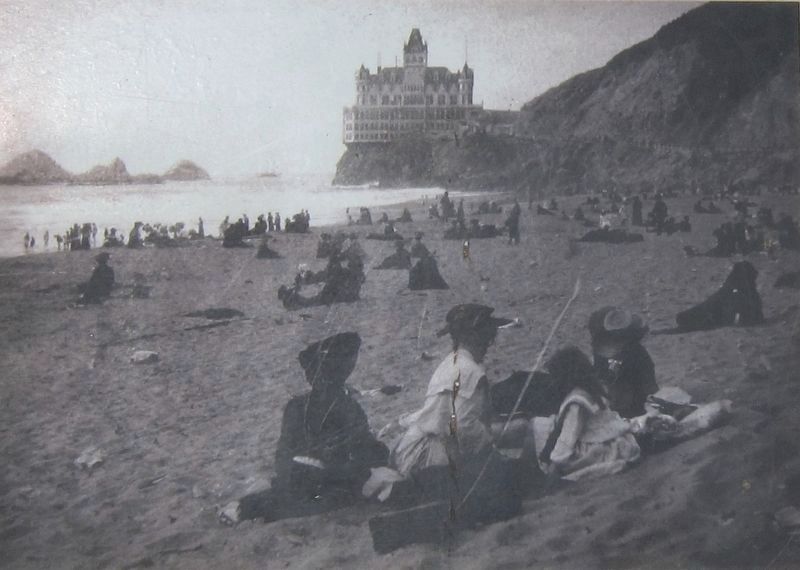 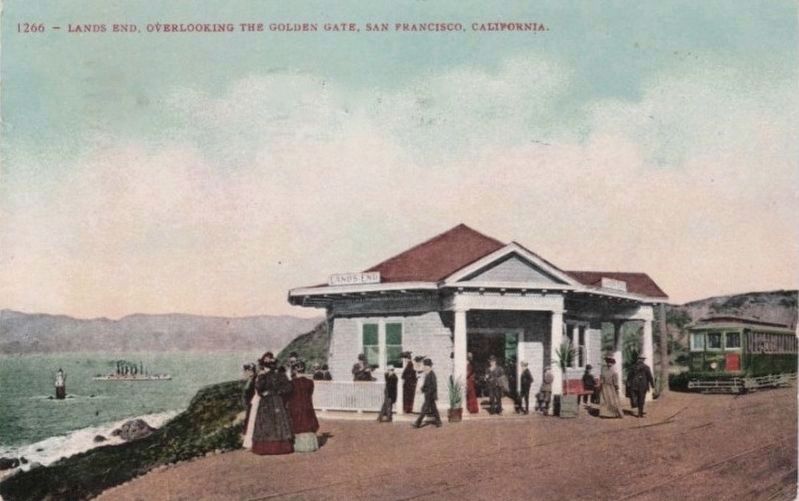 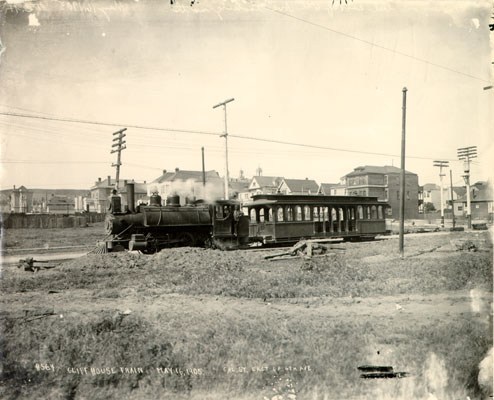 Converting the old Steam Train Line into the new Electric Streetcar Line by widening the path and replacing the tracks, c. 1905 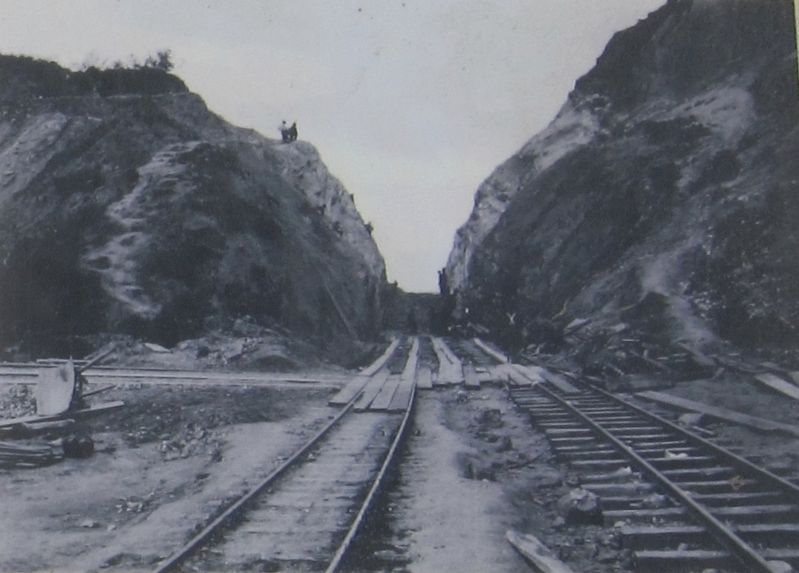 Coastal Trail traverses the same area where the "Cliff Line" used to transport passengers; some of the original route has been washed out due to landslides. 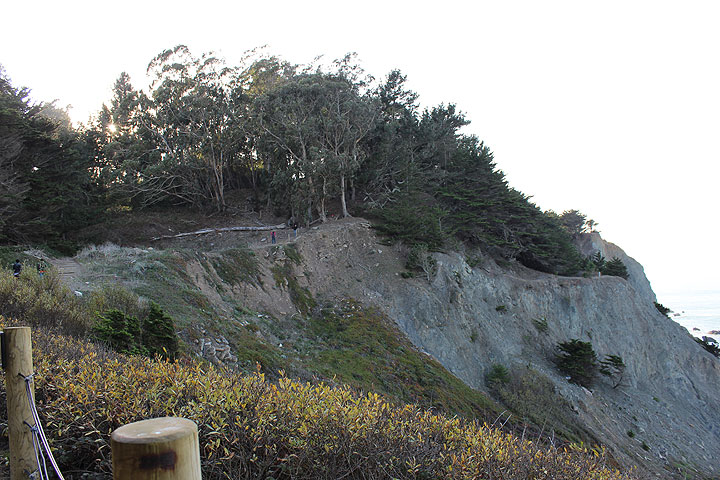 The Sutro Baths (c. 1940), built by Adolph Sutro. This indoor swimming complex was a popular destination for passengers on the "Cliff Line" 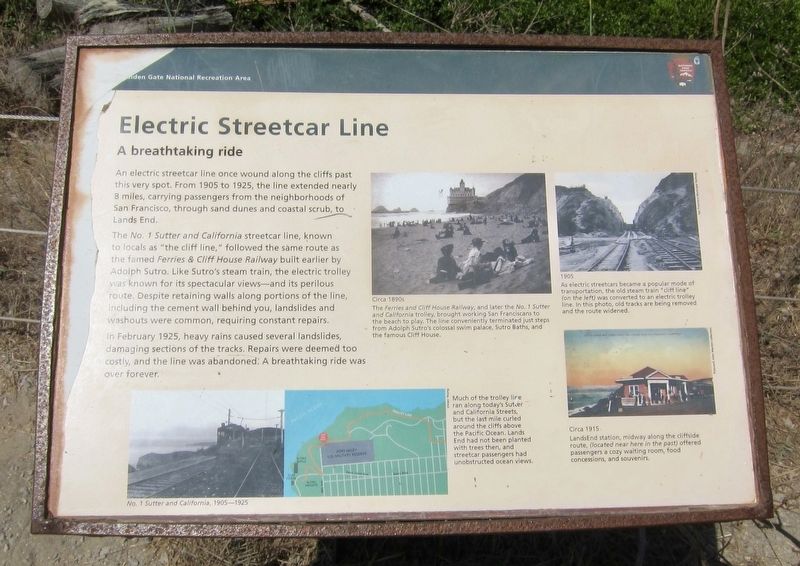 In operation for twenty years from 1905 to 1925, an 8-mile electric streetcar line transported San Francisco's city-dwellers westward to the windswept dunes and stunning ocean views of Land's End on the Pacific coast. Known locally as the "Cliff Line", this electric streetcar line carried passengers on the same rugged route as an earlier Steam Train line, "The Ferries & Cliff House Railway," built by Adolph Sutro, a mining engineer and entrepreneur. This scenic former steam train line was converted into the new electric streetcar line in 1905. At this time, the original tracks were removed and new tracks were laid, while the path was widened to make room for the relatively stouter electric streetcars.

During the early decades of the twentieth century, a burgeoning emphasis on outdoor recreation and leisure captured the interest and imaginations of many San Franciscans. People who worked hard each day in the warehouses, docks, and factories longed to escape the clamor now and then. For a modest fare of 5 cents per person, which was half the cost of the competing public transit offered by the Southern Pacific Railroad, the electric streetcar line provided a much-needed escape for an afternoon by the beach. Hopping on the "No. 1 Sutter and California Streetcar Line", as it was officially known, took city folks to the coast where they could relax, play, and socialize. It also transported people to one of the most unusual attractions in all of San Francisco, the Sutro Baths. Built by Adolph Sutro, the baths were part of a massive indoor swimming pool complex that was engineered to fill with ocean water. It was the largest swimming complex of its kind.

The new electric streetcar line, which replaced the old steam railway route that led to the Sutro Baths and Land's End Lookout, traversed a path that contained spectacular views, yet was also quite perilous. The route was considered treacherous due to the likelihood and frequent occurrence of washouts and landslides. Cement retaining walls did little to alleviate the risk. These constructed barriers required nearly constant repairs, as heavy rains continually sent mud sliding down the cliffs towards the tracks.

After twenty years in operation, a severe rainstorm in February 1925 caused a devastating mudslide, badly damaging the tracks of the scenic electric streetcar line. The cliff-side tracks were deemed beyond repair, given the considerable cost. With that decision, the "No. 1 Sutter and California Streetcar Line" ceased its operations and was permanently closed. Meanwhile, the electric streetcars from this line were re-routed away from the cliffside, for use on city streets. From then on, city folks used alternate modes of transportation, such as the automobile, to reach the coast and relax on the beach.

The scenic electric streetcar route which was once nicknamed the "Cliff Line" has since been commemorated with a historical marker placed about a half-mile north of Land's End Parking Lot, along the pedestrian-friendly Coastal Trail. Although electric streetcars no longer operate along this cliffside route, the Coastal Trail today affords an excellent opportunity for walking, biking, and otherwise taking in the spectacular sights and coastal scenery.

The historical marker contains several archival images of the area at Land's End Lookout. Included is an 1890 photograph that predates the electric streetcar, when Sutro's Steam Train line carried passengers to the coast. Beach-goers are seen picnicking and relaxing on the sand in late-19th century century fashions, with a dramatic view of Sutro's Cliff House resort in the background. A 1905 photograph shows the old steam railway line as it was in the midst of being converted into the new electric streetcar line, with the path being widened and tracks in the process of being replaced. A vintage postcard from 1908 shows a pavilion that once existed at Land's End Lookout for selling souvenirs and concessions to tourists and city folks. With these images and details, the historical marker transports modern-day viewers back to a time when coastal leisure was possible thanks to an affordable and scenic electric streetcar line.