The Central Park Zoo dates back to the 1850s and is one of the oldest municipal zoos in the United States. The state legislature officially authorized the establishment of a zoo in 1864, however, animals had been kept and observed in Central Park dating back to its origins in the 1850s. Prior to the official organization of the zoo, the park was home to an animal display known as "The Menagerie" behind the Arsenal. The zoo is one of the most beloved institutions in the city, however, it has faced significant criticism for its treatment of animals over the years. In response, the zoo has seen two significant redesigns as a result of these concerns to provide more space for the animals. The first redesign of the zoo occurred in 1934, and the second happened in the 1980s. Today, many of the larger animals are gone owing to space limitations. However, some popular exhibits from the early 1900s such as the sea lions still remain - a prominent feature from the 1934 redesign. The zoo's latest exhibition was installed in 2009 and features three snow leopards.

In its early form, the Menagerie at Central Park submitted animals to questionable treatment, as evidenced by this 1911 photo of a trainer and a dog perched on top of an elephant. Source: 1911 Department of Parks Annual Report. 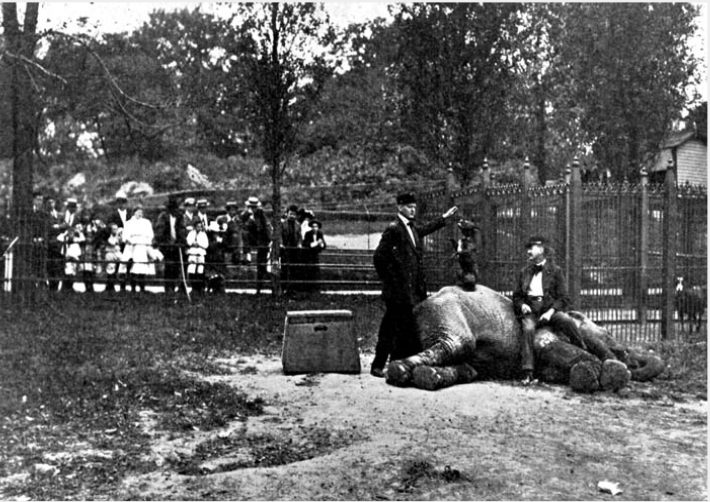 A large crowd gathered for the opening of the reopening of the Menagerie at Central Park, December 2, 1934. Photo by Alajos Schuszler; courtesy of the Parks Photo Archive, Neg. 4602. 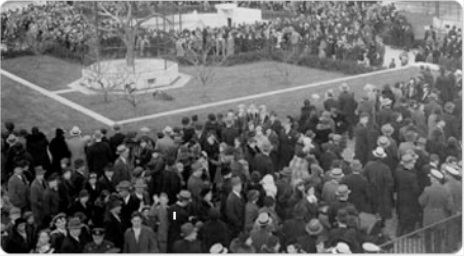 Mayor Ed Koch feeds a sea lion at the reopening of the Central Park Zoo, August 8, 1988. Photo, courtesy of the Parks Photo archive, by Simon Benepe 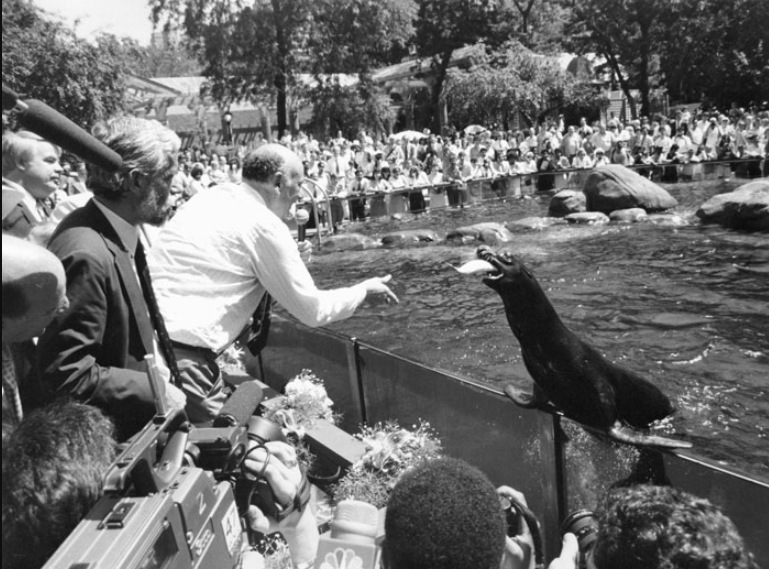 Central Park is regarded as one of the oldest municipal zoos in the United States. The state legislature authorized the establishment of a zoo in 1864; however, animals have been kept and observed in the Park dating back to its origins in the 1850s.

One of the first animals recorded on exhibition in the zoo was a bear cub that was left with a park messenger boy, Philip Holmes. The cub was initially exhibited at the park’s headquarters, The Arsenal. In 1861 state legislation approved the creation of an official zoo within the park, but the advent of the Civil War put off the actual development until 1864. In the meantime, a temporary collection of animals grew up behind The Arsenal and became known as “The Menagerie”. William Conklin was the Menagerie’s director from the 1860s to the 1880s. The Menagerie grew rapidly in popularity – daily attendance was 7,000 people by 1873 and annual attendance was reportedly three million by 1902.

From the 1860s to 1890s, prominent figures in American society made notable contributions to the zoo’s collection. General Custer gave the zoo a rattlesnake, and General Sherman offered an African Cape buffalo. In 1938, the City was donated a “tiglon”. Charles the Tiglon was the offspring of a female African lion and a male Siberian tiger (this combination was considered rarer than a “liger,” which results from the combination of a male lion and female tiger).

The Central Park Zoo underwent two major redesigns, the first in 1934 and the second in 1980. The first redesign was a result of heavy criticism regarding poor care and maintenance of the animals on exhibition. At the urging of Robert Moses (Parks Commissioner) and Governor Alfred E. Smith, a new zoo was designed by Aymar Embury II in a mere 16 days. Construction of the new, six-acre zoo took only eight months. The Central Park Zoo opened on December 2, 1934 and Governor Alfred E. Smith was designated honorary zookeeper. Some 12,000 invited guests attended the opening of the 1934 zoo, while 25,000 people lined Fifth Avenue hoping to be admitted.

By the 1980s the zoo had fallen into disrepair, it was even called “the Rikers Island for animals” by Parks Commissioner Gordon Davis. The City decided in 1980 to transfer management of the zoo to the New York Zoological Society and the zoo now led by the Wildlife Conservation Society. The question of how exactly to revive the zoo was publicly debated, some ideas included transforming the zoo into an insect zoo (due to the relatively small size of the plot) or possibly a farm for children raised into the City to learn about rural life. Both plans were ultimately cast aside. During the transition period, the zoo decided to transfer many larger animals to other, larger facilities – though kept the polar bears and sea lions. The zoo’s redesign took place from 1983 to 1988 at a cost of $35 million. When the zoo reopened on August 8, 1988 it was truly transformed. The architects worked to “make the zoo barless” and rearranged the exhibits by continents and biomes (the three biomes were – tropical, temperate, and polar).

Several of the Zoo’s animals became famous, or infamous, over the years. In the 1990s, two male penguins (Silo and Roy) “adopted” and looked over a baby penguin chick. Silo eventually left Roy for Scrappy, a female bird from SeaWorld. In 2009 the Zoo installed its first new exhibit since 1988, a snow leopard enclosure, at a cost of $10.6 million.