Home to Hall of Fame baseball player Walter Johnson, this Colonial Revival house in Bethesda is privately owned but includes a historical marker that shares the story of one of baseball's most legendary figures. Johnson was able to purchase the stately home thanks in part to a bonus he earned after winning the World Series. The record-breaking pitcher for the Washington Senators was also a personal friend of President Calvin Coolidge and one of the most famous Americans of his era. Johnson owned this house from 1925 to 1936, a time when this area was more similar to the farmland of Johnson's rural background than the current bustling DC suburb. The land parcel was much larger when Johnson lived here and included a windmill, baseball diamond, and small fields where he raised vegetables and small animals such as chickens. Later in the twentieth century the land was subdivided.

Walter Johnson House by Allen C. Browne on HMDB.org (reproduced under Fair Use) 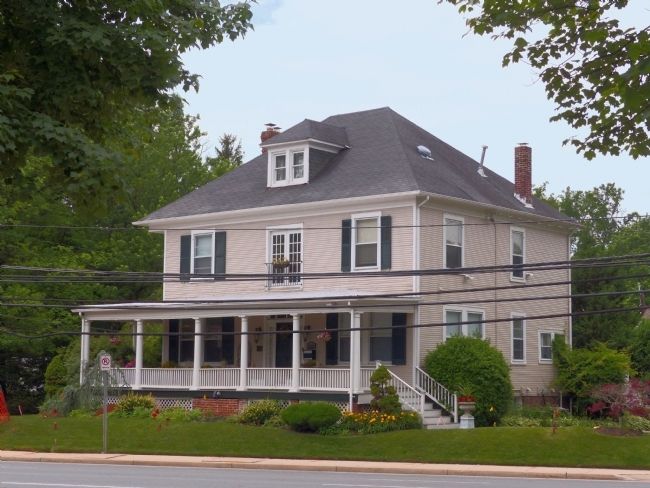 At the turn of the twentieth century, several land companies executed speculative building projects to create communities connected to Washington, D. C. by rail. Historically the area where this property sits was called Alta Vista. In 1901, the Creston Land and Improvement Company sold this parcel to Fannie Thomas; the land and building changed hands several times before being sold as the "Elisha Hanson Estate" to Walter P. Johnson in 1925. Johnson most likely purchased the property with money from writing articles and a bonus for winning the World Series in 1924. In the 1920s this area was much more bucolic, with the house and land demonstrating Johnson's status and wealth.

Johnson and his wife Hazel Lee had four children; Hazel Lee died in 1930 and Johnson's mother moved in to help care for the children. Johnson sold the house in 1936 to Harry Hoskinson and Eugene B. Casey, who subdivided the lot. The house and smaller lot on which it sits have changed hands several times over the subsequent decades. Even after selling the property, Johnson remained active in the community, serving as County Commissioner and running for Congress as a Republican candidate in 1940.

The house itself has changed little since the time of Johnson's ownership. It was constructed in the Colonial Revival style, specifically a pastiche of styles known as "Free Colonial" which incorporated Victorian architectural aspects as well. It rises two and a half stories on a fieldstone foundation and faces east, toward Old Georgetown Road and the historical trolley line. At one time the property had a baseball diamond, a grape arbor, and a windmill.

The home is listed on the National Register of Historic Places and is included in the Maryland Historic Trust. The property is privately owned and includes a small plaque.