The Peace Arch is monument erected in 1921 to commemorate the century of peace between Canada and the United States following the conclusion of the War of 1812 (1812-1815). As such, it is symbol of unity and continued peaceful relations between the two countries. The arch, which is listed on the National Register of Historic Places, is notable in a few ways. One, it stands on the actual border line (the respective customs and border protection facilities are located just to the north and south of the border). It is also very tall, reaching a heigh of 67 feet, and is a simple yet impressive example of Classical Revival architecture. It is situated in a 19-acre park and can be accessed from parking lots in both countries.

Built in 1921, the Peace Arch is large 67-foot monument commemorating the peace between the U.S. and Canada. 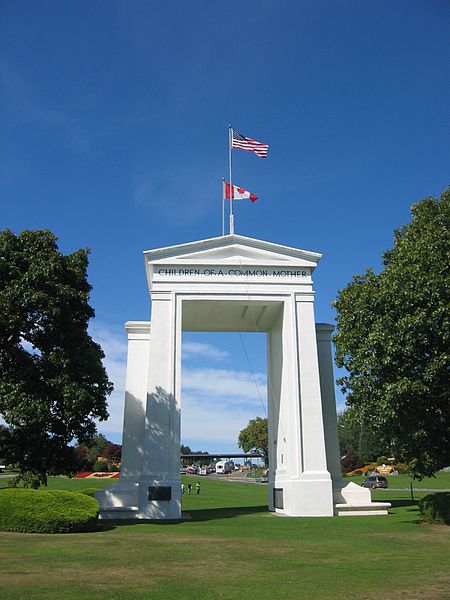 The idea for the arch originated from wealthy businessman, lawyer, road builder, and philanthropist Sam Hill, who was the director of the Pacific Highway Association at the time. Hill was a well-known figure in the Pacific Northwest, having built the mansion that is now called the Maryhill Museum of Art (in Maryhill, WA), promoted the construction of paved roads, and built a replica of Stonehenge (also in Maryhill). Hill was also a strong advocate for peace and admired the fact that the U.S. and Canada existed peacefully for so long despite having a long, unprotected border.

Hill paid for much of the arch using his own money. It was probably designed by architect Harvey Wiley Corbett, who was based in New York and a promoter of skyscrapers. The arch was built using 800 yards of concrete and fifty tons of steel. Half of it stands in the U.S. and the other in Canada. The park is divided into two: the Peach Arch Provincial Park (British Columbia) and the Peach Arch Historical State Park (Washington).