Located in the small town of Clinton, Mississippi, this restaurant has been serving food since 1870’s at two historic locations. First, a former livery stable built by a Civil War veteran. Second, a former hardware store. The history of 303 Jefferson reveals some hard truths and deep impacts from the Lost Cause movement and the Daughters of the Confederacy on the cultural history of the former confederacy. 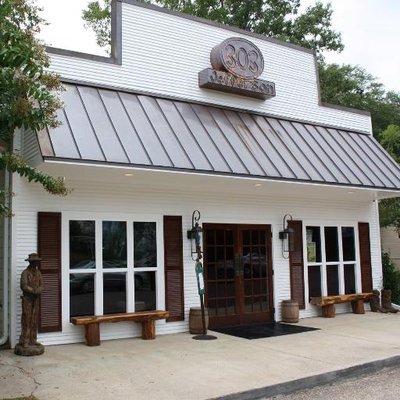 303 Jefferson is a restaurant in Clinton, Mississippi that opened in the post reconstruction south in the 1870’s. First accompanied by a livery, or a stable that horse owners rent a stall for on a monthly basis. During this time the restaurant was known as Lot 15, because on the city plans that was where it was located. The livery was built by, according to the website, “Civil War Hero, Captain William Lewis.” The restaurant served as a popular place for men to discuss news, politics, and horses. The house next to the livery which housed the restaurant was moved closer to the center of town. In 1921 the building was sold to two brothers who converted it to a bike and buggy shop. In the 1930’s the building was once again converted, this time to a hardware store. It was converted to a full-service restaurant in the 1970’s.

In the Chapter “Of Citizens, Persons, and People from the book These Truths by Harvard professor Jill Lepore, the author provides an overview of the social developments between 1865 and 1945. These social developments, specifically around race in the south is linked to the history of 303 Jefferson in particular and Mississippi more broadly. Understanding the racial history of the post-reconstruction south is key to understanding the history of 303 Jefferson as the town of Clinton, Mississippi was the location of a shooting at a political rally for an African American Senate candidate and in the following days many African Americans were killed, which reestablished the white domination in Mississippi.

On the website for the restaurant 303 Jefferson, located in Clinton, Mississippi, there is a brief overview of the history of the Restaurant, dating back to the 1870’s. This history discussed the transformations the location went through in 150 years and discusses its founder as a “civil war hero.” Upon further research the founder was in the Confederate Army, and this view of their history is likely the result of the Lost Cause and Daughters of the Confederacy movements from the time period. This website provided the details on the history of the site I needed for  my background, and coupled with Jill Lepore’s work and my knowledge of US History post-reconstruction I was able to provide the context needed to fully understand the location.