Lake Brantley High School is a part of the Seminole County Public School System and has been since it was built in the year 1972. It serves ninth through twelfth grade, and currently helps to educate nearly 2,000 students in the Seminole County school district. The mission of Lake Brantley High School, and SCPS, is to ensure that all students acquire the knowledge, skills, and attitudes necessary to be successful in adult life. 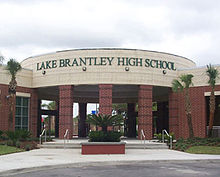 Lake Brantley High School is located in Altamonte Springs and is known for having an excellent academic reputation, strong athletic programs, and outstanding fine arts. They have the largest marching band in the state of Florida, with over three hundred students, and an active theatre program that puts on numerous shows per year. In terms of students, Lake Brantley currently teaches over 2,000 Seminole County Students and is in the top 20% of all Florida High Schools. They have a 90% graduation rate, and has maintained an “A” school rating for eighteen consecutive years. They continue to do their part in any way to educate and give back to the community.

The Lake Brantley High School official webpage has an abundance of different   information about the school itself, including how it serves the needs of over 2000 Seminole County students, as well as what alumni have accomplished. Lake Brantley is in the top 20% of all Florida High Schools and is recognized as one of America’s Most Challenging High Schools according to the “School Snapshot” tab on their website. It is also home to the largest marching band in Florida. This source remains relevant due to the variety of content it provides on how LBHS affects the community around it in a positive way.

The Seminole County Public Schools website offers up a lot more information on the community itself that Lake Brantley High School is a part of, in addition to stating who the current principal and administrative faculty members are. The page also displays the office hours, school hours, and a map to verify school zoning. It also has forms for students to access with registration requirements and other valuable tips, such as bus stops. This remains a relevant source because it covers not just Lake Brantley, but the school system itself. SCPS was rated an “A” school district this past year, and has been rated an “A” district for 18 years total.

The Lake Brantley High School page on Public School Review offers a lot of information on the current statistics of the public school, such as the number of students, number of teachers, graduation rate, and other performative academic numbers. For example. the graduation rate is at 90 percent, which is in the top 50 percent in the state of Florida as a whole.  This is relevant because it shows the positive impact that Lake Brantley has on the community of students it teaches.

The Lake Brantley Marching Patriots are the largest marching band in Florida, and they have received a straight superior rating for thirty five years at competition, which is a high honor. There are more than three hundred students, and it is made up of three separate symphonic bands, which is all made possible by parent volunteers. This is significant because it is such an important part of what makes Lake Brantley such a well-known school across Seminole County.

This U.S. News report provides an overview of how Lake Brantley compares to other high schools, and more significant statistics, similar to the Public School Review but on a more national scale. It ranks 2,184 nationally, but #11 in Orlando, FL area High Schools. I found this to be relevant as it provided a larger scale comparison than the other sources I looked at previously, and it is always nice to have another perspective.