Dedicated on September 11, 1959, this statue honor George M. Cohan who is known as "The Father of Broadway." Cohan was a renowned composer who authored numerous iconic songs and helped to build the genre of musical theatre. During his life, he wrote such influential songs as "Over There," the song that continues to represent the era of World War I in America. He also played a leading role in making Broadway seen as a safe location for tourists and families while simultaneously building Broadway as its own genre of performance art. To honor his work, this bronze statue depicting Cohan was created by artist Georg John Lober and architect Otto Langman and placed in Duffy Square in Manhattan. 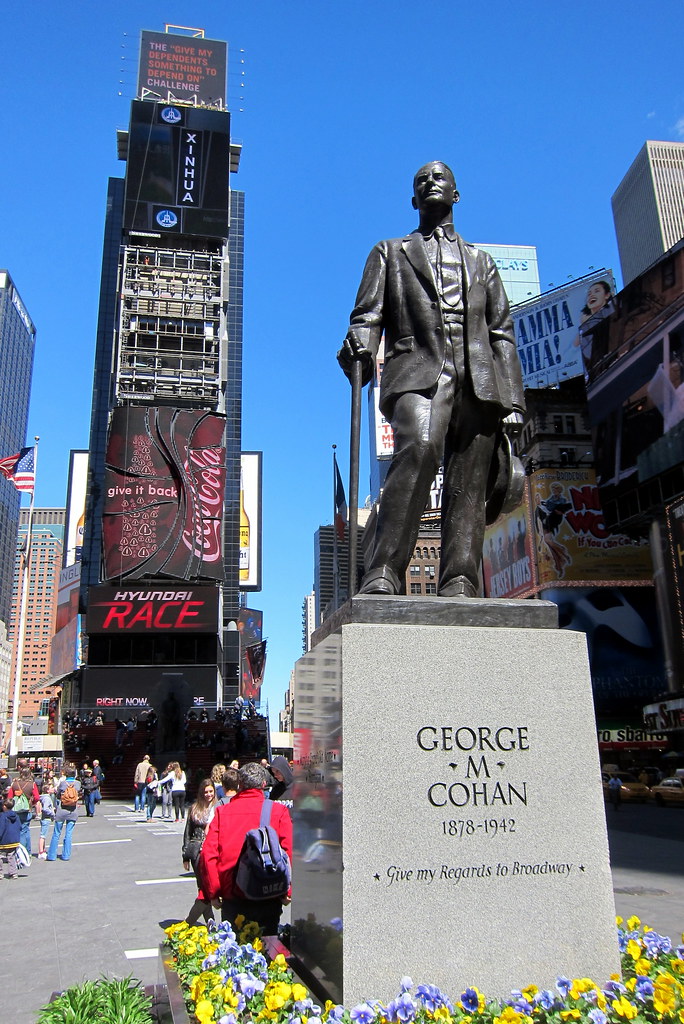 George M. Cohan was an American-born performer, playwright, composer, and producer. Cohan was born on July 3rd, 1878, and died on November 5th, 1942, at 64 years old. He was born to Irish-Catholic parents in Providence, Rhode Island. Though this was his place of birth, he did not stay in Rhode Island for very long. He spent the majority of his younger years traveling all parts of the country as a part of his family's traveling vaudeville act. This was his earliest exposure to the world of the performing arts, which would lead to a lifelong career.

Due to his constant traveling in his youth, Cohan was quite familiar with the ins and outs of how the country worked on a social and political level. Cohan was a very smart man, so he was determined to find a way to profit from his passion for the arts. Cohan learned at a very young age that there are few things that America as a whole loved more than America. America was a strongly patriotic country, and many things were fueled and funded through America's love for itself. Cohan's attempt at this was quite successful. Cohan was referred to by many as an "Anthem Machine." He had a keen ability to write unifying songs through the use of patriotic themes and melodies. Throughout his career, he pumped out these patriotic, foot-tapping tunes like clockwork. Not only were these songs featured in Cohan's countless Broadway musicals, but they were also often adopted by groups of soldiers fighting overseas as a type of war anthem. For example, Cohan wrote the tune "Over There" in the wake of World War I and claimed it was inspired by the sound and feel of a bugle call. This song quickly became popular and was adopted by the "boys overseas" as a marching call. This was due to his smart use of patriotic language, and integration of familiar sounds that could be indirectly related to instruments used by these soldiers. This song fueled America's love for America, and, through music, provided a way to unify the country during turbulent times. Smart decisions like this are what lead to Cohan being such an entertainment powerhouse during this era and for years to come.

Despite the majority of Cohan's legacy being centered around his iconic compositional works such as "You're a Grand Ol' Flag," "Yankee Doodle Dandy," and "Give My Regards to Broadway," Cohan was also a highly decorated performer. Cohan has been regarded as the premier musical comedy performer before 1925. Between his work as a performer, and composer, Cohan has had his hand in over 300 songs and 50 shows. This is huge because most modern composers and actors are known for, at maximum, 10 productions. Despite Cohan gracing the stage quite frequently, there are very few actual recordings of Cohan himself singing. Rumor has it that Cohan was not a huge fan of the sound of his own singing voice, so he steered clear of any recording studios whenever possible.

Due to his thumbprint on the creation of Broadway, as we know it today being so wildly visible, it is nearly impossible not to wish to honor him in some sort of way. What better way than a bronze statue erected right in the heart of the place he worked so hard to mold and create. Thus, the George M. Cohan statue came to be.

In this article. Bob Mondello eloquently details the life of George M. Cohan, specifically in regard to his theatrical achievements, and the events of his life that set-him up for his overwhelming success. Mondello comments upon Cohan’s sharp mind and ability to use his intelligence to not just write good songs but write songs that will last and be remembered. Mondello also discusses Cohan’s career as a performer, prior to his success as a composer and lyricist. This period of his life often goes under-discussed, with the majority of his lasting success being associated with his music.

Mondello does an excellent job at writing this article with a tone that makes the piece feel less like a traditional biography. This article reads more like a story. I can feel Mondello’s respect and admiration for Cohan. Due to this, it spiked my interest for analyzing this article. Mondello compares Cohan to several other cohorts that are credited with similar achievements, but then goes further to include why Cohan’s were not necessarily superior, but rather more significant in the grand scheme of theatre. Whatever the other guys have done, Mondello claims that Cohan has done the same things, but times 1000.

This particular article fits quite well into my umbrella theme of American History. Mondello goes into great detail about Cohan’s knack for writing American “anthems” that were often adopted by soldiers or other patriotic groups and individuals. Throughout our studies, I have seen a consistent lack of unification amongst all groups within the country. I see Cohan writing all of these anthems as a way to unify the Country to the best of his ability with music. By giving the country a catchy tune to inspire and unite every individual, the country could come together despite their differences, particularly in wartime America.

While the previous source focused in depth on the effects of Cohan’s accomplishments on the landscape of American patriotism, this article zooms in a bit closer on Cohan’s intended field of interest, Broadway. It will go un-argued that Cohan’s influence is unavoidable when maneuvering the performing world that is Broadway, especially considering the fact that he is the only individual memorialized with a public statue of this kind. The question of “Why?” often goes unanswered. This article, provided by PBS, does a great job at specifying why Cohan has been chosen to be memorialized in such a way.

This article goes into depth as to how and why his path of life molded him into a powerhouse in the world of theatre and performance. He started out in his family's traveling vaudeville troupe, so throughout his entire life he was exposed to and learned the ins and outs of what can be successful and what will inevitably become a failure. This early life experience trained him to be very intelligent with the projects he chose to take on. Based upon his knowledge of the industry, he was able to complete his career with a very limited number of failures. This article comments very heavily on his “immortality” in this industry, meaning his work and influence will never die and fade away. This point is emphasized by the statue erected in his honor.

This still relates back to American History, though. At one point in time, live theatre, particularly Broadway, was the pinnacle of American entertainment. Prior to Hollywood and television, live theatre was the only way to achieve that escape of storytelling and alternate realities. While Broadway is still up and running, it has become a bit more niche in its patronage. Broadway has also unfortunately become a bit tailored to the wealthy. Recently, prices of Broadway tickets have skyrocketed. Cohan did not come from a wealthy family, and was a proponent of theatre being for all. I am not sure how happy he would be with the direction that Broadway is headed.

In this review of Ward Morehouse’s biography on the life of George M. Cohan, Channing Pollock reflects on the lasting effect that Cohan has had on the theatrical community. By analyzing Morehouse’s biography of Cohan in comparison to the plethora of other literary works he has produced, Pollock could more clearly recognize differences in Cohan’s legacy versus other Broadway legends.

Pollock recognized Morehouse’s ability to separate his own self from his opinions on theatre and his work. This is important because Pollock recognized a distinct departure from this within his biography of Cohan. She commented on how personal this biography was in comparison to the majority of his other works. Pollock attributes this shift in style to the overwhelming respect that Morehouse has for Cohan.

This could be very useful within my project, because the main question I am attempting to answer is, “Why is Cohan’s legacy so important that out of all theatrical pioneers, he is the one memorialized with a public statue on Broadway?” If a renowned theatrical critic was willing to abandon his traditional style out of respect for Cohan, that emphasizes just how powerful of an influence Cohan had on Broadway.

In this biography on the life of George M. Cohan, Reside candidly walks the reader through the career of Cohan, and moves on to infer the reasoning and justification for his lasting success. The respect the Reside has for Cohan is quite evident through the use of his highly complementary language and respectful tone.

Rather than just giving the reader a traditional event-by-event style biography, Reside goes a bit further to analyze how Cohan utilized skills that aren’t based in theatre to enhance the success of his theatrical career. For example, his business-savvy mind helped to propel his family’s vaudeville act to success.

Reside’s biography would seamlessly be incorporated into my CLIO entry over Cohan. Reside’s opening paragraph directly references my central aforementioned question about the statue. A very useful segment of this biography is where Reside analyzes the evolution of Cohan’s musical works. He recognizes distinct stylistic shifts from decade to decade and does his best to decipher their meaning.

In a sea of scholarly biographies, a list of “unknown fun-facts” comes as a bit of relief. Antonella Nicholas veers from the expected and provides a list of facts about Cohan that might not normally appear within the traditional biography. While she does her fair share of referencing his prolific career, she also disperses some fun tidbits of golden information. Did you know that Cohan’s family disputes the date of birth listed on his birth certificate? Neither did I.

When analyzing a person who has had such a lasting impact on a field that one feels very passionate about, it is easy to forget that they were in fact, a human person just like the rest of us. Cohan has been idolized to a point where he doesn’t even seem like a real person, similar to many celebrities today. Reading these cute facts about Cohan, particularly the ones that departed from theatre, helped to humanize him a bit, and remind the reader that he too had a life and a family, in addition to his achievements.