Construction on the Corliss-Carrington House began in 1810 and was initiated by local businessman John Corliss. Prior to its completion, it was sold to wealthy merchant/diplomat, Edward Carrington in 1812. Carrington completed the large Adamesque-Federal style townhouse the same year. It remained in the Carrington family until 1936 when it was donated to the Rhode Island School of Design. It was then sold to a private owner in 1961 and was purchased by Providence mayoral candidate, Lorne Adrian, at the end of 2019 for $4.6 million. As of this writing, Adrian uses the property as his personal residence and as headquarters for his Global Fellows in Courage organization. The house has been a National Historic Landmark since 1970.

The Corliss-Carrington House sold for $4.6 million in December of 2019. 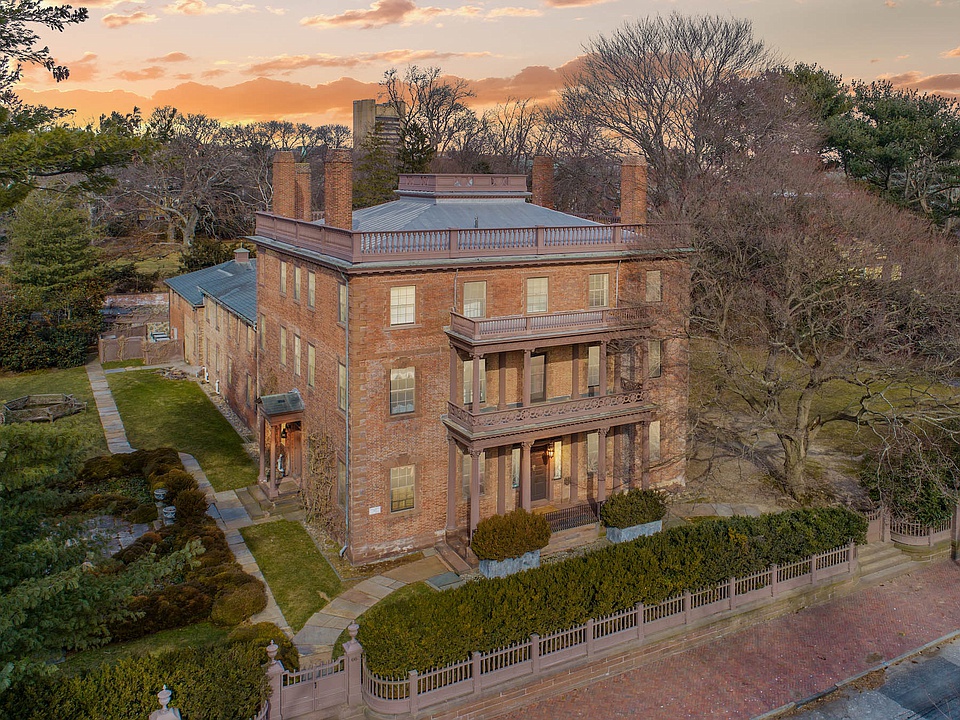 The rear courtyard and ell that was added in 1815. 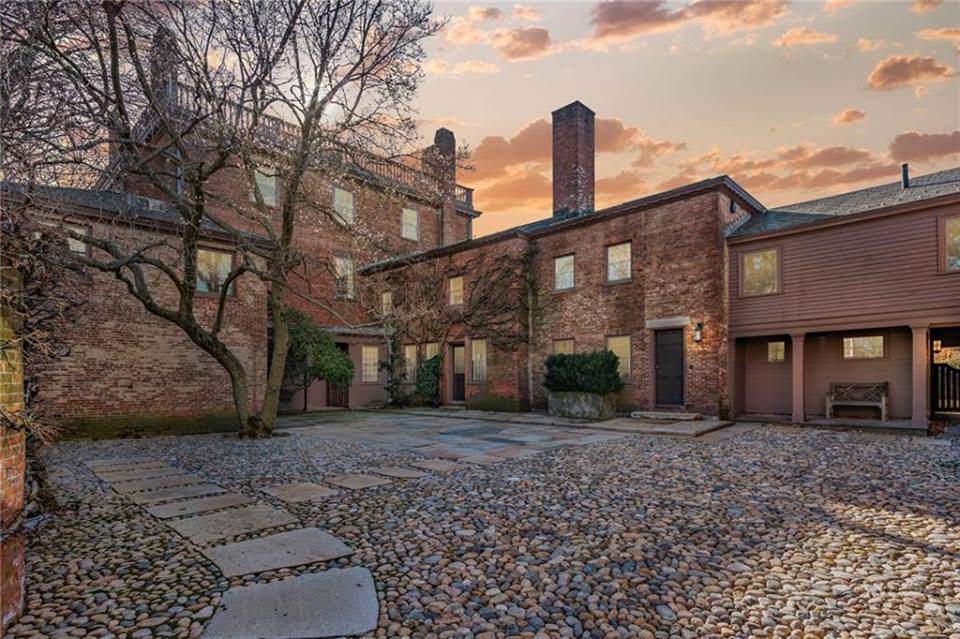 The home's central hallway and spiral staircase to the second floor. 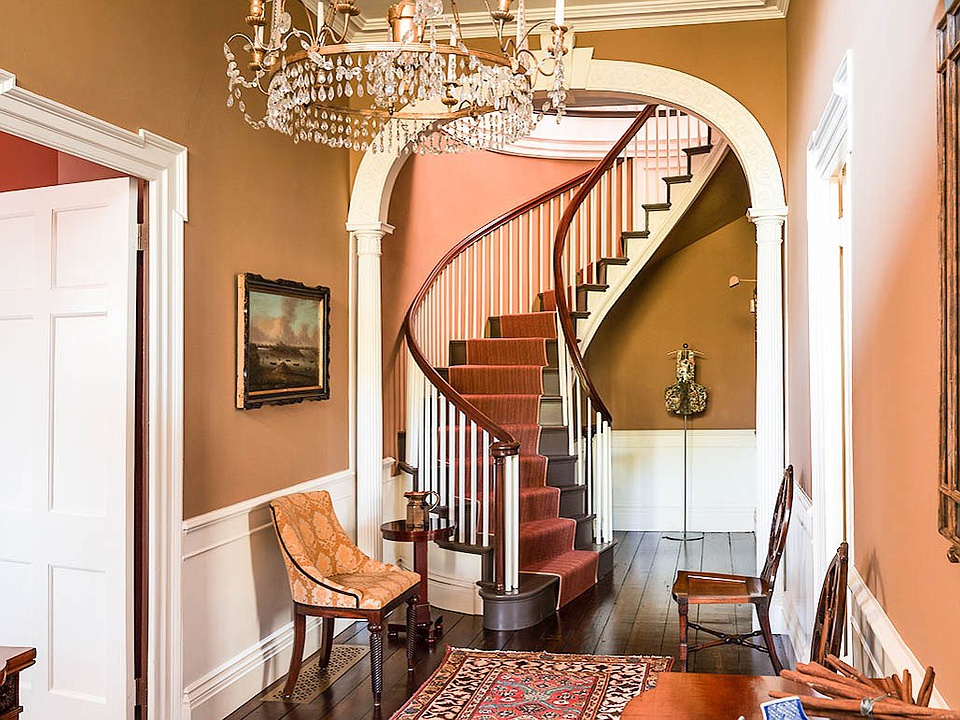 The first floor parlor that features Chinese "peacock" wallpaper installed by Edward Carrington, whose portrait hangs over the mantel to the right. 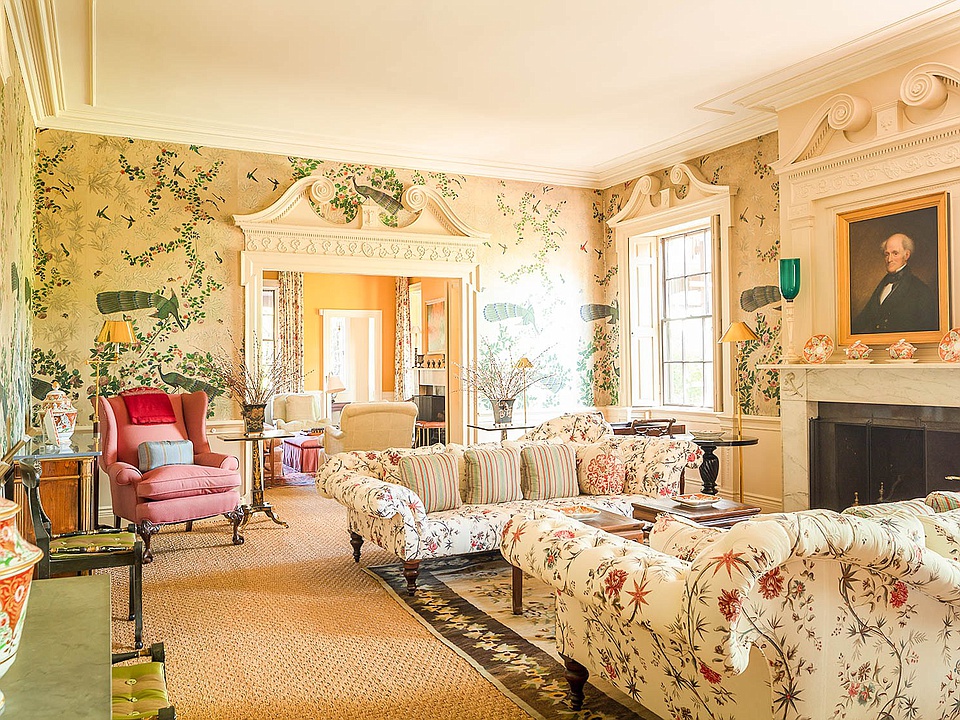 The Corliss-Carrington House as it looked in 1958. 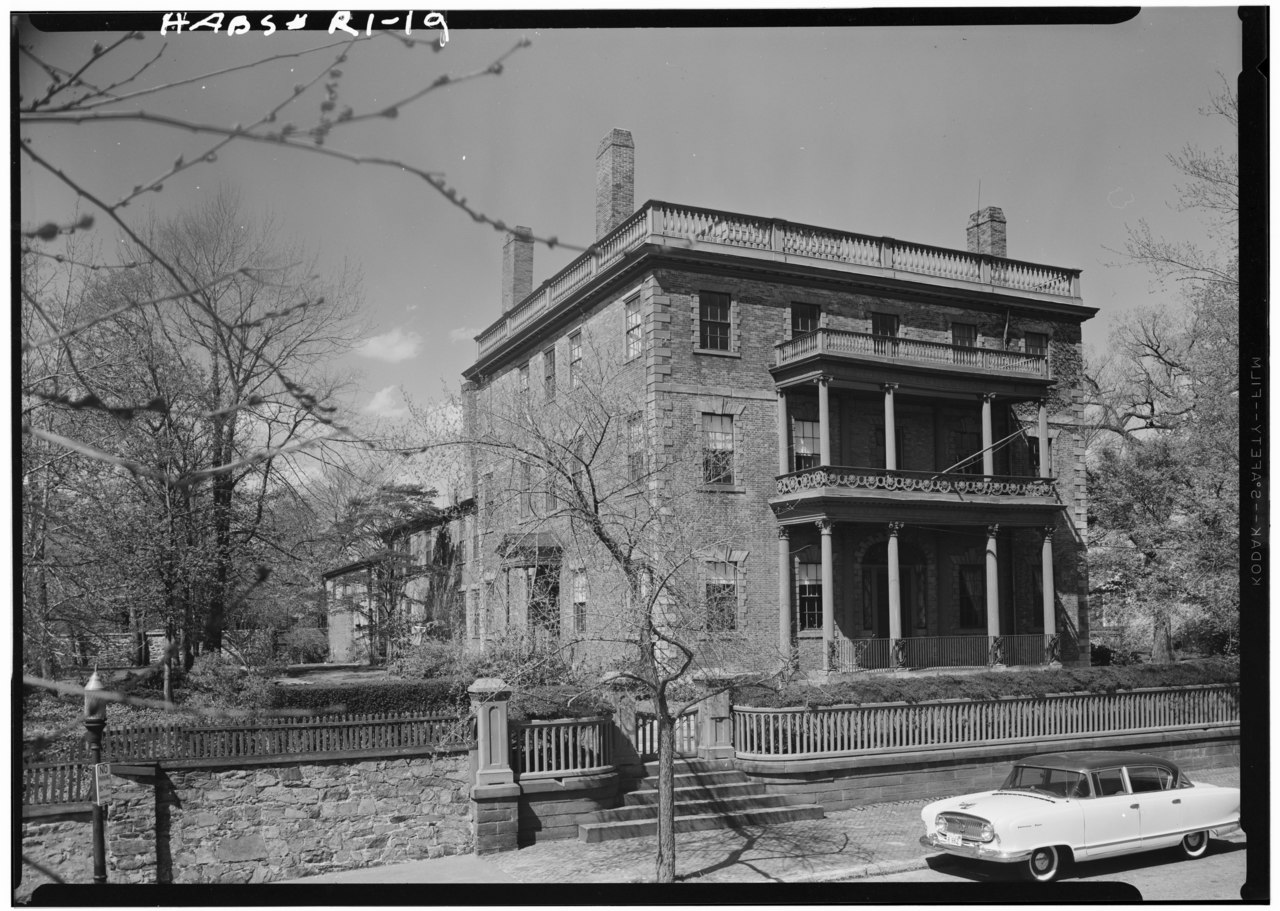 In 1810, businessman John Corliss sought to build a home befitting his status and it was well on its way to completion when his financial situation changed. In order to improve that financial situation he sold his unfinished home to Edward Carrington in 1812. Carrington, who had greatly improved his own financial situation when he married Loriana Hoppin, the daughter of a shipping magnate, had just returned from Canton, China. While in China, Carrington served as U.S. consul and as an agent for American merchants since 1802. When he purchased his new home, he promptly added a third floor and a unique two-story front porch with Corinthian and Ionic capitals of wood.

Carrington’s newly completed home was built with grey-brown brick with a Flemish bond and was trimmed with brownstone. It was covered by a balustraded and hipped roof and parapeted roof deck. Chimneys were built at either end. Inside, its full-length central hallway was dominated by a spiral staircase and its parlors featured French and Chinese peacock wallpaper, in deference to the Carrington family crest which also showcased a peacock. Those parlors have also served as a library and dining room at various times. Carrington worked in a two-story office and had his pick of two master suites, which were on the home’s second and third floors along with four other bedrooms, dressing and storage rooms.

In 1815, Carrington added a two-story ell to the rear of the house. Stables and a barn were also added to the property at a later date and they partially enclose a central courtyard at the back of the house. The property housed three generations of Carringtons until it was donated to the Rhode Island School of Design in 1936. The school utilized the property as a museum house until 1961 when it was sold to a private owner. In 1995, it was purchased by the publisher of the Providence Journal, Stephen Hamblett, as a surprise birthday present for his wife, Jocelin. Mr. Hamblett died in 2005 and the property was maintained by his widow until it was sold to Lorne Adrian in late 2019.

When it was sold to Adrian, the home featured manicured gardens and had grown in size to 11,790 square feet with 13 fireplaces, 5 full and four ½ baths and six bedrooms. Its barn has since been converted to an entertaining and catering space, with separate caterer’s kitchen. It also houses a sauna/spa and gym.

Adrian served as Chairman of the Rhode Island Board of Governors for Higher Education, the University of Rhode Island Foundation and the Rhode Island Special Olympics. He also ran for mayor of Providence in 2014. Aside from living in the Corliss-Carrington House, Adrian plans to use the property to house his Global Fellows in Courage, an organization dedicated “To identify people engaged in bold and courageous social change and to help them accelerate their effectiveness and advance their mission wherever in the world it might be.” Adrian will use the property to create a retreat environment to assist those across the globe and in Rhode Island who are involved in positive social change in a collaborative setting. Invitees will participate in month-long sessions while living at the property. The first retreats take place from March through November of 2020.