Located in Lake Mills, Wisconsin, the Aztalan State Park is arguably the most important archaeological discovery in Wisconsin's state history. The park consists of an ancient Native American village. It is believed to have been lived in from 1000-1300 AD. Aztalan became a National Historical Landmark in 1964 and, in 1966, was put in the National Register of Historical Places. The park spans 172 acres that is mostly prairie. Thirty-eight acres are located in oak woods. Fishing, canoeing, and boating are offered at the park. Some believe the site to be haunted.

The larger of the two mounds at Aztalan State Park 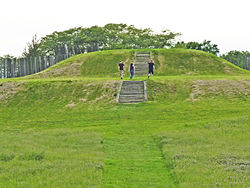 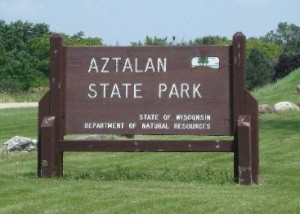 The inhabitants of the village of Aztalan were an ancient Mississippian culture similar to the Cahokia. The nearby Crawfish River was the lifeblood of the settlement. Fishing and irrigation for farming were provided by this river, and hunting was a vital part of life in the settlement as well. Its name comes from settlers who thought the town was related to the Aztecs, but this was not the case. Aztalan is believed to have at one point consisted of 35 acres. Why this culture made its home in this area, and why they subsequently disappeared, remains a mystery to this day.

The village of Aztalan was fenced in by enormous log walls and fortifications made from clay, which suggests there may have been conflicts with neighboring people. Yet these people also found time for artisan trades and leisure time. Discovered at the site were many clay pots, shell beads, ear decorations for nobility, and disks from a game called "chunkey" that revolved around spear throwing. Their houses were made of bark and insulated by clay. There's also a plaza and a temple that once held a sacred fire that were supported by three earthen mounds. Two of these mounds and some sections of the log walls have been restored.