Established on November 12, 1996, the National AIDS Memorial Grove in Golden Gate Park is a 10-acre contemplative space for remembering and honoring all those who have lost their lives to HIV/AIDS. During the late 1980s, amidst the grief experienced by many who recently had lost close friends and family members to the disease, a group of volunteers came together in San Francisco to envision the creation of a memorial in their honor. Also known simply as "The Grove", this site was officially approved in 1996 by Congress and the President of the United States as a federally-designated national memorial through the "National AIDS Memorial Grove Act". This act also recognized the Grove as the first AIDS memorial in the nation. 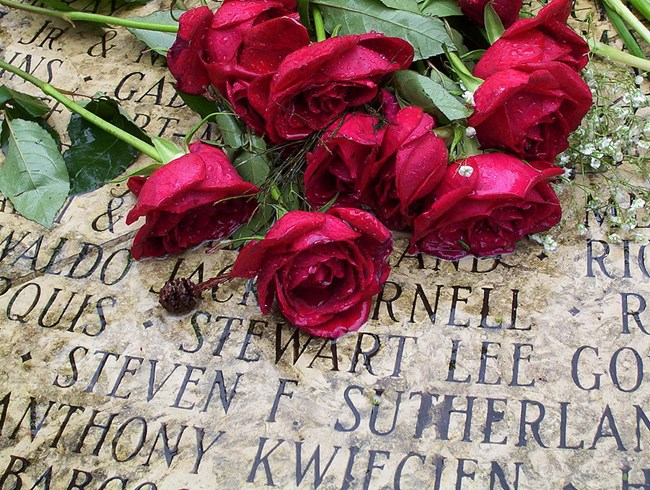 National AIDS Memorial Grove marker, a signature boulder that is located near the entrance to the site 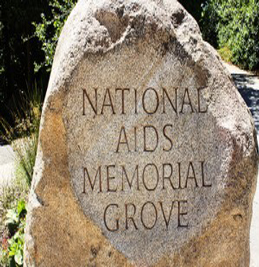 "Circle of Friends" marker, inscribed with names of those who died from AIDS, along with the names of friends, family, and supporters 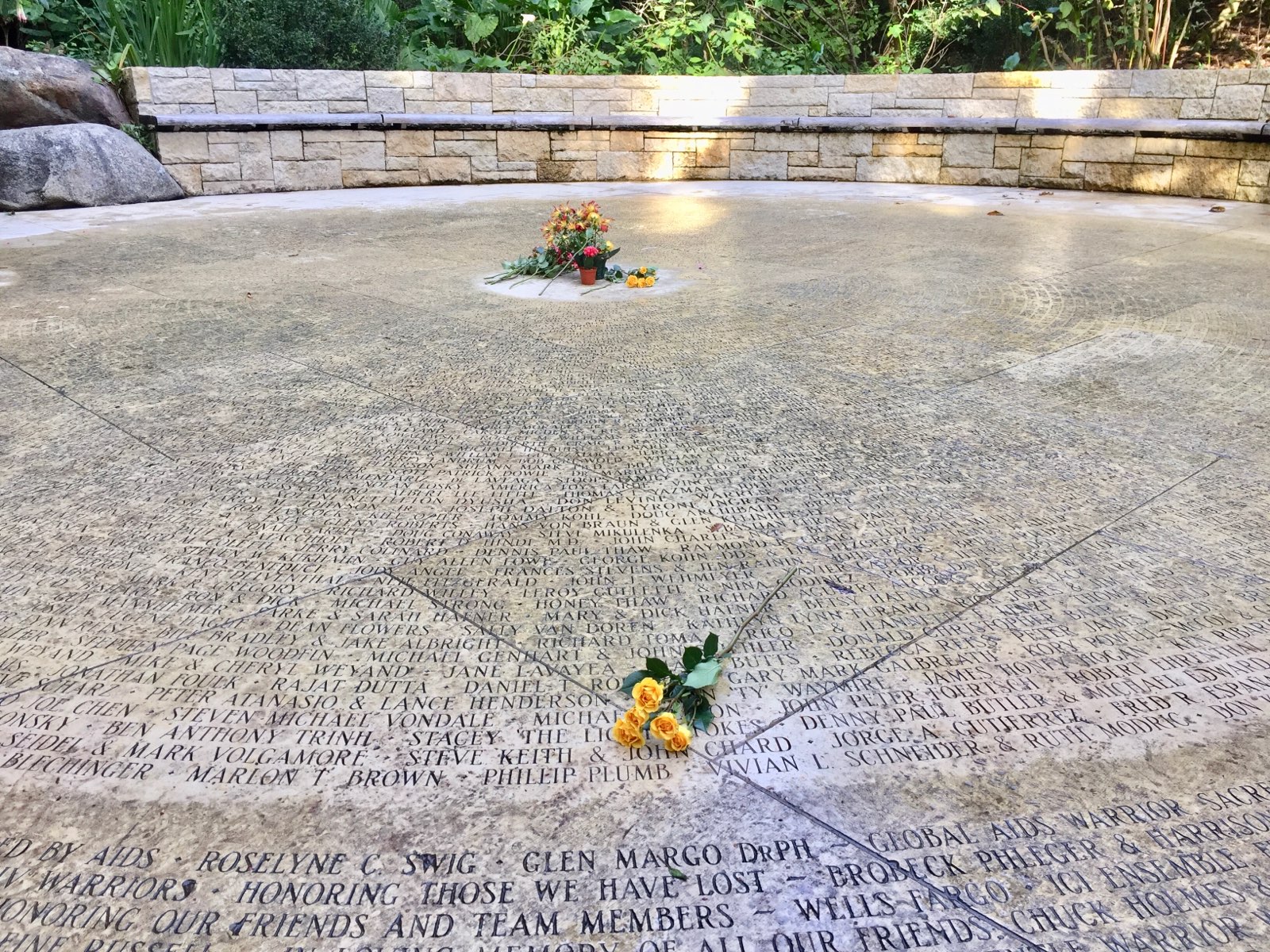 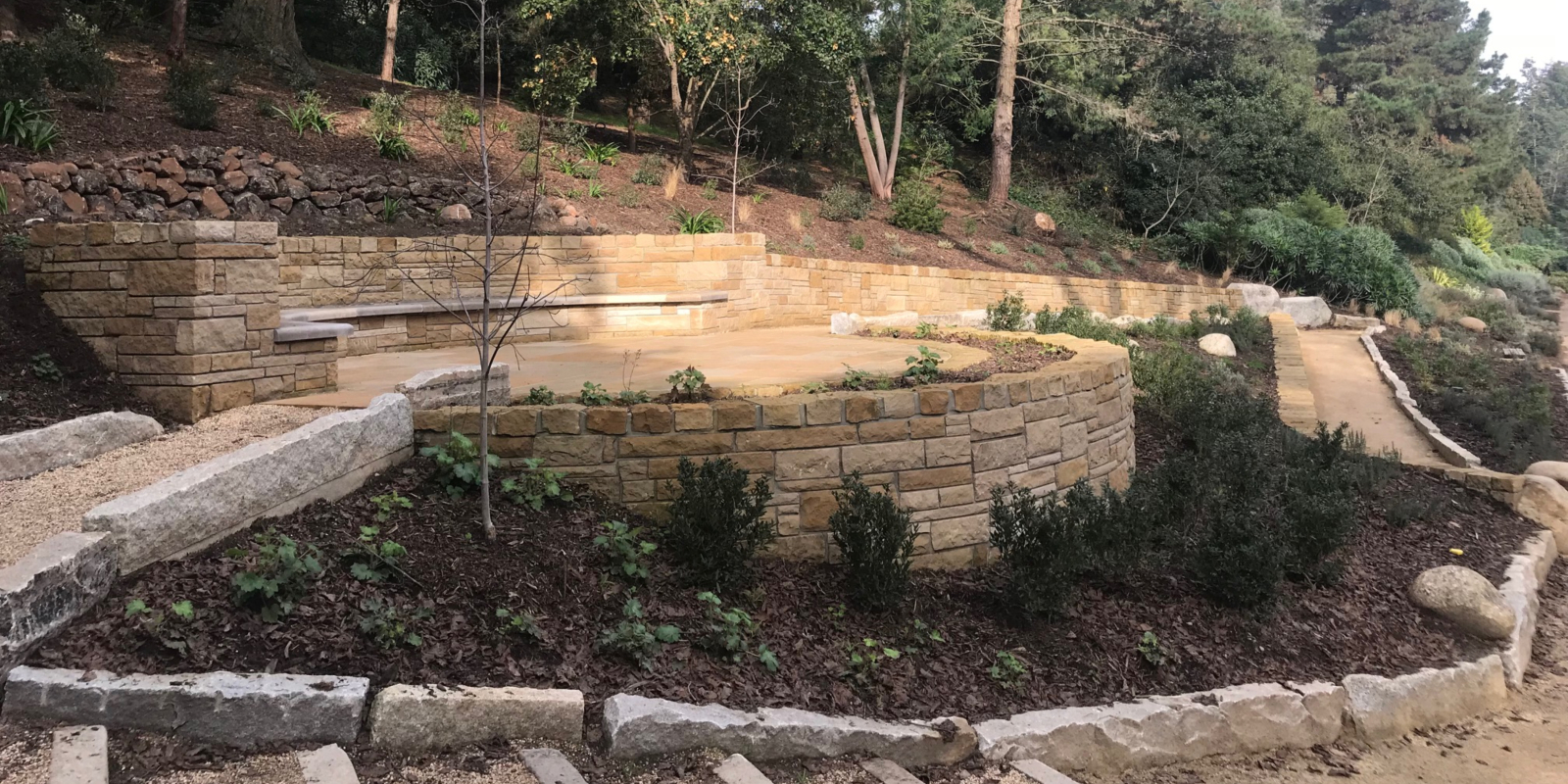 The Artists Portal in the National AIDS Memorial Grove, dedicated by the San Francisco Gay Men's Chorus on December 1, 2018, the 25th Anniversary of World AIDS Day 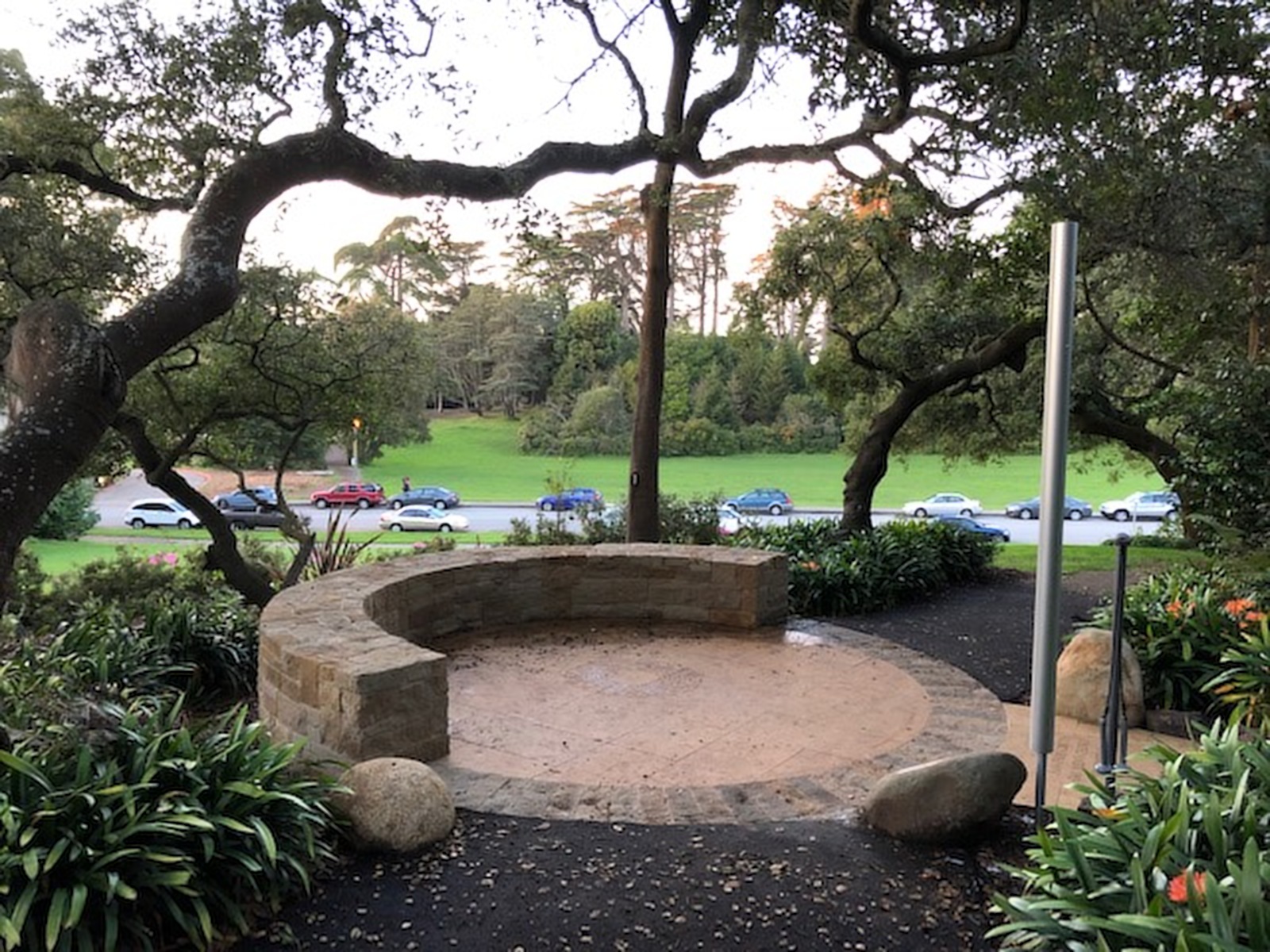 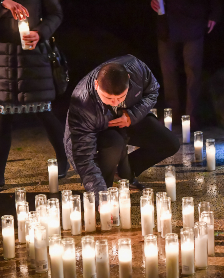 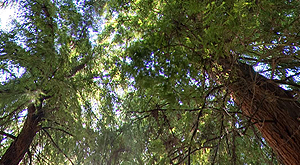 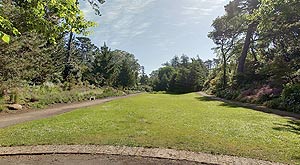 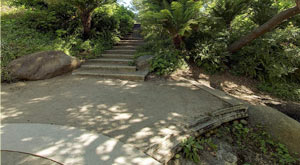 The initial idea for the National AIDS Memorial Grove began in the late 1980s among a group of family members, friends, and supporters who had lost loved ones to AIDS. Their vision was to create a peaceful space for honoring and remembering all those who were suffering from or had died from the disease in San Francisco and around the world. They also sought to provide a national memorial that would encourage greater reflection and understanding, while hoping for a way forward against a global disease for which there is currently still no cure. Together, hundreds of volunteers gathered in September 1991 to begin clearing brush from 10-acres of overgrown landscape to create a space for the memorial, while landscape architects and designers soon began to create an overall plan for the site. The National AIDS Memorial Grove was federally-recognized as a national memorial in 1996, shortly after the celebration of World AIDS Day held on December 1, 1995.

Upon entering the Grove, a seven-ton Sierra granite boulder inscribed with the name of the site appears near the entrance. Once inside the Grove, a woodland path and a wheelchair-accessible ramp leads towards a stand of trees. These include Monterey Cypresses, Monterey Pines, and California Redwoods, located in the eastern part of the Grove. A bridge connects the Woodland Path with the Dogwood Crescent, a curved row of flowering trees that rests beside a flagstone marker called the "Circle of Friends". This special marker contains many names of those lost to AIDS, along with the names of friends, family, and supporters. Over 2,500 names appear together in a circular inscription carved into the flagstone marker. Each autumn, more entries are added to the Circle of Friends, although the newly added names are now inscribed within the adjacent sidewalk. This need for additional space for names attests to the continued reality of a heartbreaking disease. The Circle of Friends marker is also inscribed with the following quote:

"Circle of Friends: Lives Touched by AIDS... Donors to the Grove... Those Who Have Died... Those Who Loved Them"

In another part of the Grove, a Meadow contains a "Crossroads Circle" marker near its western edge. This marker was dedicated especially to women and children affected by AIDS. Volunteers also worked together to create a small dry creek bed, which contains a woodland stream. A bench for rest and contemplation is provided underneath the trees by the Woodland Stream. This area is surrounded by the Redwood Grove, bordered by ten boulders which mark the boundaries of this part of the Grove. One of the boulders has been named "Angel Rock," in honor of the Angels of the Grove. Each of the ten boulders is inscribed with meaningful dedications and remembrances.

The West End of the Grove contains the Meadow Overlook and the Fern Grotto, which contains the Circle of Peace. The presence of this marker attests to the scope of the AIDS pandemic in the 1980s and the continued tragedy of AIDS around the globe. The Circle of Peace marker is inscribed with a poem written in 1996 by Thomas Gunn and it is dedicated to "all of the unidentified individuals who fell victim to AIDS." Throughout the Grove, this marker and many circular shapes can be found. These circles are meant to symbolize and evoke the power of an inclusive and healing embrace.

In 2017, a new Artists Portal was added to the Grove, tucked among a stand of tall oak trees. This semi-circular space looks out upon the de Young Museum and the California Academy of Sciences. First conceived by Dr. Tim Seelig in 2011, it was dedicated on December 1, 2018, by the San Francisco Gay Men's Chorus, which also performed on the same date for the 25th Anniversary of World AIDS Day. The Artists Portal honors the many creative, talented, and artistic souls within the gay community in San Francisco and elsewhere who have died from AIDS. True to Dr. Seeling's original vision, this otherwise quiet space also introduces the quality of sound to the Grove. An eight-foot Emperor Chime waits silently in this space until a visitor decides to ring it in memory of those lost to AIDS.

Also in 2017, a new Hemophilia Memorial was added to the Grove. This memorial features a semi-circular stone wall and flagstone crescent nestled into the landscape. The Hemophilia Memorial contains the names of 200 people who died from AIDS after contracting HIV through contaminated blood transfusions, unknowingly administered to treat hemophilia, a disease which makes blood unable to clot. This marker includes the names of friends, family, supporters, and leaders who dedicated themselves to ensuring that the nation's blood supply became safe following the deaths of 90% of those with severe hemophilia due to contracting HIV/AIDS. A year-end engraving ceremony is held each autumn for adding new names to this memorial marker.

Today, the Grove continues to be tended by hundreds of dedicated volunteers, friends, and supporters. Community outreach groups, LGBTQ support groups, and others who are committed to caring for this site often meet on weekends to maintain the landscape and plantings. Monthly workdays take place on the third Saturday of every month between March and October. Although the Grove is privately funded, it is open to all as a quiet sanctuary and a healing and hopeful place for gathering, picnicking, and spending time in Golden Gate Park.