The Explorers Club was founded in 1904 by “a group of men active in exploration” in order to “unite explorers in the bonds of good fellowship and to promote the work of exploration by every means in its power” (1). The club moved locations several times following its official incorporation (October 15, 1905), ultimately ending up at this Jacobean townhouse in 1965. Today the club hosts events, lectures, and exhibitions, many of which are ticketed events that are open to the public and discounted for members. This historic space may also be rented out for certain events. 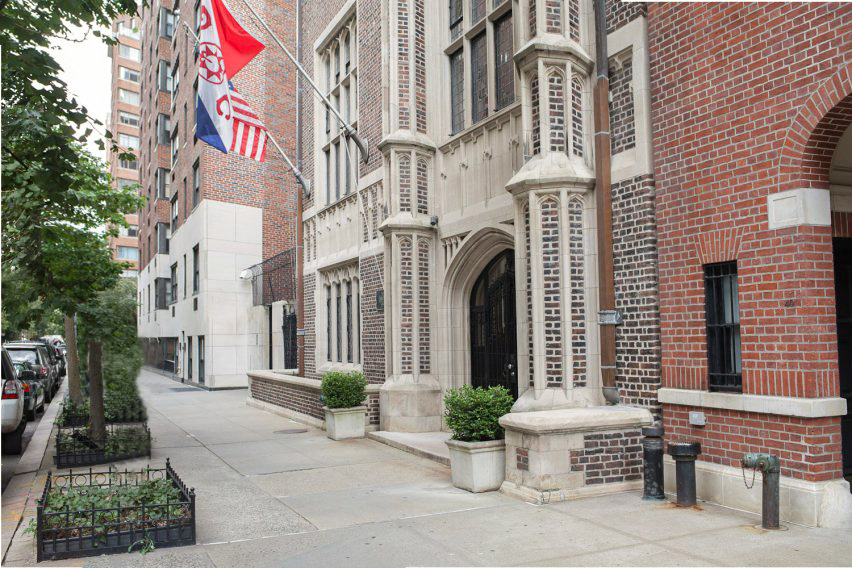 In 1910, Stephen Clark constructed this townhouse for himself and his family at a cost of $650,000. Stephen Clark was the grandson of Edward Clark – head of the Singer Sewing Machine Company and builder of the famous Dakota building on Manhattan’s Upper West Side – and consequently, Clark managed that property as well. Frederick Sterner was hired as the architect for Clark’s Upper East Side mansion, which now houses the Explorers Club. In the days when this property was occupied by the Clark family, the mansion had five floors and, according to the 1920 census, Stephen Clark lived in the home with his wife, three children, and ten servants. Stephen Clark collected many fine artworks in the home, including works by El Greco and Matisse (these works were later donated to the Metropolitan Museum of Art, where Clark was also a trustee). In 1939, Stephen Clark solidified his legacy by establishing the National Baseball Hall of Fame in Cooperstown, New York. (2)

In 1964 the Clark’s sold the mansion to the Explorers Club (2). The club’s headquarters have remained in this location since 1965. After the explorers moved in, they filled the former mansion with a wide collection of historical artifacts and souvenirs from their members’ expeditions. Members of the Explorers Club were “first to the North Pole, first to the South Pole, first to the summit of Mount Everest, first to the deepest point in the ocean, and first to the surface of the moon” (1). The Club houses artifacts such as the Dowager Empress Chair, which purportedly belonged to the last empress of China, Empress Wanrong (3). The club also houses the globe which Thor Heyerdahl used to plan his expedition aboard the Kon-Tiki – seeking to prove the theory that early South American people could have sailed across the ocean to settle the South Pacific islands as far back as 500 A.D. (3).

The Explorers Club has its own flag, which has been an important part of member expeditions since 1918. The flag, “has flown at both poles, from the highest peaks of the greatest mountain ranges, traveled to the depths of the ocean, to the lunar surface, and outer space”. Not every expedition may qualify for a flag – only those which further the cause of exploration and field science may qualify. Today there are 202 numbered flags, each is tracked and photographed along its journey and each has a unique historical account (1). For example, Flag 101 has traveled to the highest point on Earth (the summit of Mt. Everest) and to the deepest spot on Earth (the Mariana Trench) (3).

According to the Explorers Club website, membership is open to individuals, “who carry out or assist in field science expeditions to study unknown or little-known destinations or phenomena in order to gain knowledge for humankind”. Prospective members must be nominated by an existing member. Women were not admitted to the Club until 1981 and the first female members included Sylvia Earle, Dian Fossey, Rita Mathews, Anna Roosevelt, and Kathryn Sullivan (1).

Today the club provides grants for key projects and hosts a variety of events including networking events, lectures, and special film screenings. The Club has approximately 3,500 members representing every continent and operates in more than 60 countries, comprising 32 chapters around the globe (1). The collection of historical items housed in the Explorers Club is often of a specialized nature; however, if an individual wishes to access the collection they may contact the Curator at the address below for general guidance and to make an appointment.