In 1894, the Church of England donated a stone monument, the Prayer Book Cross, for display in the Midwinter International Exposition, a "world's fair" event that was held the same year in San Francisco's Golden Gate Park. Originally, the monument was also known as "Drake's Cross" because it marked the first Anglican church services held by Sir Francis Drake's chaplain in the new world during the sixteenth century. Although some consider the Prayer Book Cross to be a controversial monument, it currently appears mostly hidden from view by the tall trees that have grown up around it. The Prayer Book Cross is situated atop the hill above Rainbow Falls in Golden Gate Park. It is accessible via a short hike up the hill, just north of John F. Kennedy Drive and east of Cross Over Drive. 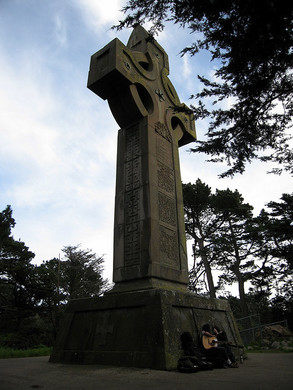 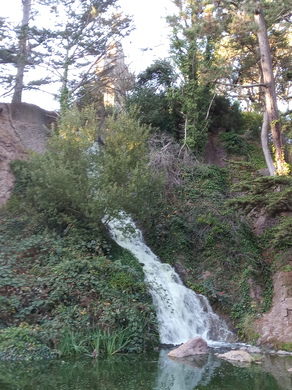 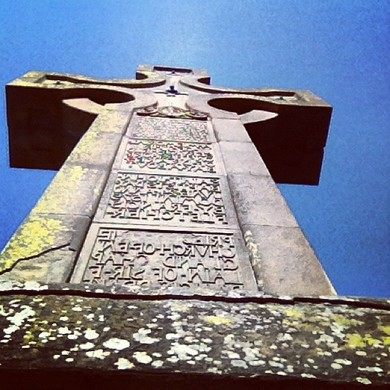 In 1894, the Church of England donated the Prayer Book Cross, a 57-foot Celtic-style cross made of sandstone, marble, and granite, for display in the Midwinter International Exposition. This "world's fair" event was held in San Francisco's Golden Gate Park the same year. It reflected many different cultural heritage traditions from around the world and drew public attention from near and far. Several new monuments, gardens, and structures were erected in Golden Gate Park for this special event.

As noted in the inscription on the Prayer Book Cross, this monument was created to mark the first recorded use of the Book of Common Prayer during a worship service held in the new world. The Book of Common Prayer is the standard book of prayer used by the Church of England (also called the Anglican Church). This religious service was led by Reverend Fletcher, a chaplain who accompanied the sixteenth-century explorer, Sir Francis Drake, on a voyage in the Pacific Ocean in 1579. On this voyage, Drake and his men spent six weeks on the coast of California. It was during this period that the Reverend Fletcher led the first Anglican service in the Americas by reading from the Book of Common Prayer on June 24, 1579, while on the shores of the Pacific coast.

To commemorate the first Anglican church service in the Americas, the Church of England commissioned an architect to design the Prayer Book Cross (also called "Drake's Cross") in 1894. The monument was originally intended to be erected at Point Reyes, California. This was the actual site of the first Anglican prayer service held by Reverend Fletcher for Drake's party in the Americas. However, it was thought that this remote coastal location would not allow for sufficient public access to the monument. Thus, it was decided that the cross would instead be placed atop a hill in San Francisco's Golden Gate Park to coincide with the upcoming Midwinter fair in 1894. By placing the monument on a hill in the park, rather than amidst the busy architectural cityscape of San Francisco, it was also thought that the monument would more easily be seen from miles away, especially from the sea by ships entering the harbor.

The Prayer Book Cross monument was designed by Ernest Coxhead, an architect born in Sussex, England, who spent much of his career working in San Francisco. Many of Coxhead's architectural designs became associated with a style known as "Bay Area Traditional." Since Coxhead was an Englishman and well-regarded as an architect in California, he was selected by the Church of England to create the new monument. He designed the 57-foot tall Celtic-style sandstone cross to sit atop a 7-foot marble base, making the structure 64-feet in overall height. The Prayer Book Cross is still the tallest monument in Golden Gate Park.

In recent years, some questions have been raised regarding the constitutionality of the monument. However, it remains in its original location to this day, a site of quiet contemplation in Golden Gate Park. Despite being situated atop the hill above Rainbow Falls, the monument is now largely obscured from view by the tall trees that surround it.