Nimmo United Methodist church is the oldest surviving Methodist Church in continuous use in Virginia. Standing since George Washington was the President of the United States, Nimmo has endured through 200 years of history, acting as a vital place of worship for many. Most notably, it served as both a lodge and a hospital for Federal troops during the American Civil War. 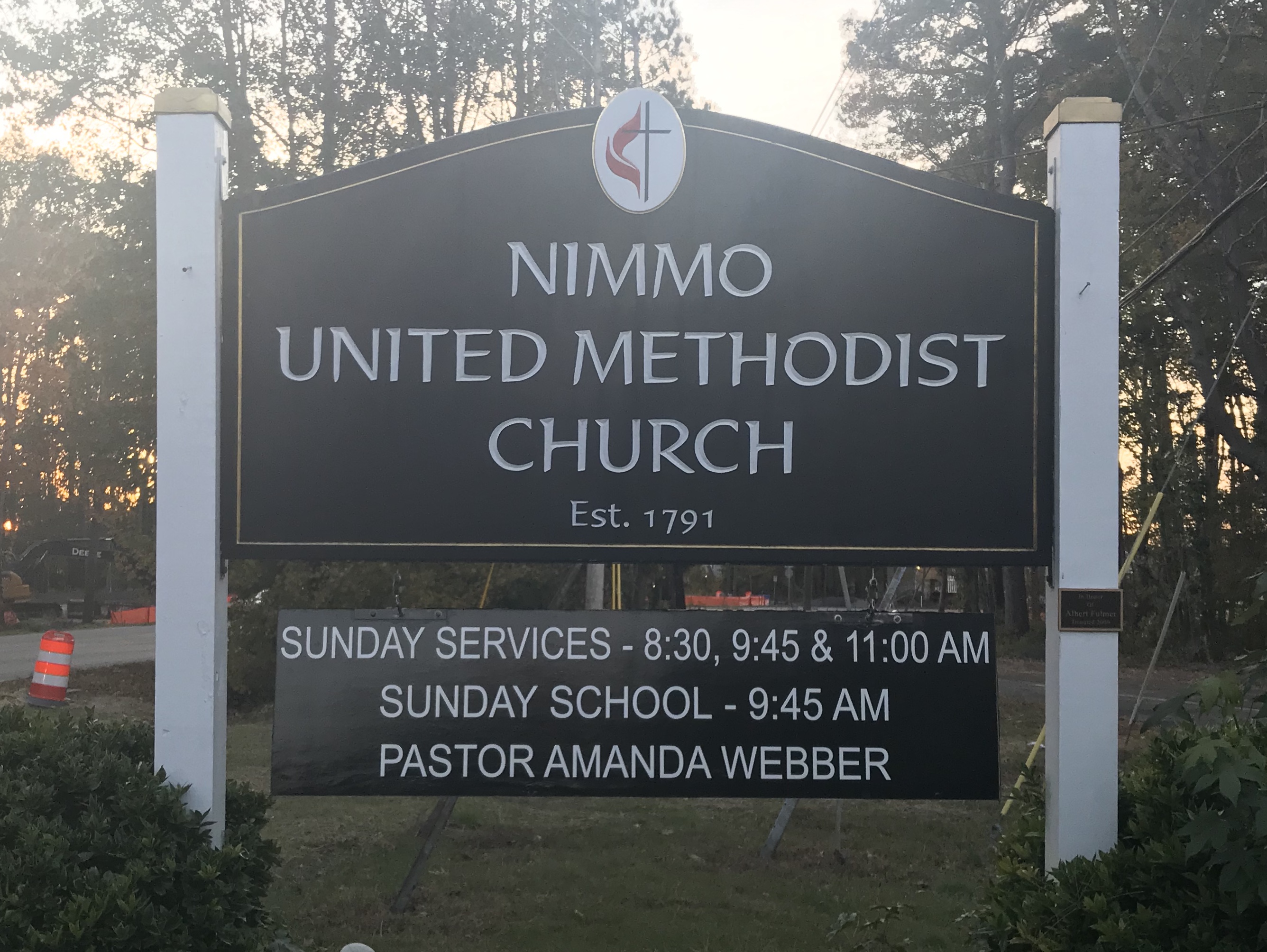 On March 30, 1791, Anne Nimmo conveyed one acre of land to the Society of Members of The Methodist Episcopal Church, where work immediately began on the “Nimmo Meeting House.” Since this date, Nimmo United Methodist Church has endured and evolved through hundreds of years of history. The initial building was simple; it was a rectangular single-story structure made of white clapboard siding and plastered walls. On the inside were rows of Colonial pews featuring high backs and stained pine and poplar, edged with walnut. It had a brick fireplaces on each side of the building and pine and carpet flooring. This design aligned with the Methodist discipline that churches should be no fancier than what is necessary. The original structure still serves as the church’s sanctuary, making it the oldest surviving Methodist Church in continuous use in Virginia.

Many years later in 1829, a group from Nimmo acquired land across from the existing church to construct Olive Branch Methodist Church, which later reunited with Nimmo. In 1894, the Trustees conveyed this church along with its property to the Trustees of Nimmo. In 1872, the Trustees began reporting that the church was in need of repairs, as it had already endured for over 80 years. Over the next hundred years, extensive renovations were done to restore and expand Nimmo church into the building it is today. By 1876 they had repainted the inside and outside walls, re-varnished the seats, constructed a new pulpit, and installed new carpets and cushions. Then, in 1893 and 1894, a recessed chancel was added to the east end, a steeple and vestibule was annexed to the west end, and the ceiling was raised. A new hardwood floor was laid over the time, theater-style seating was installed, and their baptismal font was donated by Miss Evelyn Nimmo in 1927.

Wings were added to either side of the church connected to the sanctuary with arched breezeways to accomodate for Sunday Schools in 1957. Eight years later, the current colonial box pews were added and the original pine floors were uncovered and refinished. The building was also re-plastered and the balcony was restored in the same year. In 1989 the breezeways were enclosed and offices were added and most recently, the social hall was completed in 1991, finishing the building’s renovations.

Nimmo was first established during George Washington’s presidency, and has stood through the brightest and darkest moments in American history. In 1840, the church's balcony was constructed to act as a slave gallery, and it is now the only remaining structure in the city directly related to slavery. Also during this time, women sat on one side of the church and men on the other; this continued into the 1950s. In addition to the building enduring through times of slavery, it also lived and served through the Civil War. Near the beginning of the war, this area came under Federal control, and Nimmo both housed troops and was used as a Federal hospital. Carved into the balcony’s posts are the names of the troops and their loved ones, although now covered with molding.

The cemetery is also a historically rich part of Princess Anne Country, established in 1910 with the burial of Laura Murden. Numerous older graves were relocated here, so one can expect to find previous owners of land in Ocean Lakes, Upton Forest, Red Mill Farms, and Courthouse Forest. Nimmo United Methodist Church provides a glimpse into the history of Virginia Beach and the city’s role in the history of the country. It’s lifespan of over two centuries is undeniably impressive, and it’s extensive historical background makes it an integral historical landmark worth seeing.