Designed by Chicago architecture firm Weary & Alford, the Sioux Falls National Bank Building is significant for its architecture and its role in the city's economic development in the early 20th century. Listed on the National Register of Historic Places, it was built in 1918 and is the only example of the Sullivanesque architectural style left in Sioux Falls. It was also the tallest building in the city until 1986 when the CenturyLink Tower was erected. Today, the former bank building is an upscale hotel called Hotel Phillips.

Sioux Falls National Bank Building was built in 1918 and was the tallest structure in the city until 1986. 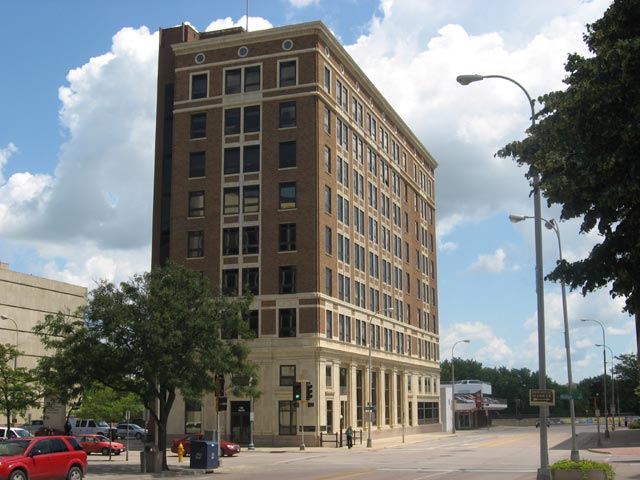 In 1916, officers of the Sioux Falls National Bank decided to construct the building in the downtown business district. They not only wanted the building to house the bank, they also wanted to provide office space for the growing number of other professionals in the city. Demand was so high that even before it construction was completed (in June 1918), more than 96% of the office space was leased. When it opened, around 10,000 people came to admire the new building. The new tenants of the building included doctors, dentists, lawyers, and insurance companies. The need for additional space became clear as the 1920s progressed and an addition was built in 1929.

The building remained an important office building for three decades. However, by the 1960s it was clear that it needed an updated and renovated. Fortunately, in 1976 Great Western Bank decide to buy it so they could relocate to downtown. The bank moved in after renovations were completed. The building became Hotel Phillips in 2018. It still retains some original features including original chandeliers, the original bank vault, and the original terazzo floor in the lounge.