Architecturally, First Congregational Church is considered one of the best examples of the Richardsonian Romanesque style in South Dakota. Built in 1907 with quartzite stone, the church features three towers of unequal height (two are located on the front facade and the third is at rear of the building), semi-circular arches, stained glass windows, and other notable decorative details.

First Congregational Church was built in 1907 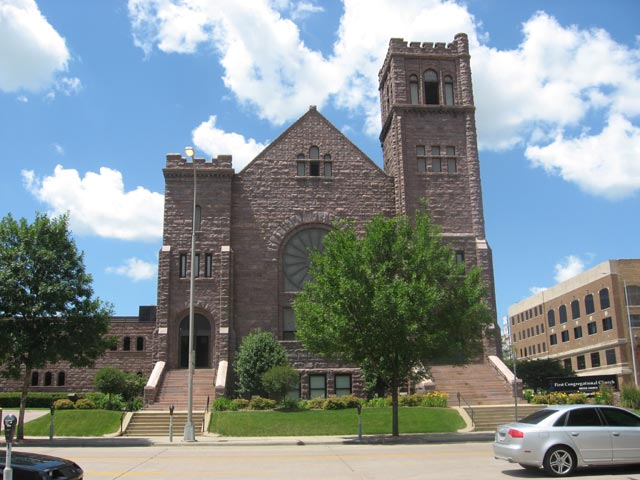 The congregation itself was founded around 1871 and built its first church, a small wood-frame structure called "God's Barn," in 1879. Before that, the congregation met in a barracks building. The current church was designed by local architect Joseph Schwarz, who also designed other buildings in the city including the former Carnegie Library. The church is a member of the United Church of Christ, which was established in 1957 to join Congregational, Christian, Evangelical, and Reformed denominations. Given its architecture and significance as an important local landmark, the church was added to the National Register of Historic Places in 1983.

"We are a congregation of the United Church of Christ." First Congregational Church. Accessed January 9, 2020. https://www.firstcongucc.com/ucc.