Taken from her home in Wilkes-Barre, Pennsylvania, by Delaware Indians as a young child, Frances Slocum took the name Maconaquah and assimilated into Native American culture in Indiana. Decades after her capture, her biological family found her with Miami Indians in Indiana, but Maconaquah chose to stay with her new family. She married a man who would become a Miami chief, Shepacanah, whom she had four children with, though only two daughters survived. When the United States government drafted a treaty that forced Native Americans from their home along the Wabash River in 1840, Maconaquah and her brothers appealed the government to allow her family to reside on a reservation in Indiana. Maconaquah stayed in Indiana until her death in 1847, where she was buried near her village. Her grave was moved to Frances Slocum Cemetery in 1965. Whether remembered as Frances Slocum or Maconaquah, the girl who was captured as a child continues to have a profound place in the memory of communities in both Indiana and Pennsylvania. 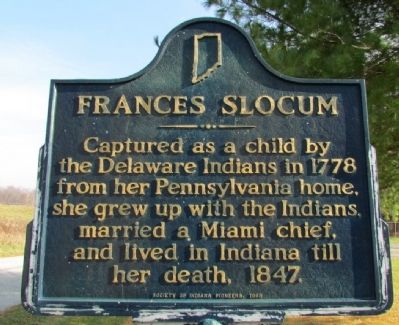 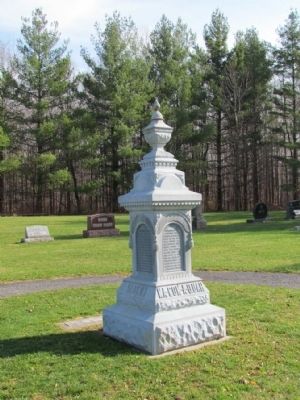 Drawing of Frances Slocum's capture at her home in Wilkes-Barre, Pennsylvania. 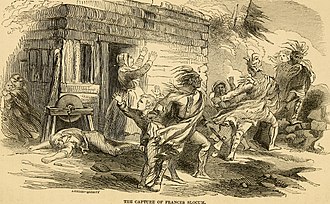 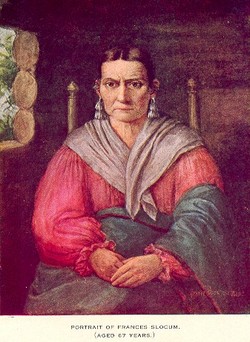 Frances Slocum with her two daughters. 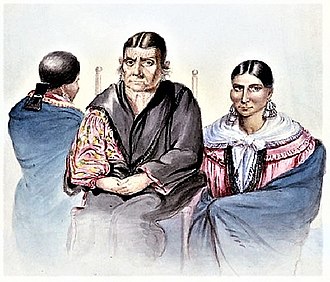 Frances Slocum was born in Warwick, Rhode Island to Jonathan and Ruth Tripp Slocum in 1773. Her family was living in Wilkes-Barre, Pennsylvania, when she was taken from her father's house by Delaware Indians in 1778. She was five years old. A biography about Frances Slocum recounted her abduction:

"[...] he [a Native American] instantly seized little Frances, and throwing her over his shoulder his shoulder, rushed after his companions. Mrs. Slocum begged piteously for her daughter, but in vain. The child stretched out one hand imploringly towards her mother, while with the other she brushed away the luxuriant auburn ringlets which fell over her face, and as the tears streamed from her eyes she frantically called on her mother to save her. The Indian dashed into the brushes, and that was the last Mrs. Slocum ever saw of her child!"1

Slocum was given the name Maconaquah (Ma-Con-a-Quah), which means "Little Bear" or "Young Bear," and raised in Native American culture. She married Little Turtle in 1790. One source states that he was a Miami chief but another states that this was not the Miami's chief Little Turtle. Maconaquah, however, divorced him because of domestic abuse and moved back with her foster parents. She remarried Shepaconah (She-Pan-Can-Ah), also known as Deaf Man, who later became the Miami's chief. Maconaquah had two daughters with Shepacanah: Kekesequah and Osawsheguah. She also had two sons who died at young ages.

Maconaquah's biological family continued to look for her with no luck; in 1835, however, a fur trader named Colonel George W. Ewing passed through her Native American village and heard of the story of her abduction. When Ewing returned east, he located her family, who went to visit Maconaquah in 1838. Her family wanted her to return to Pennsylvania, but Maconaquah did not want to leave her Native American family after 60 years. Maconaquah did not leave and continued to live with her family until she died of pneumonia on March 9, 1847 at 74 years old. She was originally buried near her second husband's village, but the graves were moved to the Frances Slocum Cemetery in 1965. Construction of the Mississinewa River Dam threatened to flood the location of Shepancanah's village.

Slocum was significant because she was a white woman who lived with Native Americans. Frances was, however, not subject to the Trail of Tears thanks to her brothers. In 1840, the United States government made a treaty that forced Miami Indians to leave their home on the Wabash River in five years. Maconaquah's brothers helped her appeal to Congress. She and her descendants were allowed to reside on a reservation in Indiana.

1 Meginness, John Franklin. Biography of Frances Slocum, the Lost Sister of Wyoming: A Complete Narrative of Her Captivity and Wanderings Among the Indians. Williamsport , PA. Heller Bros. Printing House, 1891.

Photograph by Duane Hall from the Historical Marker Database.

Photograph by Duane Hill from the Historical Marker Database.