Originally called "Bridge 54," this railroad overpass was conceived as a key visual element in a carefully planned section of Cleveland's parks and boulevards system, and it once served as the entrance to Edgewater Park. Designed by eminent Cleveland architect Charles F. Schweinfurth in 1897, Bridge 54 displays the hallmarks of the grand Romanesque Revival style, which characterizes much of Schweinfurth's work for the City of Cleveland and its most prosperous citizens. Today, Bridge 54's castle-like walls and imposing scale make it an eye-catching structure in the Clifton & West Boulevard historic district.

Shweinfurth's Drawings of Masonry Details North End, Bridge 54 Over West Boulevard. 1897. Schweinfurth was a talented draftsman. He created meticulous drawings for many of his architectural projects. 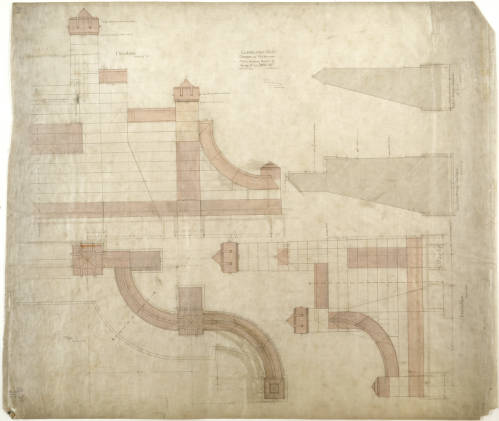 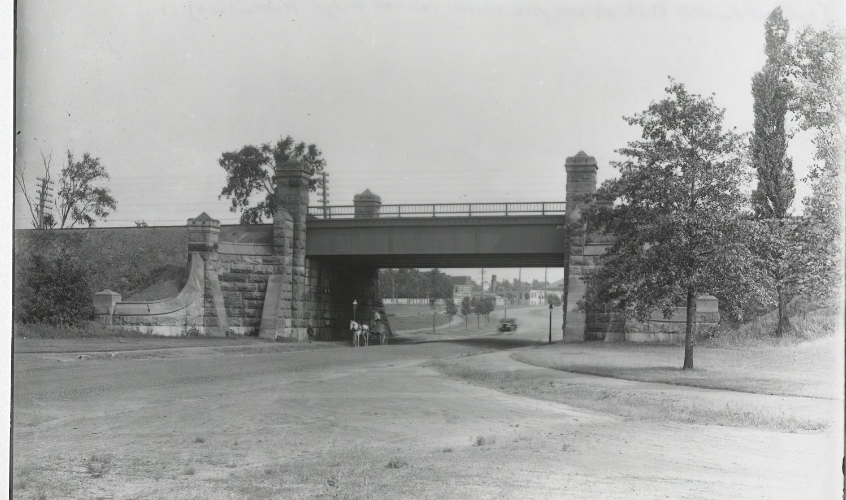 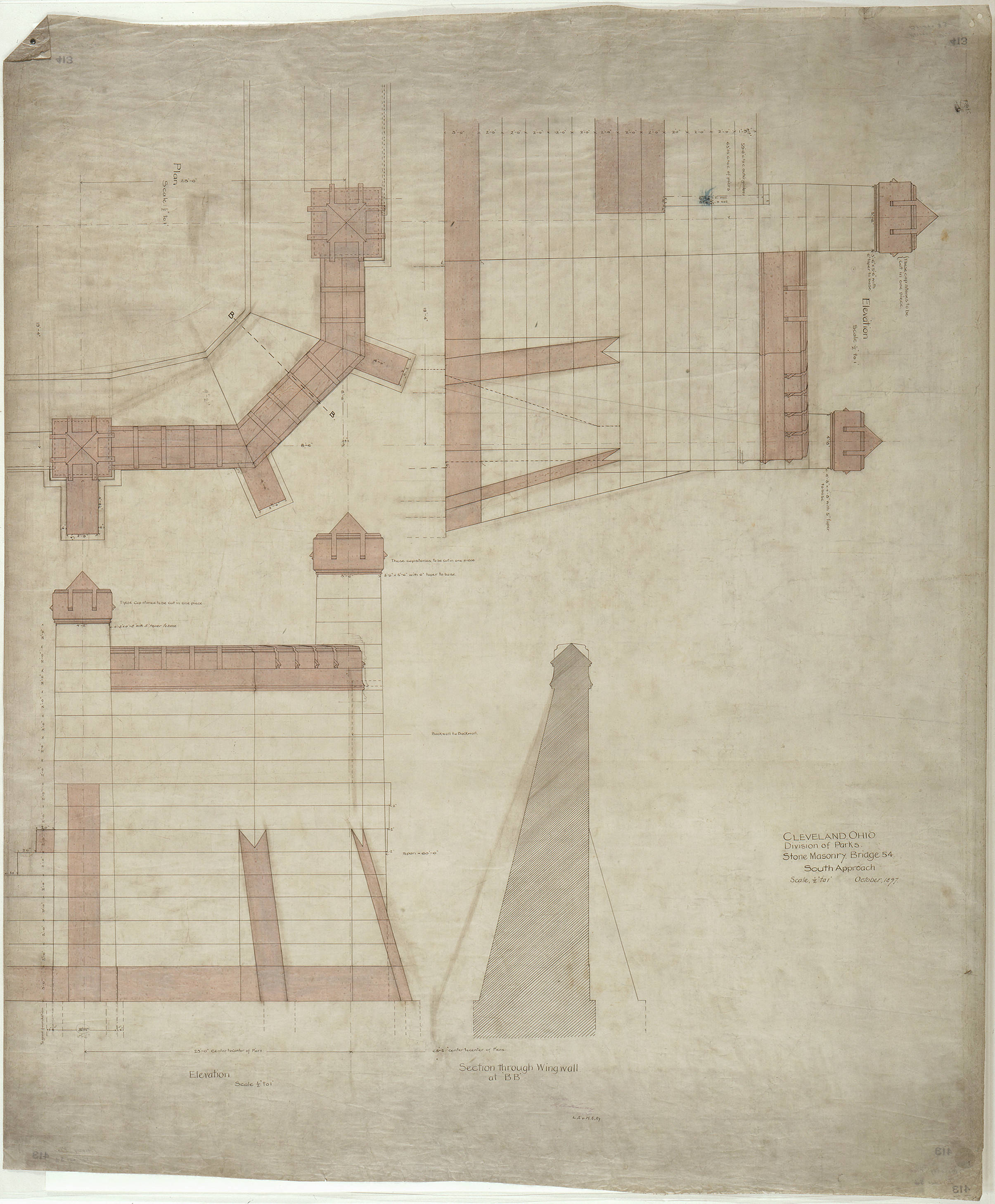 General Scheme for Parks and Parkways, 1890-1910. The bolded lines and areas on this map indicate proposed pathways between major parks around Cleveland. 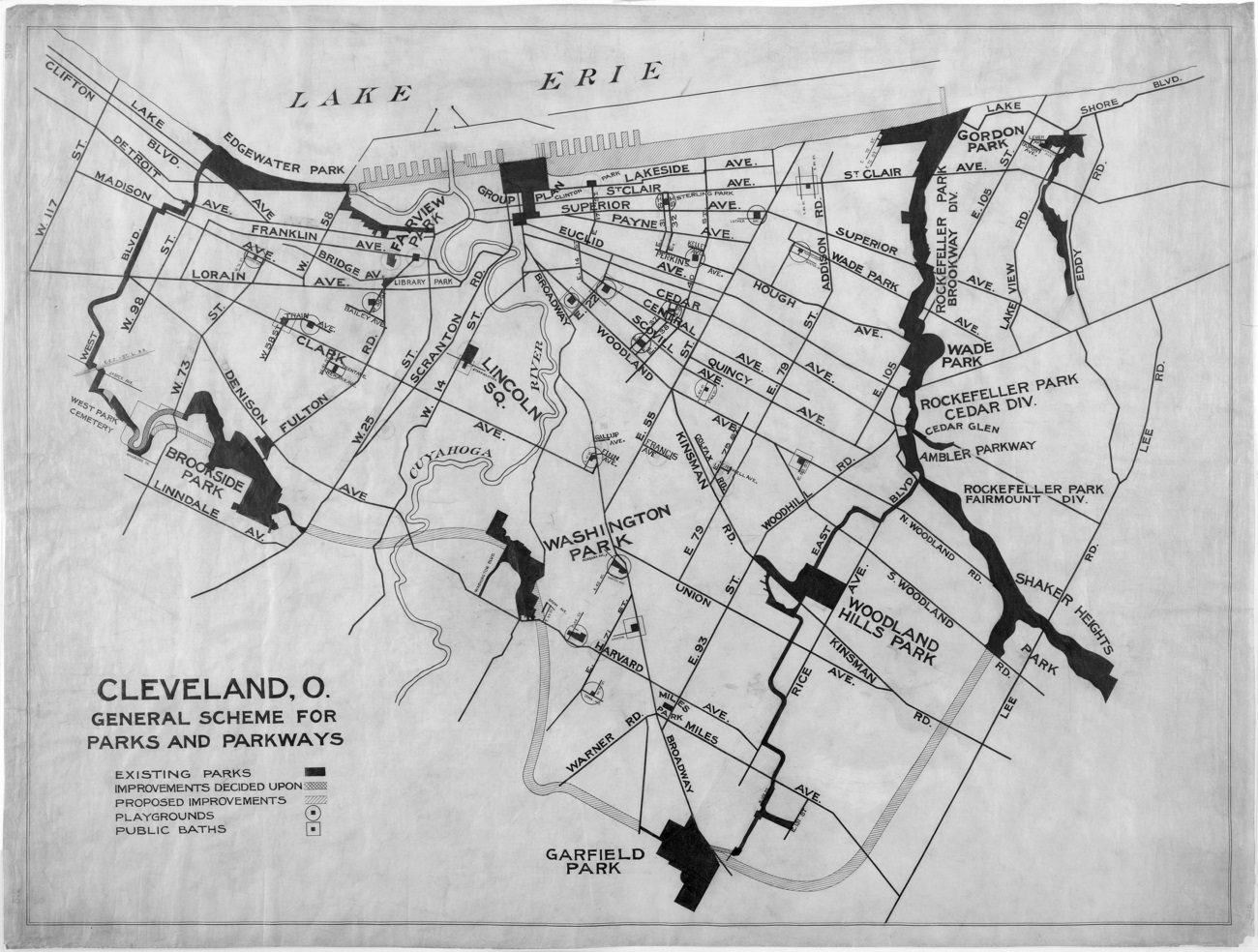 Location of Bridge 54 around the time of its construction in 1898. 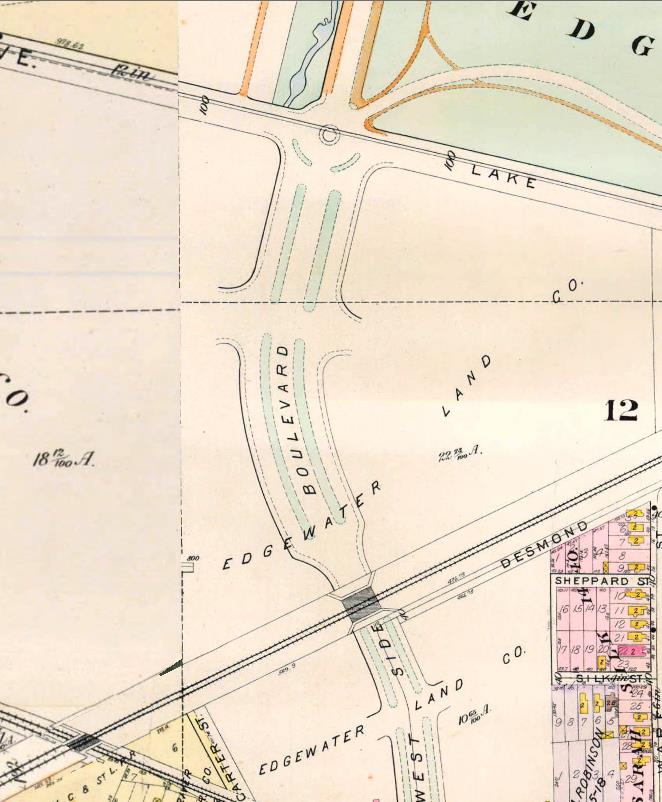 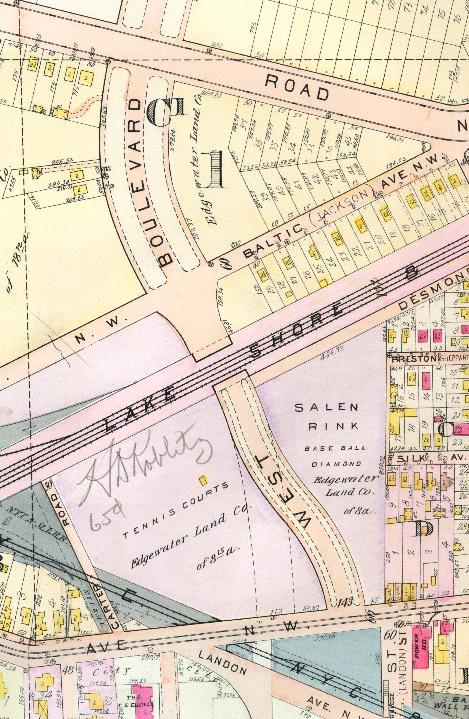 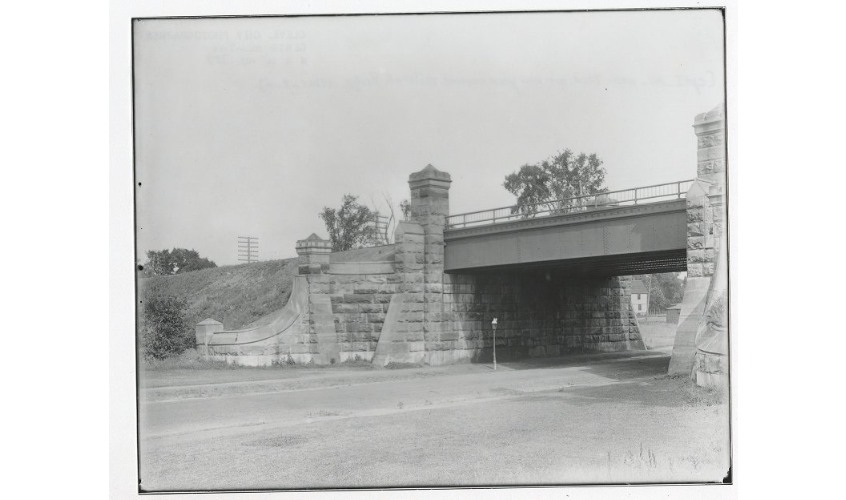 Bridge 54 was one of the original entrances to Cleveland's Edgewater Park. The railroad tracks predate the park and were laid in the 1840s on land owned by Cleveland industrialist, Jacob B. Perkins. Perkins sold this parcel of land and the property he owned on Lake Erie to the City of Cleveland in 1885 with the stipulation the land be used as a park. He suggested the name "Edgewater" rather than "Perkins Park." The Cleveland City Park Commission quickly implemented park infrastructure and made the necessary preparations for an "Edgewater Boulevard" that would run from Edgewater Park, under Bridge 54, and connect to Brookside Park in the south.

Later officially called "West Boulevard," this was one of several thoroughfares intended to connect all of Cleveland's parks around the city. Like many city planners in the late 19th-century, Cleveland's leaders hoped that new green spaces would combat the congestion and grime caused by rapid population growth and industrialization. Cities across the country adopted similar "parks and boulevards" systems as they designed new neighborhoods for the increasing number of urban residents. Even though West Boulevard is close to Cleveland's downtown, all the houses facing the boulevard adhere to deed restrictions that mandate far setbacks and wide tree lawns. This gives a verdant, suburban atmosphere to the street. Cleveland's ambitious plan to connect every park was never fully realized. Industrial infrastructure blocked the path of West Boulevard in the south. However, the unusually spacious and grand character of West Boulevard has continued to distinguish the neighborhood, leading to its designation as a historic district in 2000.

Charles F. Schweinfurth (1856-1919) was a natural choice to design Bridge 54, and he also designed other monumental stone bridges over West Boulevard's counterpart, East Boulevard. From Auburn, NY, Schweinfurth was from a family of craftsmen. He moved to Cleveland in 1883 to design the Sylvester T. Everett residence, one of the first homes on Cleveland's "Millionaires Row" on Euclid Ave. and the largest and most expensive home built in the city to date.

Schweinfurth is most well-known for his buildings in the "Romanesque Revival" architectural style, which was popular in the late 19th and early 20th century. American architects turned to traditions of medieval Europe, specifically the Romanesque period (7th-12th centuries), when designing grand homes and prominent sacred or municipal buildings. Castellated walls, turrets, and buttresses (all represented in Bridge 54) communicated strength and stability to the passersby. According to the Board of Park Commissioner's 1898 Annual Report, Bridge 54 had this desired effect. The report claims that

"numberless favorable comments have been heard upon its [Bridge 54's] artistic beauty as well as upon the appearance of firmness and strength which it impresses upon the beholder."1

Bridge 54 has been a working railroad overpass since its construction. While it originally served four tracks, currently only two tracks are utilized and one has been removed. The bridge has been called several different names depending on the then-current owners of the rail lines, including the "Lake Shore & Michigan Southern Railway Bridge" and "Penn Central Viaduct." Now, the bridge and lines are owned and maintained by Norfolk Southern Railway. Today, Schweinfurth's imposing bridge continues to be a powerful, visual reminder of the resources, care, and attention given to the planning of this neighborhood, and it is an iconic symbol of the Clifton & West Boulevard historic district.