Dedicated in 1980, this historical marker is located near the site of the first Shrine Circus which occurred in 1906. Originally a one-ring fundraising event for the Moslem Shrine Temple of Shriners, a fraternal organization based on Masonic principles, the Shriner Circus grew to an event that drew more attendees than Ringling Brothers circuses. The first Shrine Circus drew 3,000 attendees and only continued to grow. By 1925, the Shrine Circus became a three-ring show with other Temples in the United States also using the circus as a fundraising event. 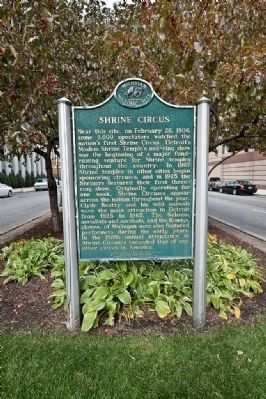 In the early 20th century, Detroit's Moslem Shrine Temple wanted to increase funds and membership. The Shriners International fraternal organization began in 1870 and was founded on Masonic principles. The temple became the first temple to present a circus to spectators. On February 26, 1906, the Shrine Circus performed what was called the Mystic Shriners' Yankee Circus in Egypt. The circus was held at the Light Guard Armory at the corner of Larned and Brush in Detroit, Michigan. The circus sold canaries and had exhibits on the wireless telegraph and electricity, as well as games. Clowns, aerialists, acrobats, singers, and dancers performed. Three thousand spectators watched the one-ring show.

The Shrine Circus continued to grow and moved to the Coliseum at the Michigan State Fairgrounds in 1925. The circus no longer had carnival games but expanded to a three-ring circus. The circus continued to be popular and drew more attendees than the Ringling Brothers. Soon, other temples followed the Moslem Temple and hosted their own circuses.

Image by R. C. at the Historical Marker Database.