The Medical Arts Building is a 12-story structure designed by the well-known architect G. Lloyd Preacher and built in 1927. Unlike the Carnegie Building in the heart of downtown (another 12-story office building designed by Preacher a few years earlier) the Medical Arts Building is vacant. The building was utilized prior to the construction of the multi-lane Downtown Connector just feet away, an urban renewal project that catered to commuters at the cost of many historic buildings and displaced communities. Road patterns got disrupted and the Medical Arts Building was abandoned in the 1990's. The building has gone through multiple changes in ownership since then and almost got rehabbed into a hotel. Plans are in the works once again to convert the building to a hotel; the exterior is protected by an easement on the NRHP-listed building. 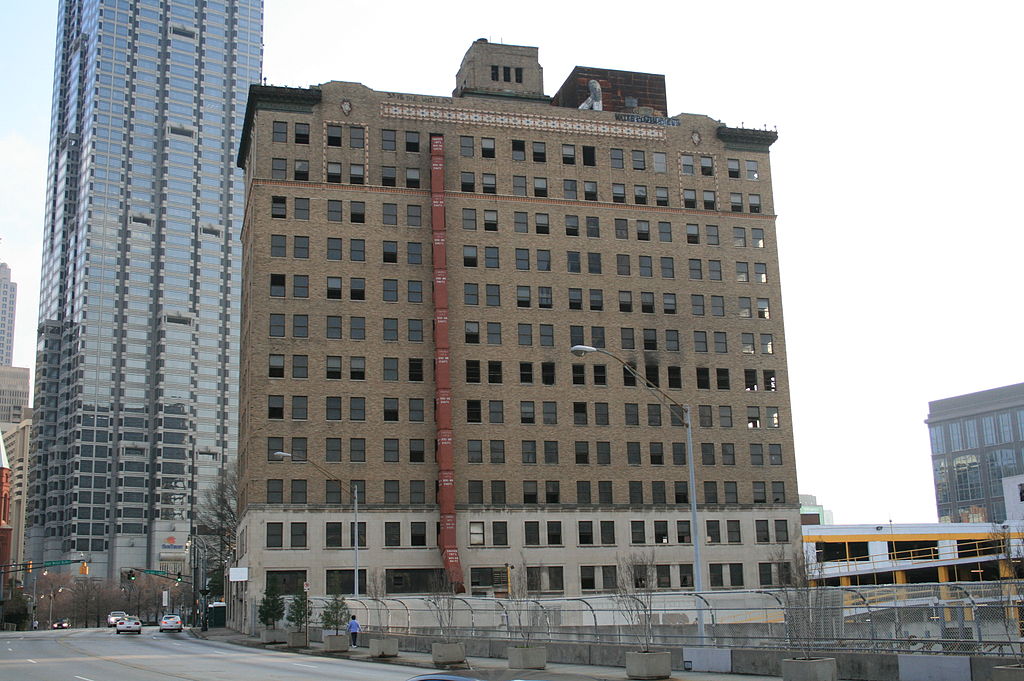 The 12-story skyscraper called the Medical Arts Building has towered over Peachtree Street since 1927. Four local doctors saw the need for state-of-the-art medical offices: Doctors Cliff Sauls, Grady E. Clay, James E. Paulin and Malvern D. Huff. Architect G. Lloyd Preacher's used clean lines, decorative cornice and pilasters in this neoclassical structure. The steel frame building is encased in concrete with an exterior base clad with limestone on the first two floors, buff brick on floors three to ten, and a capital of buff brick on the upper two stories topped with a pressed-metal cornice.

In its heyday the Medical Arts Building was a busy place with a cafeteria, telegraph office and drugstore. The interior corridors were marble-floored interior; a grand staircase with a decorative metal railing and elevator lobbies gave the building a distinctive feel.

Since the mid-1990's the building has been vacant. A record producer planned to convert the building into a boutique hotel years ago but the project didn't happen. Broken windows and graffiti marked the outside of the structure. Advertising banners for the Holiday Inn brands were hung from the building and did little to improve the view. Several floors of the building burned in a fire in 2005. Since the building is within walking distance of both parts of downtown and Midtown Atlanta and includes over 250 parking spaces, maybe the next plan will be seen through. In fact, plans were filed with the city in early 2019 with hopes to convert the building to a 160-room hotel with 2,000 square feet of retail and restaurant space on the ground floor. The Atlanta design firm Cooper Cary is involved. The Medical Arts Building's owner, GBX Group, donated the facade of the building to Easements Atlanta in 2017 in exchange for federal redevelopment tax credits; this protects the historic exterior during rehabbing. The renovation is estimated to cost $40 million and an investment firm, Kim King Associates, has joined the project.

The building is featured in a ghost tour of Atlanta and a spirit named Sally is said to lurk outside the entrance, telling tales of medical experiments held in the building. Hey, would a K2 meter lie??

The building was listed in the National Register late in 2016. The building is one of the first in Atlanta with a covered parking garage, foreshadowing the importance of the automobile to Atlanta. It is significant for its association with the architect, Preacher, and as a surviving example of the expansion of Atlanta's downtown in the first decades of the twentieth century.