The Bell Building was constructed in 1907 and housed the Southern Bell Telephone and Telegraph Company's switchboard. The three-story steel Neoclassical structure with a brick facade has simple detailing and large first-floor windows. In 1922, an addition was built onto the left of the original building. In 1968, Bell Telephone sold the structure to the Trust Company of Georgia who planned to build two skyscrapers. The second skyscraper was never built and the Bell Building was sold by the bank (now SunTrust) to Georgia State University. Today, the building's addition is in danger of being demolished by its owner, the Georgia State University Foundation, to create a parking lot or green space despite opposition from some local residents and preservationists. 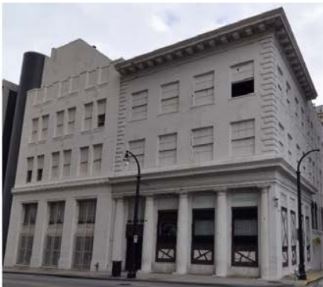 The Bell Building was constructed in two parts, a 1907 original building and a 1922 addition to the left and to the rear of the original. The 1907 portion was built to support four more stories if needed; the addition brought machine-switching and the dial tone to Atlanta for the first time. The addition was designed by a well-known Atlanta architect, P. Thornton Marye, the architect of Terminal Station. A decorative keystone is above the eight original six-over-six windows in the four-bay 1907 portion; this part of the building is covered in sandstone blocks and includes the main entrance with a cast iron Southern Bell logo over the door. The newer front of the building is faced in white glazed terracotta and features the Bell logo. A light well on the flat, asphalt roof separates the two parts of the building.

The building was little needed by Bell Telephone by 1968 who sold the structure to a bank, The Trust Company of Georgia, who planned to build two skyscrapers. Bell Telephone continued to lease the building. The second skyscraper was never built and the Bell Building was sold by the bank (now SunTrust) to Georgia State University in 2006. Mostly vacant since the 1980's, faded lettering from a Mexican restaurant above the plate glass street-level windows hints at a prior tenant of the front portion of the building. The first restaurant in the space was "The Mug" and lasted from 1981 into the 1990's. The later restaurant was "El Azteca" and it closed in 1997. The interior of the vacant building is reportedly in fair but deteriorating condition. Fancy original finishes on the portion of the building that the public would see include marble wainscoting, decorative crown moulding and coffered ceilings. The interior was connected to steam heat and retains radiators in many of the spaces. Some renovations took place for the restaurants with new walls meant to hide the view of the building's central staircase. There is also an electric-powered elevator from the 1920s or so that still worked at last check.

The Atlanta Preservation Center lists the Bell Building as among the most endangered historic buildings in the city. Georgia State University planned to demolish the building as part of a grant-funded project to build a media center at the corner of Edgewood Avenue and Park Place. The plans call for a surface parking lot or green space where the Bell Building now stands. The irony of Georgia State U., which has a graduate program in historic preservation, wanting to demolish an historic building, wasn't lost on the people who started the "Save the Bell" movement. An online petition against demolition has gathered over 2,500 signatures.

Preservationists have argued that there are plenty of parking decks nearby already. Since the building is state-owned it is outside of the city's purview on demolition. The structure is outside of the King National Historic District. The petition urges the Georgia State U. Foundation to consider adaptive reuse of this building which it has owned since 2007, with its great downtown location along the Atlanta Streetcar line and 68,000 square feet of usable space.

Miller, Charlie. The Ivy-Walnut exchange and the Rise of the Telephone in Atlanta. Student paper for Masters in Heritage Preservation program, Georgia State U., unpublished, Fall 2009 semester.