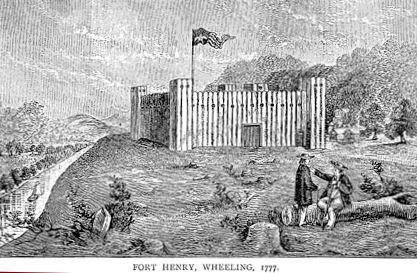 Drawing of Native siege of Fort Henry in 1782. 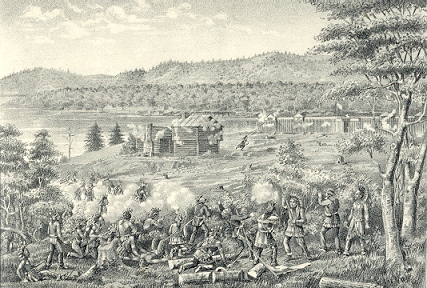 Depiction of Betty Zane's run for powder and ammunition during the 1782 Siege of Fort Henry. 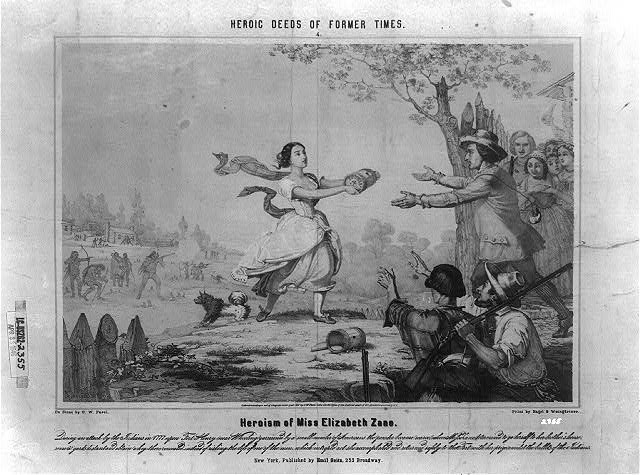 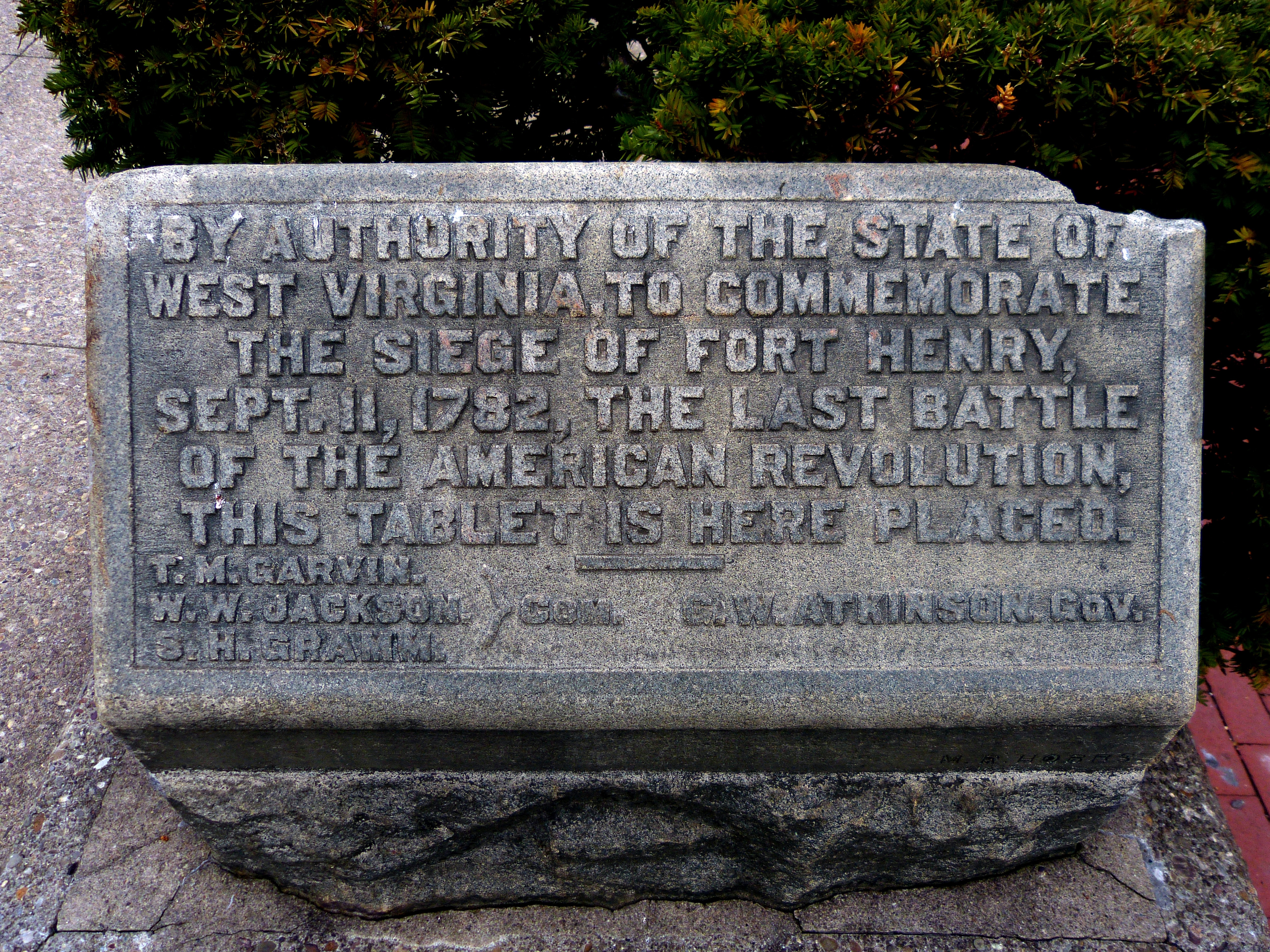 Ebenezer Zane, perhaps the earliest white settler to the area that became Wheeling, West Virginia, arrived in that location in the fall of 1769 and established his claim to land there by “tomahawk right,” girdling trees with a tomahawk to outline the boundaries of his claim. The next spring Zane returned with his family and named their settlement Zanesburg. They were soon joined by other families, among them the Shepherds, Wetzels, and McCollochs. The growing hostility between white settlers and Native groups in the area over this period (which erupted in Dunmore’s War in 1774) eventually convinced Zane and his neighbors of the necessity of constructing a fort. They began in 1774 and eventually completed a defensive perimeter with twelve-foot wooden walls encompassing half an acre that include cabins, a barracks, and several other buildings. Towers stood at each corner of the fort, which was protected on three sides by the nearby river and an adjacent ravine, and in 1781 a two-story wooden structure was added near the gate with a cannon mounted on top of it.

This structure first came under attack in the fall of 1777, either on September 1 or 21 according to various sources. During that time, much of area that fell under the influence of Fort Pitt (now Pittsburgh) was embroiled in a growing conflict between Loyalists in the region and their rebel counterparts. While Zackquill Morgan (founder of Morgantown) moved to arrest the largest band of Loyalists just south of Fort Pitt in late August, the Native fighters allied to those Loyalists were marching to attack Fort Henry. Some 200 Indians from Wyandot, Mingo, Delaware, and Shawnee communities in the region arrived at the fort under the leadership of the Wyandot leader Pomoacan and caught the garrison largely by surprise. Though the rebel commander at Fort Pitt, General Edward Hand, had warned area residents of a potential attack in early August, by September many of the militiamen who had arrived to defend the fort in response to Hand’s warning had departed. So, early on the morning of their arrival, the Indians were able to successfully ambush a party of four militiamen leaving the fort. Two of these men were able to escape back into the fort, however, and successfully raise the alarm. A sortie from the fort under Captain Samuel Mason nearly ended in disaster, forcing the militia to remain inside while the Indians burned many of the surrounding buildings. Reinforcements under Major Samuel McColloch arrived from nearby Fort Vanmetre shortly thereafter and the Indians were forced to break their siege. It was during his reinforcement of the fort that McColloch performed his famous “leap.”

The second siege of Fort Henry occurred from September 11 to 13, 1782 when 300 Wyandot, Shawnee, Seneca, and Delaware Indians attacked the structure with the help of 50 Loyalists from the famous Provincial unit known as Butler’s Rangers. The Native fighters first gathered along the Sandusky River under the Seneca leader Simon Girty, who was captured from a colonial settlement near Harrisburg, Pennsylvania as a child and adopted by a Native family. They then met Butler’s Rangers downriver and accepted the leadership of a Captain Pratt, who led them to Fort Henry. Forty men and sixty women and children were at the fort at the time of the attack under the leadership of Colonesl David Shepherd and Silas Zane. The defense mounted by the rebels was particularly effective as a result of their use of the cannon added to the fort the previous year, which they trained on the attackers as they attempted unsuccessfully to batter down the main gate on the first day of the siege. The cannon was so pivotal, in fact, that the attackers attempted to create their own from a hollowed-out log, which promptly exploded and killed several bystanders.

On the second day, Elizabeth “Betty” Zane left the fort by the main gate to gather ammunition and gunpowder from a nearby cabin. The attackers were so surprised by her brazen departure from the fort that on her trip to the cabin they did not fire on her. On her return trip, they opened fire, but she survived the sixty-foot run to the gate unscathed. Thus resupplied, Fort Henry’s defenders were able to hold out until the September 13, when reinforcements arrived under Captain John Boggs and broke the siege.

The rebels’ defense of Fort Henry in 1777 and 1782 was not only significant in paving the way for future white settlement in the area that became West Virginia, it also helps to highlight to ebbs and flows of events in the region during the American War for Independence. The year 1777 is often remembered for the Battles of Saratoga to the north, but just as important to determining the boundaries of the future United States were the events in the area of Fort Pitt and its environs. A growing movement among Loyalists that year to push back rebel settlers threatened to cave in the new nation from its back door and ultimately helped to determine the relationship between Native groups and the rebellion. The fact that hostilities between these factions continued well after Lord Cornwallis surrendered to George Washington at Yorktown in 1781 and nominally ended the war indicates that that conflict had a much broader scope than is often recognized.