Near this site in 1836, the Baltimore and Ohio Railroad built its original ticket office for Harpers Ferry, from which passengers boarded and departed the train traveling east to Baltimore, Maryland and west to what is now Wheeling, West Virginia. This 1 ½ story, 20-by-30-foot building remained in use until the construction of the current station from 1892-1894. In addition to serving as a waypoint for travelers and goods moving east and west, the Harpers Ferry ticket office was also the backdrop of regular activities by the Underground Railroad in the antebellum period and the 1861 B&O Raids by then Confederate Colonel Thomas J. “Stonewall” Jackson. Such events highlight the centrality of Harpers Ferry to the early history of the United States and more specifically the process by which the institution of slavery was brought to an end. The area is now part of the Harpers Ferry National Historic Park and is located adjacent to the Appalachian Trail. 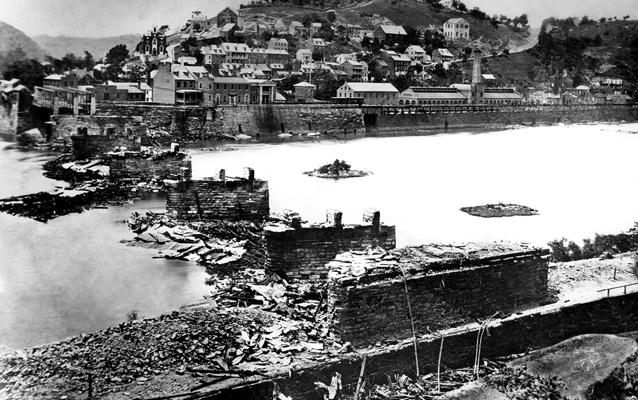 Depiction of Underground Railroad activities on the Potomac River. 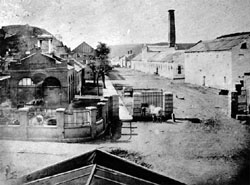 The Baltimore and Ohio Railroad’s arrival in Harpers Ferry was a pivotal turning point both literally and figuratively in the history of early American rail travel. Built to connect the trade networks that extended across the Atlantic Ocean from Baltimore and down the Ohio and Mississippi Rivers from what was then Wheeling, West Virginia, the B&O Railroad was one of the earliest attempts to construct a long-distance rail network in the United States. Although engineers in the United Kingdom had demonstrated the utility of railroads in transporting passengers and goods across short distances, they had largely avoided the issues of long distance and mountainous terrain that promised to face any attempt to connect the eastern and western US by train. So, despite the early optimism of the B&O’s investors that their trains might reach Wheeling within the first five years after construction began in 1828, by 1832 they had only reached Point of Rocks, Maryland. There, the narrow span of terrain between the Potomac River and a series of cliffs put them into direct dispute with their regional competitor the Chesapeake and Ohio Canal for space to build their line, a dispute that took a full year, a series of court cases, and the direct intervention of the Maryland legislature to resolve. Eager to connect with the Winchester and Potomac Railroad being built through Virginia towards Harpers Ferry at the same time, the B&O continued on after this delay to the side of the Potomac opposite their goal by 1834 and completed a wooden railroad bridge across the river in 1837.

Already looking to the future, the B&O had purchased a lot in Harpers Ferry near the convergence of the Potomac and Shenandoah Rivers the previous year, where they constructed a ticket office and several other buildings to service the railroad. Once trains began arriving in Harpers Ferry the railroad once again hit a snag. Hoping to continue its tracks down the Winchester and Potomac line, the B&O entered negotiations to lease several miles of the W&P so that their trains could travel on a direct route from their bridge across the Potomac to a point in the Shenandoah Valley where it could make a gentle turn to the northwest towards Martinsburg. For unknown reasons, however, the W&P refused to lease their tracks, forcing the B&O to reach an agreement with the federal government (which had purchased land for an armory in the town). Eventually, the B&O was able to finalize this agreement and built an elevated track along the edge of the armory grounds. The new route forced the B&O to turn their tracks at almost a 90-degree angle once they crossed the Potomac Bridge, a severe turn that promised a continual threat of disaster until the rerouting of the tracks at the end of the nineteenth century. After this turn was added and the railroad left Harpers Ferry, it reached Martinsburg on May 21, 1842 and Cumberland, Maryland six months later. It took a full decade more for it to make its way to its final destination at Wheeling.

In the meantime, Harpers Ferry and its new B&O ticket office had become a bustling center of activity as a result of the influx of goods and passengers being transported through the area from east to west and vice versa. Among these passengers were runaway slaves fleeing bondage with the help of Underground Railroad conductor John Fairfield, an abolitionist known for going to extraordinary lengths to secure the freedom of slaves and reconnect them with their families. On many occasions, Fairfield posed as a slave trader and resided in a Southern community for months to gain the trust of local white residents before escaping the area with a large number of slaves. In one such effort he masqueraded as an undertaker and escaped with twenty-eight slaves in a staged funeral procession, and in another convinced salt miners near Charleston to fund the construction of boats to transport salt to market on the Kanawha River before promptly loading the boats with the miners’ slaves and escaping with them under cover of darkness. Much of Fairfield’s activity, however, took place in Harpers Ferry, where he would use wigs and makeup to disguise light-skinned slaves, purchase tickets for them, and send them as passengers on the B&O west past the dangerous turn through the armory toward Pittsburgh or east to Carroll County, Maryland where they would turn north to Pennsylvania. Fairfield continued his efforts for twelve years before disappearing in 1860 or 1861. An unidentified man matching his description died at the time of his disappearance organizing a mass escape of slaves in Cumberland County, Tennessee.

By then, however, the nation had erupted in Civil War and Harpers Ferry had become the focus of much military scrutiny. Because the B&O was a key route for the transportation of military personnel and materiel from east to west and Harpers Ferry held a strategically important location at the railroad’s crossing of the Potomac, it almost immediately came under attack by Union and Confederate forces. After the Virginia Assembly voted to provisionally secede from the United States on April 17, 1861 the governor of Virginia, John Letcher, ordered militia troops from Charleston and Winchester under Colonel Kenton Harper to occupy the armory at Harpers Ferry, which Union forces burned hours before Harper’s arrival on April 18. On April 27, the governor ordered then Colonel Thomas J. Jackson to relieve Harper, after which Jackson promptly arrested Brigardier General William Selby Harney as he traveled on the train through Harpers Ferry from St. Louis to Washington, D.C. Eager to disrupt the flow of Union goods on the railways through the town, Jackson devised a plan to destroy portions of the B&O from Martinsburg to Point of Rocks. Putting this plan into effect on May 23, Jackson cut off the lines at those two points and allowed the trains to continue moving into Harpers Ferry on schedule. The engines and their cargo thus bottlenecked in the town, Jackson began plans to haul his booty down the Winchester and Potomac. By June this goal had been largely accomplished, as had the destruction of key portions of the B&O track (including the bridge at Harpers Ferry).