Near this location Luke Jaco established a tavern and hotel servicing the old Northwestern Turnpike (now U.S. 50) that ran through Doddridge County outside West Union. The tavern, known as Jaco's Inn, enjoyed considerable notoriety in the area after its construction in the 1840s for the mysterious comings and goings of its frequently tight-lipped guests. The tavernkeeper himself shared that notoriety, known early on for his frequent conflicts with his neighbors and later for his apparent evangelization after suffering the amputation of his arm in the wake of an attack by one of those neighbors. After this conversion, the story goes, Jaco became a moral man, even going so far as to offer his services as a conductor on the Underground Railroad to runaway slaves using the Northwestern Turnpike to escape north. The inn itself no longer exists, but the cave on Jaco Hill nearby (known as Jaco Cave) where the tavernkeeper allegedly hid runaway slaves remains. 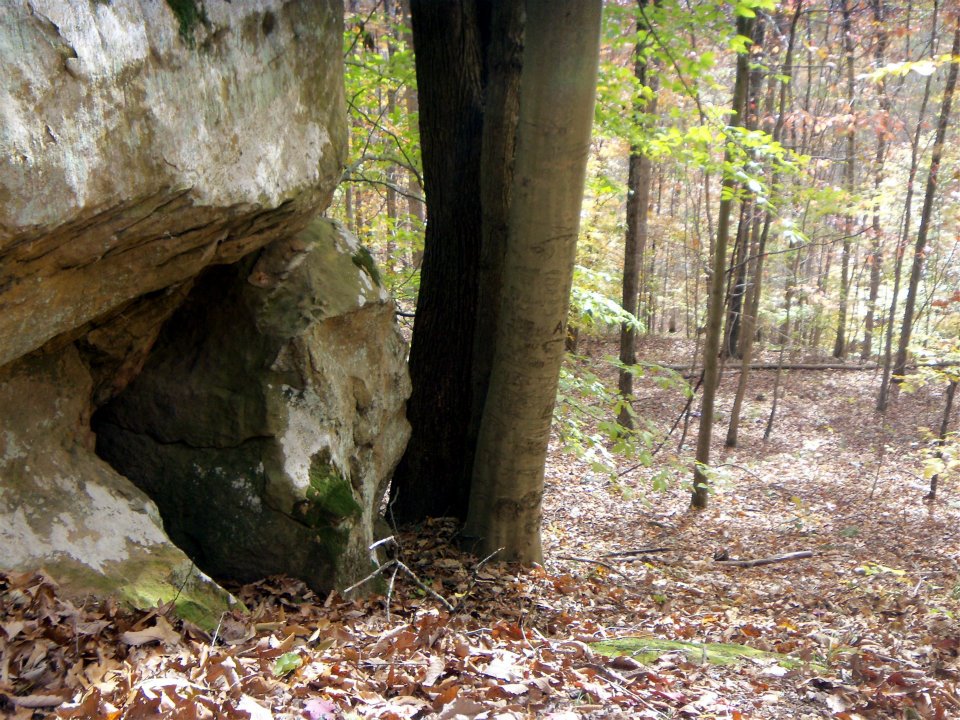 The Northwestern Turnpike that ran along the property where Luke Jaco built his tavern in the 1840s was responsible for much of Doddridge County’s early growth. After the road’s construction the previous decade, support grew for the creation of Doddridge from portions of Harrison, Tyler, Lewis, and Ritchie Counties which finally took place in 1845. The following year, local resident Nathan Davis, Jr. won his fight to make the planned community of West Union the new county seat rather than Lewisport, a town across the West Fork River that’s claim to the seat was supported by Ephraim Bee, the husband of Davis’s niece. Davis laid out the town the year after the county was formed and it continued to grow over the course of the antebellum period. Throughout that era the new county staunchly opposed slavery, a function of the institution’s slow growth in the area in the absence of large plantations like those to the east. When Virginia held its referendum on secession on May 23, 1861, Doddridge County opposed the state’s exit from the Union by over 500 votes.

The area’s political sensibilities and location along several major avenues of transportation to the north made it an ideal thoroughfare for slaves escaping to the free north. Because his property was located along one of these avenues, Luke Jaco’s tavern would have been particularly useful in that regard. Early on, however, Jaco’s character did not lend itself to such an endeavor. Instead, the tavernkeeper was known for his cantankerous demeanor and frequent clashes with neighbors. Rumors abounded in these early years that Jaco robbed his wealthier guests during their stays at his inn and his tavern was known to be frequented by less savory types. At one point in 1846 he was dragged into court by the county’s Overseer of the Poor, who sued him on his neighbor Susannah Tucker’s behalf in order to force him to support the two children he had sired with her out of wedlock. Eventually, it was decided that the daughter, Emeretta Tucker, would in her mother’s home with Jaco’s financial assistance while the son, Benjamin Franklin Tucker, would assume Jaco’s last name and live with his father and Elizabeth (his father’s wife of over a decade who raised Benjamin Franklin as her own).

Just a few years later, Jaco’s behavior led to even more consequences. In 1849, an unknown neighbor ambushed Jaco and shot him in the arm. A passerby found him wounded on the road and took him to Dr. L.R. Charter, Sr., who was forced to amputate his arm. Shortly thereafter the itinerant Methodist minister Reverend Samuel Clawson stayed at Jaco’s Inn and the tavernkeeper (persuaded to introspection by the loss of his arm) embraced evangelical religion. It is reportedly after this conversion that Jaco became an active participant in Underground Railroad activities in the area. According to local accounts, the Underground Railroad conductors that arrived at Jaco’s Inn would signify their intent with a code word. After identifying themselves, Jaco would respond with the same code word to let them know everything was safe. With the coast clear, runaway slaves would exit their hiding places in the conductors’ wagons and follow Jaco to a nearby cave to wait for their transportation to points along the Ohio River.

Jaco’s Inn is not the only reported Underground Railroad in the Doddridge County area and if the tavernkeeper was indeed part of the network of conductors that aided runaway slaves in their quest for freedom he would have been able to rely on assistance from others in the region. Whether or not he was in reality a participant in the Underground Railroad, however, remains in question. Jaco is listed as a slaveowner on the censuses of both 1850 and 1860, calling his alleged anti-slavery activities into doubt. Local historian Jennifer Wilt suggests that the slaves listed in Jaco’s census information may have been fellow conductors living with the tavernkeeper to both aid him in his operations and divert suspicion from the same. Still, it is just as likely that the reports of Jaco’s participation in the Underground Railroad are the result of local mythmaking efforts after the American Civil War.