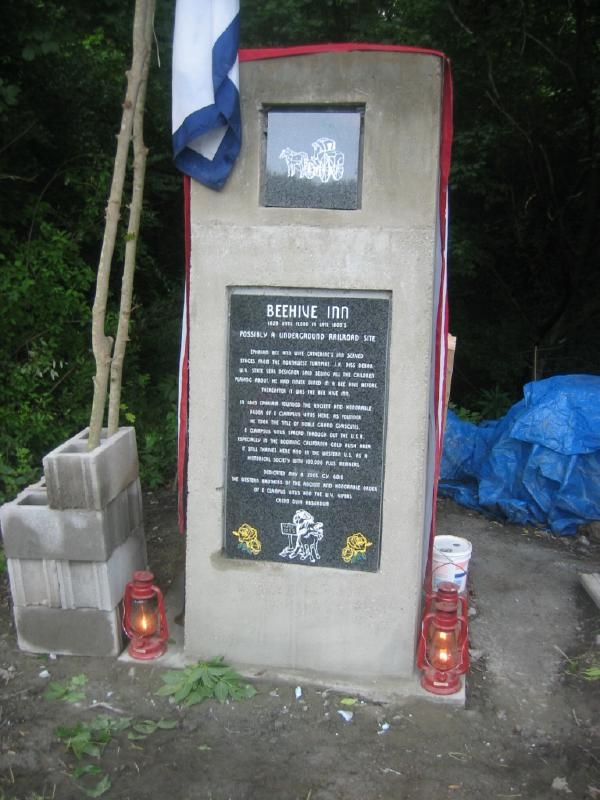 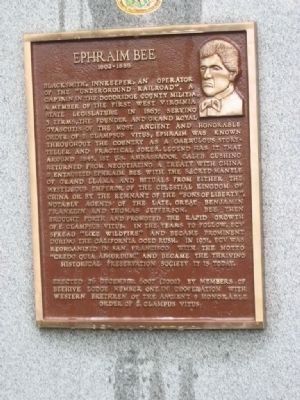 Born in Salem County, New Jersey to Asa Bee and Rhoda Cox on December 26, 1802, Ephraim Bee moved to Preston County in what became West Virginia some time before 1820. By 1822, when he moved to what is now Doddridge County, he had finished his training as a master Blacksmith. The following June (1823) he married Catharine Davis and moved to the small settlement of Middle Island, where he opened a Blacksmithing shop and quickly became involved in local politics. By August of the same year, he claimed an active role in determining the course of the road that led from the bridge across Middle Island Creek to nearby Doe Run. It was not the last time Bee would involve himself in the course of a road through the area. In 1837, when the Northwestern Turnpike was constructed through the region, Bee managed to have it plotted right past his land, which by then contained not only his Blacksmithing shop but a farm, stables, tannery, tavern, and inn. By then the community had been renamed Lewisport, in honor of Congressman Lewis Maxwell, a wealthy local landowner and personal friend of Ephraim Bee (who received his land from Maxwell in token of their friendship).

Maxwell and Bee’s friendship served as the foundation of one party of influence in the area as a movement built for the formation of Doddridge County from parts of Harrison, Tyler, Lewis, and Ritchie Counties in 1845. The other, led by Bee’s uncle-in-law Nathan Davis and the Fitz Randolph family, did everything in their power to stifle their enemies’ ambitions. By the time Doddridge County came into existence, Bee and Davis had been at odds for well over a decade. In 1827, Bee chose to leave the Seventh Day Baptist congregation of which his uncle-in-law was also a member after the church sided with Davis in a legal dispute between the two involving William I. Lowther. The feud continued to grow over the following decade, culminating in the dispute over the location of the new county seat. Bee and his friend Lewis Maxwell favored Lewisport, on the northern side of Middle Island Creek, Davis and the Fitz Randolphs West Union on the southern. Eventually, a petition was circulated within the boundaries of Doddridge asking the new county’s residents to vote on one of the two communities for seat. West Union won, and when the first court session was held at Nathan Davis’ house and Ephraim Bee appeared as a justice of the peace Davis and his allies successfully opposed his presence and ousted him from the proceedings.

According to local legend, Bee was also an active participant in the Underground Railroad at this time. Allegedly, Bee worked extensively with another reported conductor on the Railroad in the area: Luke Jaco. As the story goes, Bee would initiate a prearranged fight at the Beehive Inn every time Jaco planned to transport runaway slaves from their hiding spot in Jaco Cave to the next destination on the Railroad. The fight would necessitate the intervention of the local justices of the peace, preventing them from discovering Jaco’s activities. Whether or not this legend is true is a matter of debate, however. As local historian Jennifer Wilt has noted, Bee’s views on slavery were a matter of public record and seem to suggest that he supported the institution in the antebellum period. These views, documented in the Wheeling Intelligencer during Bee’s 1863 run for legislature against his former friend Joseph H. Diss Debar, establish that Bee was pro-slavery until Virginia’s secession in 1861. When he realized that the institution threatened the unity of the nation, Bee began opposing slavery and favored the readmission of the South as free states. This would make it unlikely for Bee to take an active role in the Underground Railroad earlier in life. The fact that he left the Seventh Day Baptist faith might also make this unlikely, since that denomination was notably anti-slavery.

Regardless, Bee can certainly be credited with one notable activity in the period: the foundation of E Clampus Vitus, a tongue-in-cheek society meant to poke fun at the pretensions of fraternal orders in the nineteenth-century United States. Notorious for his sarcastic wit, Bee thought little of such orders in the heyday of their American existence and formed E Clampus Vitus in order to demonstrate as much. E Clampus Vitus was meant to be less exclusive than organizations like the Freemasons and more prone to acts of revelry. New initiates were introduced to the society with a ritual dunking in water or similar acts of tomfoolery before being forced to buy their entire chapter a round of drinks. Leaders in the organization were styled as the Supreme Grand Humbug and Clampatriarch, while Bee himself received the honorific of Grand Gyascutis and Grand Lama. The society quickly spread to the American West, where it remains in operation today as an organization devoted to the preservation of the history and culture of that region.