The Federal-style brick structure at the confluence of Tom’s Fork and Meathouse Fork outside of New Milton, West Virginia was originally the home of Jepthah Fitz Randolph and his family. After marrying Doddridge County native Deborah Sutton in 1836, Jepthah and his new wife moved to Milton, Wisconsin in 1844 before returning to this area the following year and constructing their new home some time in the next decade. Because they were Seventh Day Baptists, a denomination that staunchly opposed slavery, the Jepthah and Deborah were noted local abolitionists. Their opposition to the institution went so far, in fact, that the couple provided their home as a haven for runaway slaves fleeing to freedom in the north as part of the Underground Railroad. After serving in this capacity until the American Civil War, the Fitz Randolph House remained Jepthah and Deborah’s home until their deaths. It continues to be privately owned today. 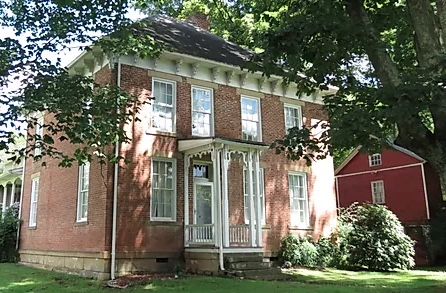 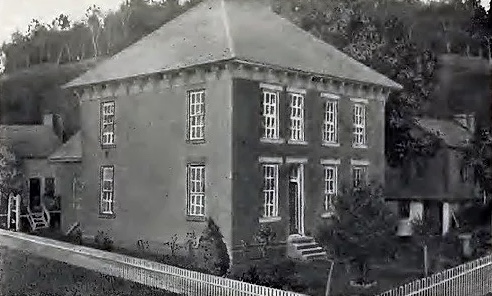 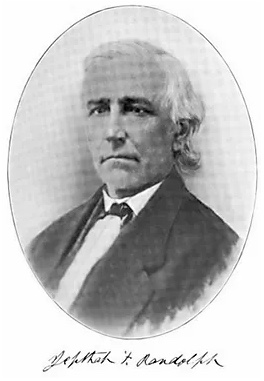 Like many of the counties in what became West Virginia, Doddridge County largely lacked the sizable plantations that characterized agriculture in the eastern half of Virginia prior to the American Civil War. As a result, few residents in the area owned slaves. The largest slaveholder in the county in 1860 was Frank Maxwell, who claimed six slaves in the census of that year. Maxwell’s neighbors and fellow Doddridge County citizens were primarily small landholders operating family farms and other businesses, among them a burgeoning timber industry that eventually grew to be one of the largest employers in the area. Because few of the county’s residents were personally or directly invested in the institution of slavery a majority opposed secession in the May 23, 1861 referendum in Virginia that resulted in that state’s exit from the Union, a majority that reportedly numbered somewhere between 500 and 600 votes. Prior to that event, the county’s loose connections to slavery also made it an ideal thoroughfare for runaway slaves fleeing Virginia for the free north along the Salem and Harrisville Turnpike. That road, completed in 1852, ran directly through Jepthah Fitz Randolph’s property in Doddridge County as a direct result of his personal lobbying.

Jepthah Fitz Randolph was born in 1814 in Salem, Harrison County, to Jonathan Fitz Randolph and Mary Davis. Two decades later, at the age of 21, he married Deborah Sutton, and settled near her childhood home in Greenbrier Run, Doddridge County, to start a family. By the time they made the decision to migrate westward in 1844, they had four children, who accompanied their parents on the wagon journey to Milton in what is now southern Wisconsin. Jepthah and Deborah chose Milton because its founder, Joseph Goodrich, and many of its inhabitants were of the Seventh Day Baptist faith like themselves. The Seventh Day Baptists were staunch abolitionists, a conviction that culminated in their declaring slavery a sin and proclaiming the fight against it a moral obligation for all members of the denomination in 1854. Goodrich and the other citizens of Milton answered their church’s call: Goodrich’s Milton House Inn, where the Fitz Randolph’s stayed before purchasing land in the town, had a tunnel beneath it for concealing runaway slaves on their journey towards Canada.

The Fitz Randolphs carried this example with them on their return journey to western Virginia, which they made the following year after Jepthah became dissatisfied with his land there and sold it for wheat. After living in Salem for two years Jepthah purchased land in Doddridge County at the confluence of Meathouse Fork and Tom’s Fork. Shortly thereafter he lobbied for the construction of a post office nearby and was appointed its postmaster, a position that gave him the power to choose a new name for the community. He chose New Milton.Jepthah also leveraged his local influence to determine the course of the planned turnpike from Salem to Harrisville. That road, completed in 1852, ran straight through his property. By 1855, he had completed his family’s new home on that property, a brick, two-story, Federal-style structure with nooks, crannies, and crawlspaces hidden throughout. The Fitz Randolphs used these hiding places to secrete runaway slaves as they passed through Doddridge County via the Salem and Harrisville Turnpike on their way to the free north.

After leaving the Fitz Randolph’s house, runaway slaves may have stayed at one of the other Underground Railroad stops in Doddridge County before continuing westward toward Harrisville. From there, they most likely went on to Parkersburg before crossing over into Ohio where other Underground Railroad conductors would guide them on their journey through free territory patrolled by slave catchers and possibly on to Canada where a more certain liberty awaited them. While that leg of the trek has received considerable attention, however, slaves’ flight through the unfree South with the aid of Underground Railroad conductors living in slave territory has been given much less attention. The presence of structures like the Fitz Randolph House in New Milton both complicates the narrative of a solid South in which every resident supported the institution of slavery while reemphasizing that anti-slavery advocates in that region were truly in the minority. The Fitz Randolphs were not alone in their fight against the institution but they certainly had few compatriots, and their actions risked both social and legal consequences.