This historical marker commemorates the first Jewish religious services held in San Francisco in September 1849. These religious services took place in a second floor storeroom near the intersection of Montgomery and Jackson Streets. The services were attended by Jews from Austria, Poland, Prussia, Bavaria, England, and various parts of the United States. Many of the Jews in attendance had recently immigrated to San Francisco for the 1849 Gold Rush. The historical marker refers to Yom Kippur, the Day of Atonement, observed by Jews on September 26, 1849, as the date of the first Jewish religious services in San Francisco. However, the High Holy Days would have commenced ten days earlier with Rosh Hashanah, the beginning of the Jewish New Year. The observance of Yom Kippur is thought to be the first known public worship service held by Jews anywhere in the western United States. The historical marker was erected by the California Centennials Commission and the Society of California Pioneers on September 6, 1950. As noted on the marker, the site is also a California State Landmark. 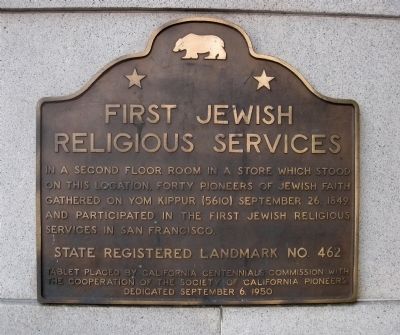 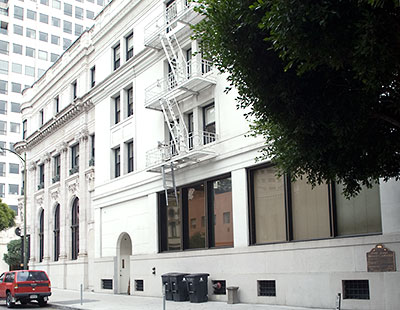 In a second floor room in a store which stood on this location, forty pioneers of Jewish faith gathered on Yom Kippur (5610) September 26, 1849, and participated in the first Jewish religious services in San Francisco.

Of the forty people in attendance, only one female was present, Mrs. Barnett Kessing. The storeroom was an assayer's store where miners during the 1849 Gold Rush could bring in bags of gold dust to be weighed and measured for purchase. Just a few blocks away on Jackson Street, another group of Jews also gathered for Yom Kippur in a tent owned by a young merchant named Lewis Abraham Franklin. The two separate services held on Yom Kippur in 1849 reflect the tension between the different groups of Jews who had immigrated to San Francisco during the Gold Rush. German Jews, especially those hailing from Bavaria, considered themselves apart from the Jews from Poland and other areas in Eastern Europe.

On September 6, 1950, a historical marker was erected to commemorate the location of the first public Jewish religious services held in Franklin's second floor storeroom on Montgomery and Jackson Streets. The marker was sponsored by the California Centennials Commission in conjunction with the California Society of Pioneers. The building upon which the marker was mounted is now occupied by the Church of Scientology. It is located within the Jackson Square Historic District.