The Rockaway Courthouse is a three-story, V-shaped building on Beach Channel Drive in Rockaway Beach built in 1931 to 1932. The main entrance features a Greek Classical Revival style portico. After New York City consolidated its courthouses, the building was no longer used for the court system after 1962. The Rockaway Courthouse was listed in the National Register of Historic Places in 2014. It is significant for its architectural style and for being an intact example of high style civic architecture associated with the growth of Rockaway Beach. Vacant for many decades, the building is being renovated in 2019 and will house doctors' offices. 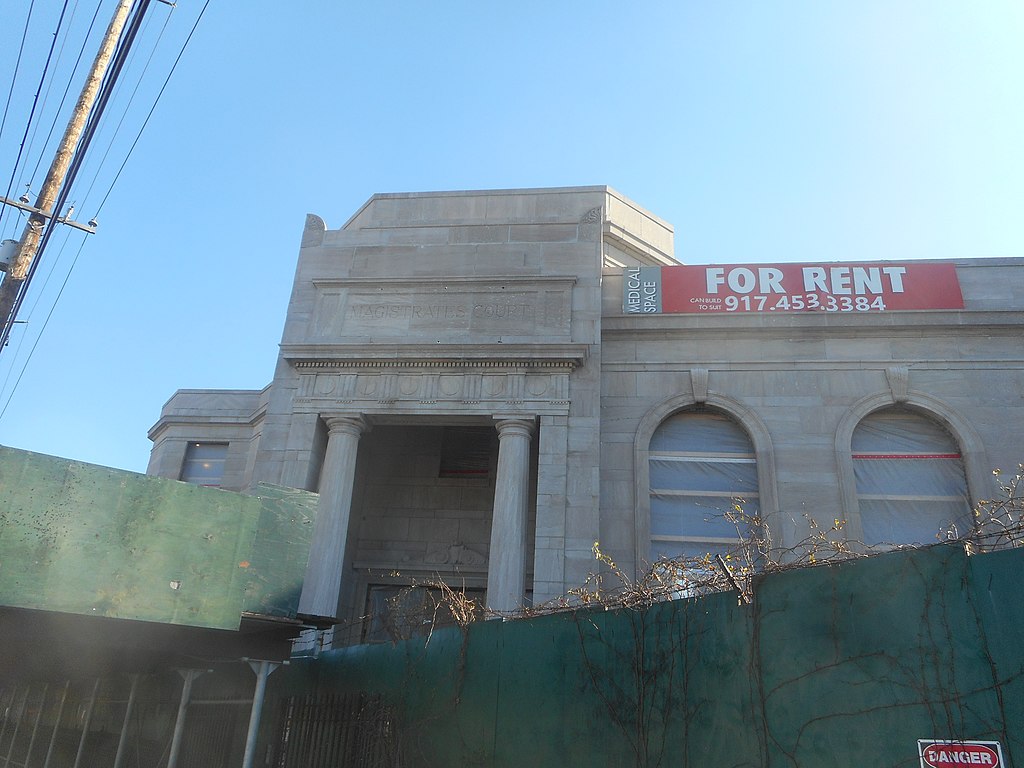 The structure built as the Rockaway Courthouse on Rockaway Beach from 1931 to 1932 was last used as a municipal building in 1962. During its time as a courthouse, the structure served the local Municipal and Magistrates Courts. Rockaway Beach is a narrow peninsula that forms the western end of Long Island. Rockaway Courthouse is only only block south of Jamaica Bay and four blocks north of the Atlantic Ocean. The courthouse is just east of the Cross Bay Bridge linking Rockaway Beach to the Queens mainland. When crossing the bridge southbound, the courthouse is prominently in view, surrounded by mainly residential properties in the "Hollands" section of Rockaway Beach, named for the founding family who settled here in 1858.

Constructed of limestone on a concrete foundation, the steel-framed building is V-shaped with three stories plus a basement. Built in the Classical Revival style, the architect was Paul C. Hunter. The tall central core contained office space and is flanked by two wings at 45-degree angles containing the former courtrooms. Octagonal rooms in the central core abut the wings. The Municipal and Magistrates courts each occupied their own wing. The front facade features an ornate Greek style entrance portico with fluted Doric columns and engraved entablatures reading "Municipal Court" on the east and "Magistrates Court" to the west. The perimeter of the building is wrapped by a projecting stone water table with plinth course. Two types of windows are present: wood double-hung sashes and steel 20-frame lunette topped in the courtroom spaces. Steel bar grates on windows in the west wing basement reflect its former function of housing prisoners. Each wing has its own classical entrance portico. The wings open to a concrete-paved courtyard to the south.

The largest rooms in the building were the two courtrooms. A suspended plaster ceiling in the double-height courtrooms was divided into twleve recessed square coffers with decorative profiles and applied egg-and-dart composition molding. The building contains about 25,000 square feet. A decorative steel picket fence painted Black surrounded the half-acre tract on three sides in recent years.

New York City consolidated its courthouses in the early 1960's and the Rockaway building was no longer used for the court system. The fairly young building remained vacant for decades. It was used a few times in the 1970's by local art groups but was mothballed since then, with the exterior surroundings becoming overgrown. At one point the building was being considered for a recreation center but that did not materialize. No fixtures or furnishings remained in the building and many windows were infilled.

Prior to the construction of the courthouse, the Jamaica Bay Yacht Club occupied the spot which was then in the bay and connected to the island by a long dock. In the 1920's marshland along the north edge of this part of Rockaway was filled with sand. Beach Chanel Drive was paved along the infill, becoming a major east-west route across the island and streets were extended northward to intersect with the drive. A number of historic buildings, including the yacht club, were destroyed as part of the infill project.

Rockaway Courthouse was listed in the National Register of Historic Places in 2014. The building is under renovation by the new owners, Harmony Rockaway LLC, in 2019 and will become doctors' offices in 2020.

not applicable - will be medical offices