This historical marker commemorates the establishment of a West Coast chapter of the Salvation Army in 1883 by Major Alfred Wells. It notes the original storefront location where this charitable and religious organization provided its first West Coast services to the public. The Salvation Army is known for setting up “collection kettles” at neighborhood street corners and storefronts to collect monetary donations during the Christmas season to help fund its programs and services year-round. The organization debuted its first collection kettle in San Francisco in 1891. With the appearance of a "crab pot", it was set up near the Oakland ferry landing to collect funds for out-of-work fishermen during a period of economic depression. This was done in the hope of funding a Christmas dinner soup kitchen for those in need. In honor of the 60th anniversary of the Salvation Army’s West Coast operations, a historical marker was erected in 1943. It appears near ground level, at the base of 809 Montgomery Street just north of Jackson Street.

The Salvation Army's kettle collection at Christmastime, photograph circa 1908 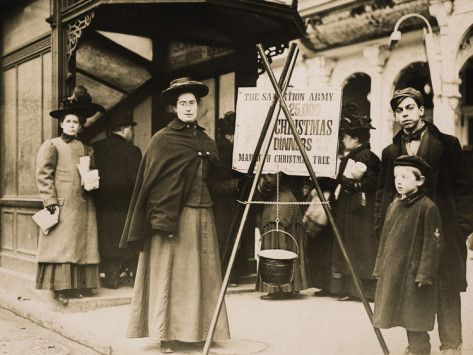 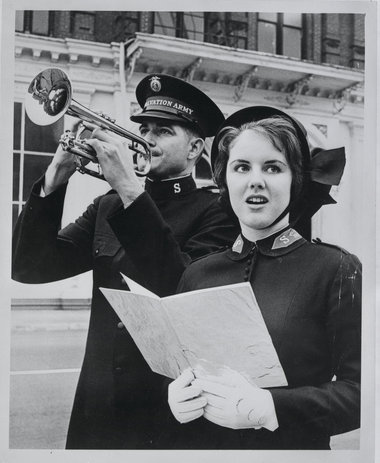 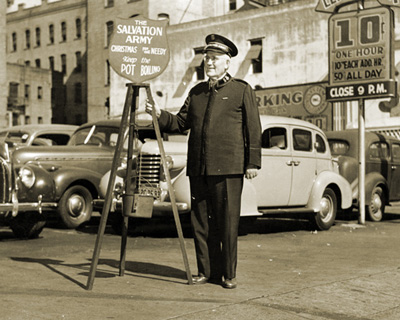 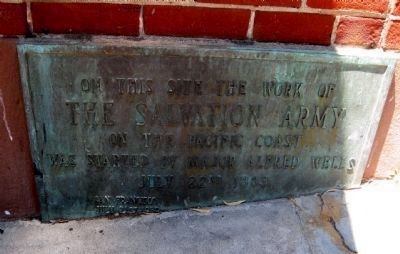 The Salvation Army was originally founded in England in 1865 by William Booth, a London minister. Booth decided to take his preaching and ministry out of the pulpit and into the streets in London’s East End, where he sought to directly help the homeless, the poor, and the hungry. Through his ministry, Booth accepted many members of society who were not often welcomed within the traditional churches in Victorian England. In addition to the poor and homeless, this also included thieves, prostitutes, and gamblers.

Booth’s ministry efforts evolved into the establishment of a religious and charitable organization, the Salvation Army, which he founded in England in 1871. This organization was initially staffed by volunteers and operated according to a hierarchical structure modeled after the military. Volunteers wore uniforms and held titled positions styled after military uniforms and rankings. In addition, the Salvation Army's evangelization efforts were often accompanied by its own military-style brass band. Through the establishment of this new social service organization, Booth sought to provide aid and assistance to those in need, while also encouraging their conversion to the Christian faith.

Following the 1906 earthquake in San Francisco, the Salvation Army also became active in disaster relief efforts throughout the city, setting up tents and providing meals for those in need. During World War I, the Salvation Army again expanded its efforts by attending to soldiers stationed in Europe. Later, amidst the Great Depression during the 1930s, the organization boosted its domestic efforts 700 percent to combat hunger through the provision of soup kitchens throughout the United States. In 1941, the Salvation Army then became involved in the creation of the U.S.O. (the United Service Organization), which linked several religious and social service organizations together to provide relief to troops during wartime amidst the outbreak of World War II.

Today, the Salvation Army continues to be active in the United States and across the globe. Its social services have expanded considerably since the nineteenth century, when the organization defined its focus as the relief of material and spiritual poverty. In addition to maintaining its religious and spiritual orientation while providing poverty relief and disaster relief, the Salvation Army also currently addresses related issues such as domestic violence, homelessness, hunger, drug addiction, gang violence, and illiteracy. It is now a major social service provider, operating in nearly every corner of the world.