Prior to 1906 when the park's name was changed to Westerleigh, this greenspace bounded by Maine, Neal Dow, Springfield, and Willard avenues, this Staten island commons area was known as Prohibition Park. The park opened on July 4th, 1888 and this was the site of many political speeches by advocates of banning the production and sale of alcohol at the turn-of-the-century. One newspaper account from the 1890s estimated 8,000 people packed into an auditorium that was located within the park. Staten Island became the 5th Borough of New York City in 1898, and the city maintains the park and its bandstand which was constructed in 1923. 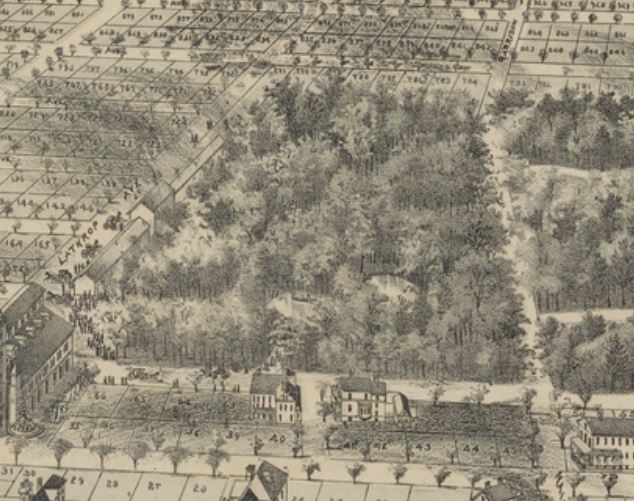 Auditorium at corner of park on Willard, Park Hotel behind on left 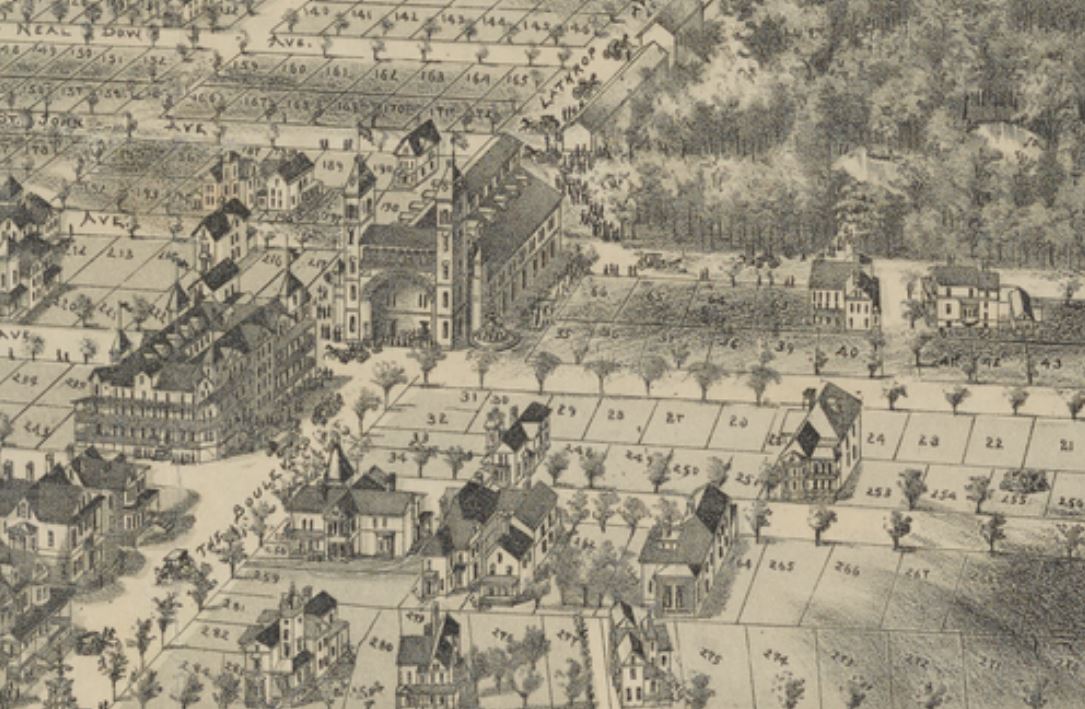 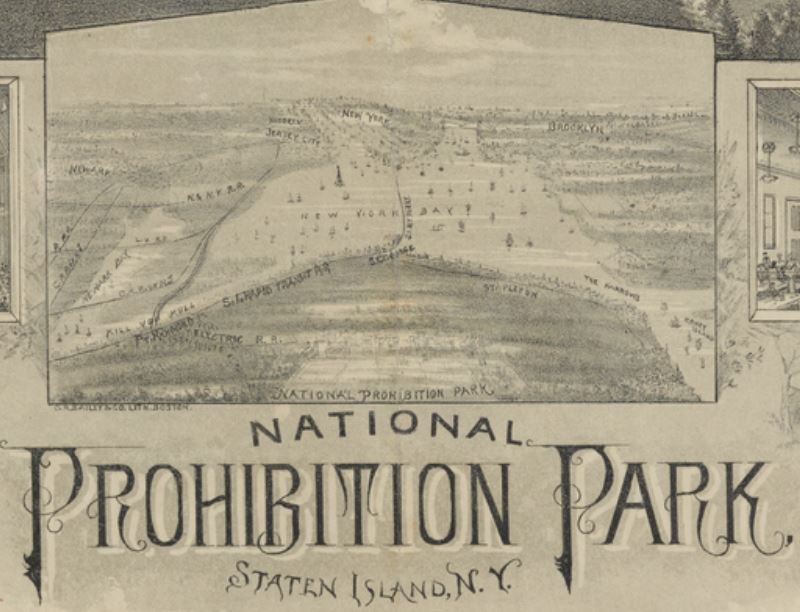 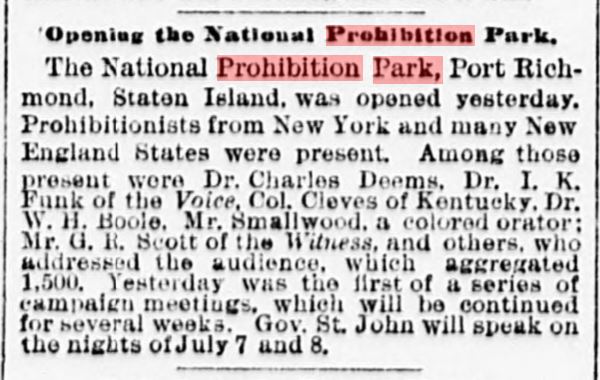 Prohibition Park opened on northern Staten Island on July 4th, 1888. The 25-acre complex was tied to the temperance movement, the philosophy of eliminating or moderating the intake and sale of alcoholic beverages. The land was purchased from John Vanderbilt's daughter, Sarah, in 1897 by the National Prohibition Campground Association. The complex featured stables, picnic areas, ponds, a huge auditorium and the Park Hotel. The Temperance Fountain, a staple feature of the movement, offering drinking water to all, was extra fancy with colored electric lights. Initially more of a summer meeting grounds, the complex began offering individual house lots for sale, as long as the buyers agreed to a clause of not serving or selling alcohol.

Two streets flanking the picnic grove and still outlining the modern-day park are named by influential folks in the nineteenth-century prohibition movement: Neal Dow and Frances Willard. Mr. Dow (1804-1897) was a politician called the "Father of Prohibition." A native of Maine and a Quaker, Dow organized a temperance union in the state in 1838 and helped pass prohibition against liquor laws in Maine before the Civil War. He ran for U.S. President in 1880 as the Prohibition Party's candidate, eleven years after the party was established. The oldest minor political party still in existence, the heyday of the Prohibition Party was in the final decades of the nineteenth century. Ms. Willard (1839-1898) was a professor at Northwestern University near Chicago. She became involved with the Womens Christian Temperance Union (WCTU) in the Midwestern U.S. She attempted to combine the temperance movement with suffrage for women, sometimes bringing her at odds with the WCTU. She ended up being president of the WCTU from 1879 until the end of her life.

Prohibition Park was the site of many a political speech. One speech in 1893 lamented the New York City Board of Health recommendation to mothers. A circular printed in several languages and distributed in the city offered this advice in caring for children: On the hottest days a few drops of whiskey may be added to either water or food...not to exceed a teaspoonful in 24 hours. A New York City doctor reported that women on the Floating Hospital of the St. Johns Guild sometimes carrying drunken children in their arms, to keep them quiet, too poor or ignorant to heed the dosage restrictions.

For a brief time, those uncomfortable with the political and societal links of the Prohibition name had the park changed to Westerleigh Park. A newspaper article in September 1897 proclaimed that the residents had voted overwhelmingly for the name change and that "Prohibition Park was no more." The park's residents were described as "high-class" but that the influx of new residents not bound by the old rules on Prohibition wanted a name sounding more "high sounding." The name change didn't really stick until later on, though.

The Shinnecock, a ship loaded with ailing soldiers from the Spanish-American War, sailed to New York City in September of 1898. A Dr. Kellogg operated a sanitarium at the Prohibition Park complex and requested that some of the soldiers be sent to him, if they could abstain from alcoholic drinks. The ship was met at the Pike Street pier by Major D. M. Appel, an Army Surgeon. Appel had Kellogg enter the ship and talk to the soldiers in their staterooms, to be sure that they agreed to the terms. Apparently, quite a few were fine with a liquor-free convalescence on Staten Island.

The National Prohibition Park donated part of the complex's 15-acre "picnic grove" to New York City in 1907. One writer in the 1920's, after national Prohibition went into effect, lamented "Where is Prohibition Park, which used to exist on Staten Island several decades ago? Now, when it should be in its heyday, is is no more." An octagonal bandstand was built in the park in 1923 and has been the site of concerts for nearly a century. New York City still owns Westerleigh Park and its three acres of green space. The Westerleigh development surrounds the park, and is still home to many Gilded Age era homes.