The Neville House was built in two sections and the oldest portion dates to about 1770. Built in vernacular style, the house is made of red sandstone. The two-story veranda would be at home in the Caribbean. The house was advertised for "sale and salvation" in 2011, looking for someone with deep pockets for badly-needed renovations and a love for old houses. The building once served as a tavern known as Old Stone Jug and in the 1910s as the Knickerbocker Hotel. The house currently appears to be vacant and boarded up. It was listed in the National Register in 1977. 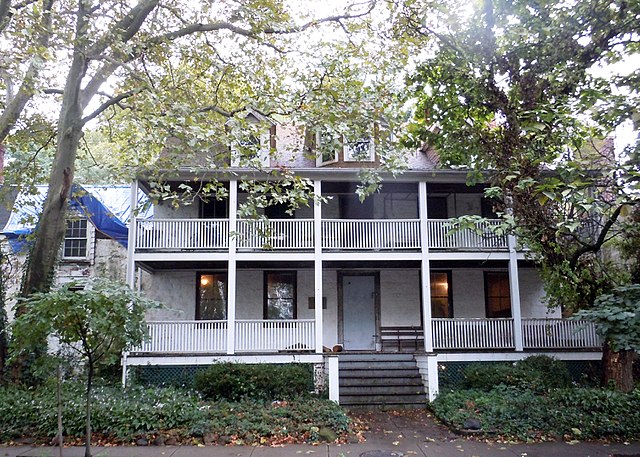 Thought to be one of the few large, pre-Revolutionary houses left in New York City, the Neville house is built of red sandstone, rough-cut, that is now whitewashed. The original portion of the home may date to about 1770 although deed research indicates construction in the 1780's. The 2-1/2 story house has a high basement and faces the Kill Van Hull waterway. The east wing is 1-1/2 story (and likely the location of the cistern incident as described below). The dormer windows in the steep-pitched gable roof are a later addition.

The two-story veranda is a feature more often seen in the Caribbean than New York; some think the builder or designer was a sea captain who had traveled to the Caribbean and adopted the style. Captain John I. Neville, for whom the house is named, was a retired naval officer.

Neville actually may have been the second owner, based on deeds, with the original owner being Richard Housman. One clue that the house may be post-Revolutionary is that no record has been found of the house being occupied during the British occupation of Staten Island.

The house became the home of a judge, Jacob Tysen (1773-1848), and his son, Raymond M., by the early 1800's. A genealogy of the Tysen family places another son, Richard, in the Tysen home. Jacob used the first floor parlor as a courtroom; Raymond wrote a history of Staten Island. Around 1860 the home passed out of Tysen family ownership. According to a modern history of Staten Island, Tysen and Neville both married daughters of the original owner, the Houseman family. One owner of the house in the 1870's or 1880's was the Hayes family, according to map evidence.

The building became a tavern known as the "Old Stone Jug" for a time, with a ready clientele being so close to Sailors' Snug Harbor, (built in the 1830's as a home for retired sailors and now a National Register Historic District). A little-known tidbit is that a tourist guidebook from 1916 identified the Neville House as the Knickerbocker Hotel. The building displayed a "gaudy gilt brewer's sign" and an interior with a barroom on one side and dining room/ parlor on the other, sort of like inns in England. The author was not a fan of the new "steel" ceilings (likely dropped tin ceilings). The 1916 guidebook attributes the house name to John Neville of the U.S. Navy. The author recommended the hot roast beef sandwich costing 15 cents since it was of generous size and excellent quality. The second edition of the tourbook, published in 1923, repeats the 1916 information, down to the price of the sandwich; so it is likely the info from 1916 was recycled in 1923. A modern book on Staten Island dates the Knickerbocker Hotel in the building beginning in 1892 and attributes "Old Stone Jug" as a nickname for the hotel.

The house looked to be in excellent condition on the outside in a 1932 photograph of the home by Percy Sperr (Staten Island Historical Society). The image pictures a neatly landscaped front yard with low clipped hedges along the sidewalk and young trees behind the hedges carefully trimmed. Awnings connected to both stories of the front veranda protected the central entrance bay. No commercial signs were evident so the house was likely a home by then.

The house condition had deteriorated by 1995 when Mark Landis purchased the house; it became his home, up to his death in 2011. The new owner in 2012 was walking through the even-more deteriorated home and fell through rotted floorboards into an old cistern, 12 feet deep, originally in the yard to collect rainwater. Although mud broke her fall, she was seriously injured. She and her husband had intended to create an inn at the home.