Located just east of Huntington on Route 60, the East Drive-In Theater was the largest drive-in in the Tri-State. The theater, which was opened in 1950 by the Greater Huntington Theater Corporation, had room for over one thousand cars, along with a concession stand and a playground. The East enjoyed great success during the 1950s and 1960s, at a time when over four thousand drive-ins were built across the United States. By the 1970s and 1980s, however, business at the East began to decline with the introduction of VHS, cable TV, and multiplex movie theaters, as well as the downsizing of cars. In 1993, the East Drive-In closed and was quickly demolished to make way for a Walmart. Today, the site of the former theater is home to a medical mall, and only a handful of drive-ins remain in West Virginia.

The theater's marquee for its opening in 1950 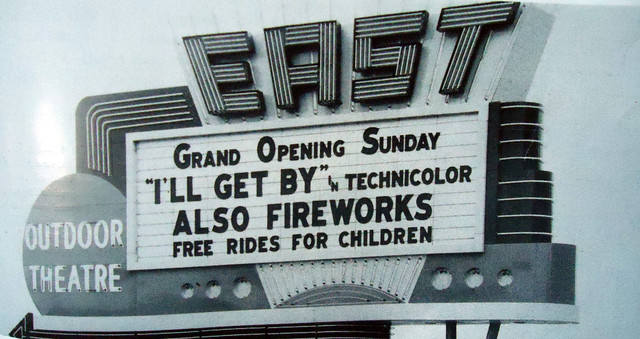 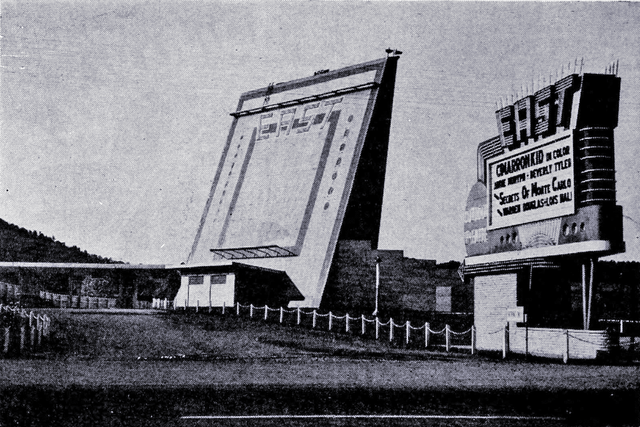 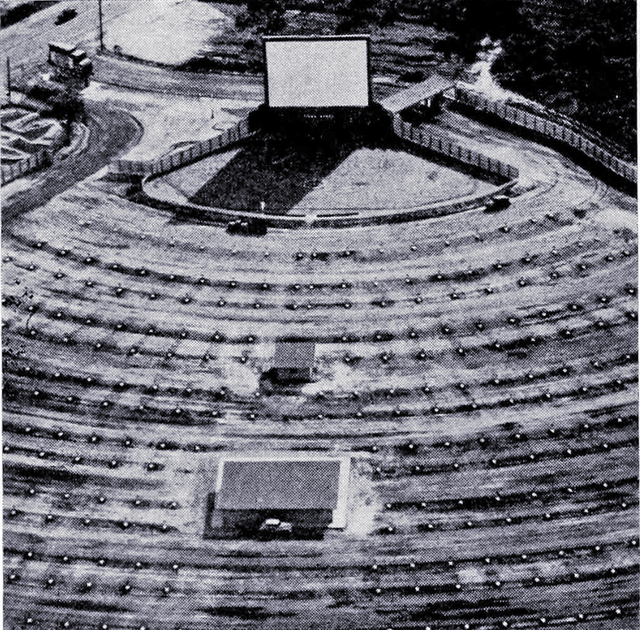 The projection booth at the East, 1952 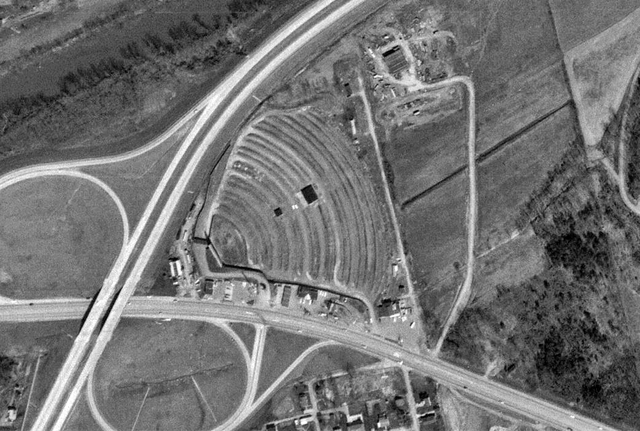 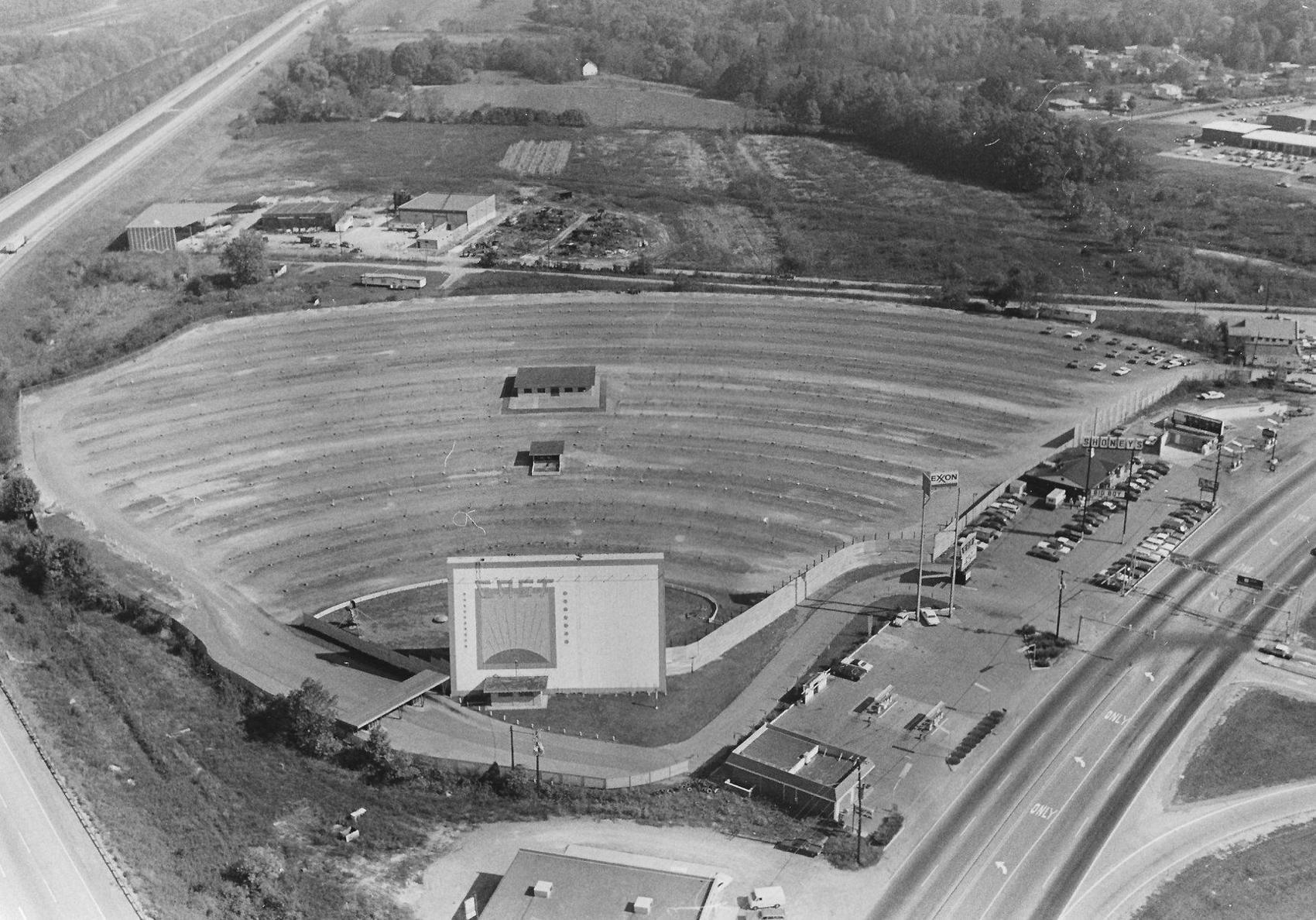 Now an icon of American entertainment, drive-in movie theaters were introduced as early as the 1910s. Richard Hollingshead opened the first patented drive-in on June 6, 1933 in New Jersey. He introduced the drive-in as an alternative for people who could not comfortably fit into small seats at movie theaters, as well as a solution for families with noisy children. Indeed, drive-ins presented an entirely new way of watching movies, With the advent of in-car speakers during the 1940s, the popularity of drive-in theaters really began to rise, and soon they could be found across the country. In the Huntington area, the first drive-in was the Ceredo, which opened in June 1948.

Two years later, the East Drive-In opened just east of Huntington on Route 60. The East Drive-In was owned by the Greater Huntington Theater Corporation, which had long several many movie theaters in the Huntington area, including downtown’s Keith Albee. With over one thousand parking spaces, the East was the largest drive-in theater in the Tri-State. Along with the giant screen onto which movies were projected, the drive-in had a concession stand as well as a playground. Customers listened to the movie’s audio through speakers that they would take off a pole beside their cars and place in their windows, though the speakers were later replaced with a broadcasting system that allowed moviegoers to listen on their car radios.

The East Drive-In quickly became very popular, selling out on almost every weekend. The theater appealed to a wide variety of people, from families with restless young children to couples looking for a cheap date and a bit of privacy. The opening of the East and its quick success coincided with a dramatic rise in the popularity of drive-in theaters across the United States, as almost 3,000 were built between 1946 and 1953. By 1958, more than 4,000 drive-in theaters existed nationwide. During the 1950s and 1960s, drive-ins like the East became so popular that business at indoor theaters began to decline. Neighborhood theaters, which usually screened second-run movies at a discount, were especially hard hit by the popularity of drive-ins and the simultaneous rise of television, leading many to close.

Over time, however, the golden age of drive-in theaters came to an end. During the 1970s and 1980s, business at drive-ins like the East began to decline due to several factors. Americans had appealing new options to choose from in terms of where to watch movies: they were now able to watch at home with VHS and cable TV, or they could go out to new multiplex cinemas in malls. At the same time, drive-ins lost a bit of their appeal, as cars generally became smaller during the oil crisis of the 1970s and were no longer as comfortable to watch movies in. By the early 1990s, the East Drive-In, like many others nationwide, was struggling to stay in business, despite the regular attendance of its most devoted fans.

The East Drive-In closed down in 1993, when its lease was bought out by Walmart. On November 6 of that year, the once-popular drive-in was torn down and construction began on the supermarket. In 2006, the Walmart was replaced by the Huntington Internal Medicine Group’s Regional Medical Center, which remains at the site today. Although no drive-in theaters remain open in the Huntington area, there are a few hundred drive-ins in business throughout the country, including a handful in West Virginia.