If you have ever wondered about the history of the Big Mac or wanted to know the rest of the history behind the ever popular golden arched restaurant, you will be interested to know that there is a museum to quench your curiosity! The McDonald’s #1 Store Museum was constructed in 1984 in order to preserve the franchise’s legacy and provide information to the public. Here you find an array of information about McDonald’s through various mediums. The building is a replica of the original store that had sat in its place before the museum was constructed. The original store was constructed on April 15th, 1955 by Ray Kroc. The appearance of the restaurant was built strongly resembling the McDonald brothers' original blueprints. Inside the museum you will find various appliances that were used such as the original fryers, soda barrels, grills, and milkshake mixers. A crew of mannequins, sporting 1950’s McDonald’s uniforms, are incorporated to display how the restaurant operated. In the museum’s basement is also a collection of vintage ads, photos, and a videos about McDonald's history.

The outside of the McDonald's museum. 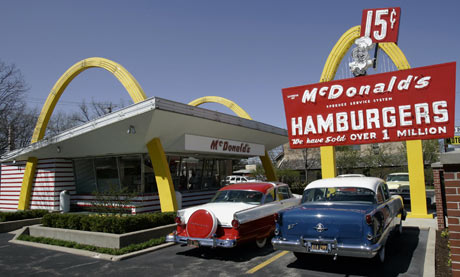 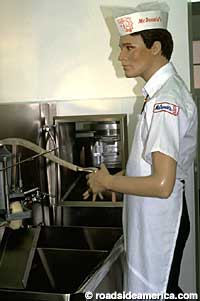 Upon arriving at the McDonald’s #1 Store Museum, you will be greeted by the smiling face of the original mascot, Speedee, displayed high with the golden arches.  Speedee was the mascot for McDonald’s to represent their speedy assembly-line method of cooking. This system can be seen being reenacted inside by a crew of mannequins. The all-male mannequin workers are dressed in the 1955 McDonald’s uniform of dark trousers, white shirts, aprons and paper hats. They are displayed as working the original appliances that the restaurant had used in the 1950’s. You can see the original vat fryers, soda barrels, grills, and Prince Castle Milkshake Multi-Mixers.

This McDonald’s may not have been the very first or even owned by the original McDonald brothers, but this store marked the beginning of the large expansion of the franchise. On April 15th 1955 the 9th McDonald’s was built and joined the chain of restaurants. In Des Plaines, Illinois, it was opened by Ray Kroc. Ray Kroc was the man who put McDonald’s on the map. Originally working selling Prince Castle Multi-Mixers, Kroc took interest in the McDonald brothers’ restaurant after they had purchased 8 of his mixers.

Kroc visited their restaurant in San Bernardino, California and was very impressed with their operations. He saw promise in their quick methods of food production and knew that this would be something that could catch on nationally. The McDonald brothers happened to be looking for new franchise manager at the time because their prior manager had left due to health issues. Kroc took this opportunity to offer his services to the brothers and he began production.  Kroc opened his first store in Des Plaines, Illinois the now home of the McDonald’s #1 Store Museum. It was also the very first McDonald’s store that was built in a colder climate.

Kroc created the McDnald’s corporation and sought to continue the franchise all over the nation. He was met with opposition however, because the McDonald brothers were happy with the profit they were already making and did not seek to expand any further. They reached an agreement however and Kroc was able to purchase the company In 1961 for $2.7 million.