This street corner was once the location of the New Orleans International Trade Mart, which first opened its doors in 1947. The founder of the Trade Mart was a local gay businessman named Clay Shaw, who became the only person ever to be tried in connection with the assassination of President John F. Kennedy.

The old International Trade Mart building, founded and directed by Claw Shaw, which has since been demolished 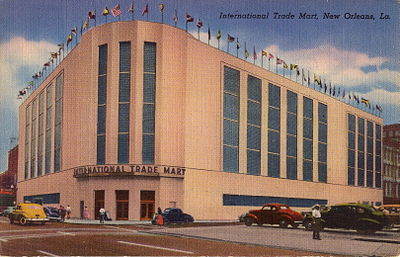 Clay Shaw, after his acquittal for conspiring to murder JFK 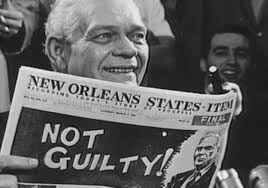 This location was the site of the New Orleans International Trade Mart, which was founded in 1947 by Clay Shaw, a gay New Orleans businessman who was also the only person ever tried in connection the assassination of President John F. Kennedy. After living for several years in New York City and then serving in the army, Shaw returned to his home state of Louisiana, where he founded the Trade Mart and purchased and preserved many French Quarter properties. In 1963, JFK was shot by New Orleans native Lee Harvey Oswald, and New Orleans District Attorney Jim Garrison became convinced that the assassination was “a homosexual thrill killing”. On March 1, 1967, Garrison had Shaw arrested for conspiring to murder JFK. Two years later, on March 1, 1969, Shaw was tried, and after only an hour of deliberation, the jury found him not guilty. His reputation ruined and his large amounts of his savings spent on his defense, Shaw filed a civil suit against Garrison, but Shaw died of cancer in 1974 before the suit could be brought to a conclusion.

“Who was the only man to ever face legal charges for JFK’s assassination?” JFK Facts. Jeff Moreley and Rex Bradford, 9 May 2016. https://jfkfacts.org/who-was-the-only-man-to-ever-face-legal-charges-in-jfks-assassination/.