This is the site of Cafe Lafitte in Exile, a very popular New Orleans gay bar and perhaps the oldest continuously operating gay bar in the United States. It is open 24 hours a day and has occupied this spot on Bourbon Street since 1953, after moving from 941 Bourbon St, where it originally opened in 1933.

Opening in 1933 and operating from this location since the 1950s 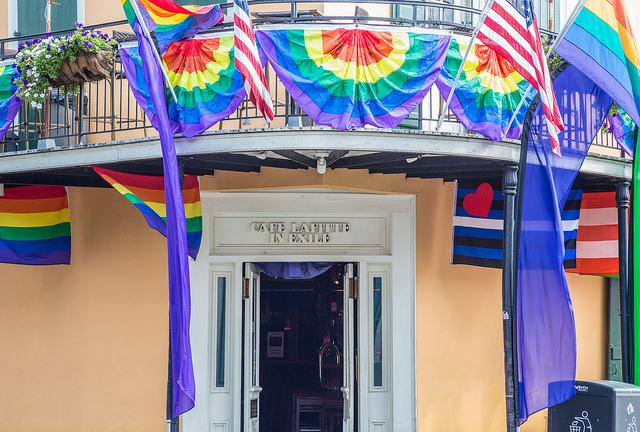 Established in 1933 by Roger “Tom” Caplinger, Cafe Lafitte in Exile claims to be the oldest continuously operating gay bar in the United States. When it first opened, it was called Cafe Lafitte and was housed just down the block at 941 Bourbon St, in the historic Lafitte’s Blacksmith Shop building. In 1953, the owners lost their lease to a new owner who did not want the existing gay clientele at the bar, so they were forced to move the bar to its current location at 901 Bourbon St, renaming it Cafe Lafitte in Exile to commemorate this forced move. The bar, which is open 24/7, was a fixture of the New Orleans gay scene, once hosting regulars such as Tennessee Williams and Truman Capote.