Frank Hampton, Jr. was the builder of Woodlands, on part of his family's former cotton plantation ("Old Woodlands"). The historic wood frame two-story home was built in 1896 in a Folk Victorian style from timber cut and milled on the property. Woodlands was listed in the National Register in 2006 for the integrity and workmanship of its architectural style and for its association with Frank's son, Harry R. E. Hampton, who lived here from his birth in 1897 to his death in 1980. Harry was a conservationist and columnist for his family's newspaper, The State. The home passed to Harry's daughter and remains a private residence. 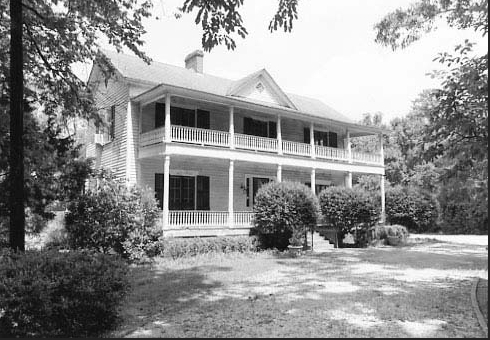 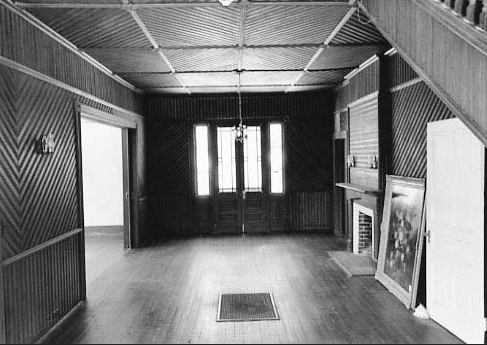 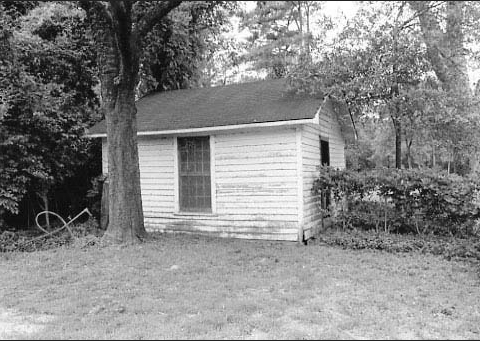 Woodlands is a historic home located on the southeastern edge of Columbia. The two-story wood frame house with classic and Folk Victorian decoration was built in 1896. It features a side gable roof on the front with a small decorative center gable in the attic. When viewed from the back, a cross gable roof and a side gable on a northern wing (likely an addition) can be seen. A two-tiered porch with a hipped roof graces the front of the clapboard-sided home. The solid brick foundation formerly was open-air brick piers. The home is an I house with a distinctive central hallway with pine flooring and dark-stained wood paneling on the walls and ceilings in parquetry style. An interior kitchen was added in the twentieth century. Two screened porches are along the rear of the house, one a newer addition. The building currently covers over 3,000 feet of living space. A roof plate labeled "April, 1896" was discovered in the attic during repairs.

A garden and pet cemetery lie south of the house. Also on the 14 acres at the core of the 33-acre property is a detached kitchen building in its original location from 1896 to the rear of the home. The rectangular, wood frame building with clapboard siding has a low-pitched roof.

The house was built from timber cut from the property and milled onsite by Frank Hampton, Jr. It was a gift for his bride, Gertrude R. E. Gonzales; the couple married in January of 1895. Woodlands was the home of Harry R. E. Hampton (1897-1980), a leading journalist and conservationist in South Carolina. Harry, the couple's second son, inherited Woodlands when Frank Jr. died in 1926.

The property was part of the former prosperous cotton plantation ("Old Woodlands") of 18,000 acres established by the Hampton family in 1786 near the new state capital. The plantation manor, a mile away from the 1896 house spot, was burned by Union troops under General William T. Sherman during the Civil War, said to be targeted due to its association with Confederate General Wade Hampton III (1818-1902).

Harry R. E. Hampton recalled the family gathering for warmth in the dining room of Woodlands, where the fireplace was kept burning. The room would sometimes become uncomfortably warm. Harry remembered his father sometimes taking a burning coal from the fireplace with tongs and taking it upstairs before bedtime, with sparks dropping along his pathway up the stairs.

The 14 acres at the historic core of the property was listed in the National Register in 2006. Woodlands is significant in architecture and conservation,and for its association with Harry R. E. Hampton, for the time period 1896 to 1955. The craftsmanship of the 1890's construction is very evident; later additions or modifications did little to detract from the building's style. Harry's conservation efforts included fighting to preserve Congaree Swamp as a national monument and helping found the state's Game & Fish Association in 1931. He wrote for the Columbia newspaper founded in 1891 by three of his mother's brothers, The State, retiring in 1965 as co-editor. He was described in an obituary as "nature's best friend."

The property is surrounded by a 1970's subdivision, Hampton Ridge, developed by the Hampton family on part of the former Woodlands estate. Harry died in 1980; the home passed to his daughter, Harriet Hampton Faucette, who still owned the house in 2005. The private property is hidden behind woods and is not accessible to the public.