The Japanese American Memorial to Patriotism During World War 2 is a national parks and services monument meant to commemorate citizens of Japanese ancestry who supported and fought for the United Stated during World War 2. This was implemented in light of the unfair treatment that people of Japanese ancestry went through during World War 2. This monument is located near Louisiana Ave and D Street, Northwest in Washington DC. This monument commemorates, Japanese American war involvement, not only in terms of veterans. This also included the patriotism that was shown even during the times that were spent in internment camps. 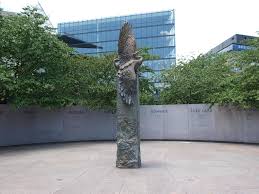 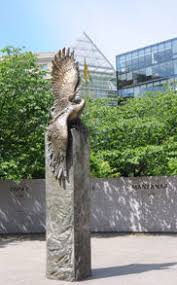 The Japanese American Memorial to Patriotism in World War 2 was sculpted by Nina Akuma, who is a third- generation Japanese American. This sculptor was a Japanese American artist, on top of being the ex-VP of an organization referred to as The National Sculpture Society. Akuma later said that that being able to be a part of this monuments creation hit home with her on a personal level.

During World War 2, Akuma’s grandfather was sent to an internment camp located on Sand Island in Pearl Harbor. While in his internment he was diagnosed with diabetes and he died of a heart attack while in the camp. She said that having a family history with growing up in Hawaii for a period of time combines with her grandfather’s story, this formed a connection between her and this monument.

The Japanese American Memorial to Patriotism in World War 2 originally stemmed from an exhibition from 1987 that can now be found at the Smithsonian Institution’s National Museum of American History. This monument was originally supposed to be built in 1991 in Washington, DC, but there was controversy on the monument. According to the National Capital Memorial Advisory Commission, this monument went against one of the acts that were created to keep monuments in check. This act read that there should be no monuments that are dedicated to war that encompass a specific ethnic group. But in 1992, President George H. W. Bush signed a document that said that a monument that honors the Japanese Americans that were put into internment camps and that fought for the US was to be built.