Constructed in 1882 by local Hickory contractor and carpenter John Summie Propst, the Propst House is considered one of the earliest examples of the Second Empire and Late Victorian architecture in the area. The 1 1/2 story cottage has a unique, asymmetrical appearance, due to the center hall plan in the shape of a "T." The cottage is adorned with a concave mansard roof, segmented arched windows, and patterned shingles on the exterior. The interor features an open-string staircase, installed shelving within the walls, and ornate mantles. In 1973, the house was placed on the National Register of Historic Places for its unique architecture. Currently, the Propst House is open to the public as historical museum.

The front of the Propst House 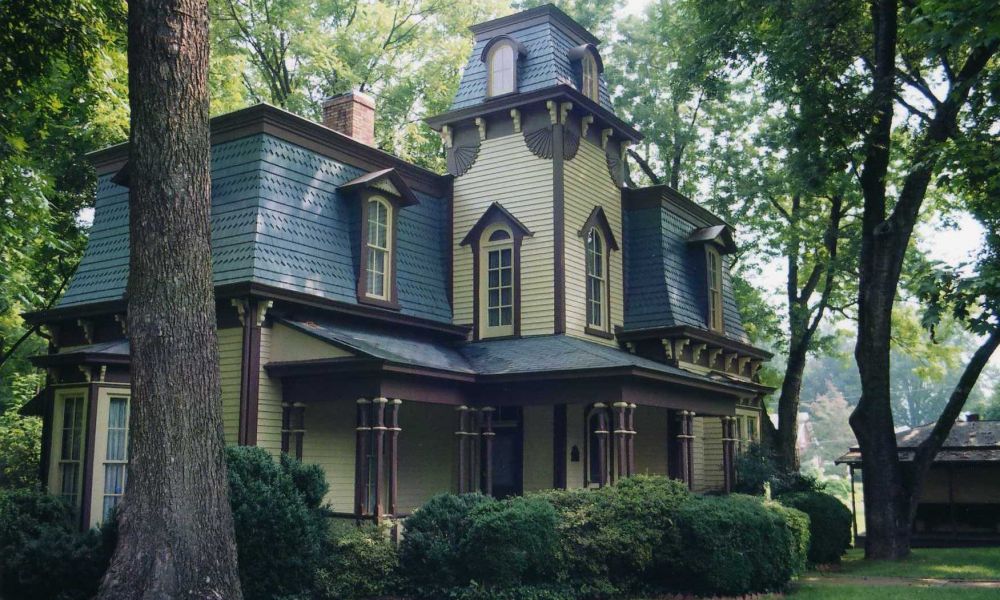 During the mid-to-late nineteenth century, John Summie Propst (1853-1940) was a locally popular contractor, carpenter, and cabinetmaker whose architectural work can be seen in several Lutheran Churches in the area. Propst was said to be an active member in municipal affairs and in the local Lutheran community, with his home being frequently used as a place for the congregation to meet after church for singing practice. Propst is also remembered for his prohibitionist stance while serving as a member of the Hickory Board of Alderman. His wife, Nancy Jane "Jenny" Abernethy Propst (1858-1932) was known as an outstanding cook and gardner.

In 1882, John constructed a cottage for him and his wife to live in, which is known today as the Propst House. The couple never had children and would later supplement their income by renting their home to borders.The 1 1/2-story home was constructed in the Second Empire and Late Victorian architectural styles, and the building has an asymmetrical appearance due to its "T" shaped plan. Additional exterior features of the home include a wooden mansard roof, segmented arched windows, and patterned shingles. The home also has a shed porch, which begins above the main entrance and follows the angles of the house across the west portion of the main facade. The main frieze is supported by paired, chamfered posts broken up by a molded band in the upper portion. Each of the projecting bays has a bracketed frieze similar to that carried around the house just below the concave mansford roof.

The interior of the home features an open-string staircase with wave pattern brackets and a molded handrail, installed shelving in the walls throughout the home, and ornate late-Victorian period mantles, which has various geometric and floral designs etched into the wood.

By the 1960s, after the death of the Propst family, the property became vacant and deteriorated rapidly. However, in 1967, the Hickory Landmarks Society was established to help save, restore, and preserve the home. The building was moved from its original location on tenth avenue to its current home in 1970. On April 24th, 1973, the Propst Home was placed on the National Register of Historic Places for offering a rare glimpse of Second Empire and Late-Victorian architecture in the Hickory area.

Today, the home is open from mid-March to mid-December to visitors as a historical museum. Tours focus on the history of the Propst family, the home and its furnishings, and the development of Hickory in the nineteenth century.