The Werner Inn as it stands today. 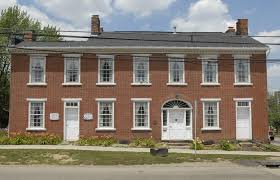 The original portion of this building was constructed in 1834 by Henry Werner who hired local mason Jacob Stambaugh. The original purpose of this building was to serve as an inn and tavern for stagecoaches traveling through Eastern Stark County. The building was purchased by Henry Warner's son-in-law, George Reed, sometime after 1853. The Reeds had six daughters, the youngest of which, Ida Reed, cared for her aging parents and maintained this building. Ida's daughter Charlotte also lived in the building, choosing to make this her home until 1986 when the Osnaburg Historical Society purchased the building.

Werner Inn is a two-story, 5 bay building with numerous different rooms. One such room was a tavern that would serve the stagecoach drivers coming through East Canton. There was also a ballroom used by George Reed as a meeting place for square dancing. There is also an attic that still shows charred timbers from a fire that had started at the mill next door, which caught the roof of the building on fire.

Osnaburg Historical Society purchased the building in 1986 and with local support, the organization began an extensive renovation. This work included the uncovering of the kitchen fireplace which had been behind a plaster wall, as well as finding a window that had been covered by plaster and marked the original end of the building's structure when it was first built. The restoration also involved replacing the roof of the inn and rebuilding the chimneys and replacing the floor of the tavern, the mantels installed over the fireplaces, and repainting most of the building. The building is still owned today by the Osnaburg Historical Society, and the organization hosts open houses of the historic inn throughout the summer.