The Callas Sweet Shop was built by Greek immigrant Mike Callas in 1921. This is the only surviving example of complete terra cotta tile fronts in downtown Owensboro. The building is especially refreshing because it lacks the overly elaborate detailing of many Beaux-Arts structures. It is currently occupied by Bill's restaurant.

Front of Bill's Restaurant in the Callas building at 420 Frederica. Taken 2013 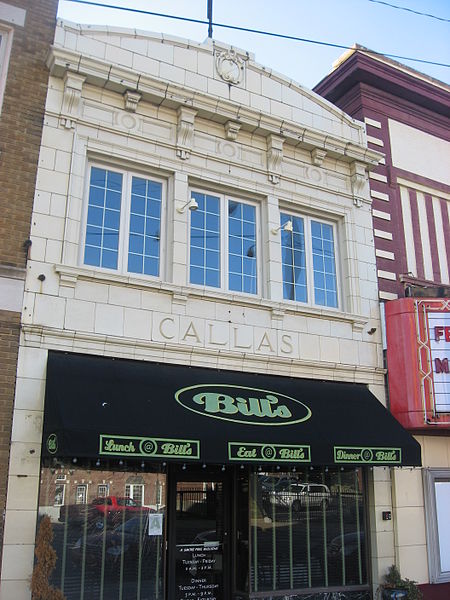 You can still see the name “Callas” in the stone above the door. This is the only surviving example of complete terra cotta tile fronts in downtown Owensboro, and lacks the overly elaborate detailing of many Beaux-Arts structures. It was built by Mike Callas in 1921. He immigrated from Greece in 1904, and in 1908 after traveling the US, he decided to settle in Owensboro because, as he said later, "I looked the whole country over and never found a city of people so congenial and, for the most part, kind to newcomers.” His ﬁrst job in town was shining shoes while he looked for a place to house a candy store. He eventually bought 124 West Main (2nd) Street and called it Progress Candy. After returning from the war, he purchased the Progress building and then built Callas’ for $35,000 next door to the Empress Theater. He operated both stores for 17 years before leasing the Progress in 1938 to Walgreens Drug Store. When Callas’ health failed in 1960, he rented his store to Barney Elliott who converted it into “Barney’s Callas Grill. Elliott sold the restaurant to his son, Jerry, in 1973, but remained a ﬁxture at the restaurant. Jerry sold the grill to London-born David Harrison in the early 1990’s. In 2000 it suffered extensive ﬁre damage from a grease ﬁre that ripped through the many layers of false ceilings. It was restored and reopened in 2001. In 2011 Bill Hughes bought it and turned it into “Bill’s,” which it remains today. It used to have a series of paintings by local artist Elizabeth Feldhaus on the inside walls depicting old buildings in Owensboro. In 1986 it was added to the National Register of Historic Places.