Broughton Hospital's Main Building was designed by architect Samuel Sloan and constructed in 1877. From 1890-1959 the hospital was known as the State Hospital at Morganton. The main building was expanded several times and was listed on the National Register of Historic Places in 1977 as the Western North Carolina Insane Asylum. The hospital serves the western thirty-seven counties of North Carolina as part of the state's system of care and treatment for persons with mental illness. The hospital is still in operation today and serves approximately 4,000 patients per year.

From 1890-1959 the hospital was known as the State Hospital at Morganton. 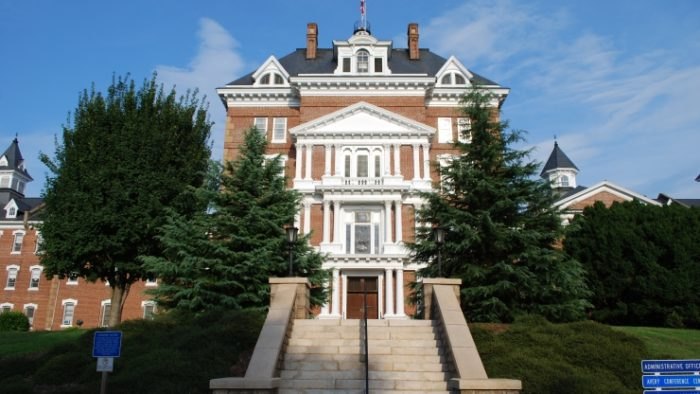 Dorothea Dix, a mental health advocate who created the first series of American mental asylums, lobbied in 1850 for the North Carolina General Assembly to appropriate funds for a state-run psychiatric hospital. The cities of Statesville, Asheville, Morganton, and Hickory all vied for the opportunity to house the project that was to be known in its early years as the Western North Carolina Insane Asylum, and Morganton won.

In 1875, the State provided $75,000 for the establishment of the psychiatric hospital. Built in Morganton on 283 acres of land, Western Carolina Insane Asylum opened its doors on March 29, 1883. During the first two years of operation, 252 patients were received. By 1884, the hospital’s first director, Dr. Patrick Livingston Murphy, reported to the General Assembly that more space was needed. In 1885 and 1886 two new wings were opened, expanding the hospital's bed space to over 500 patients. In that same year, the eastern boundary of the Western District was extended to Durham, Chatham, Moore, and Richmond counties

Many of the male patients constructed and maintained the hospital’s roads and grounds, which by 1893 would encompass over 300 acres. In fact, the external road built to connect the town of Morganton to the facility was created with the assistance of many of the Boughton Hospital patients themselves. During the 1920s, it was reported that the patient-to-physician ratio was 300-to-1 and increased to 500-to-1 by the 30s. Local legend has it that ghosts from this period still haunt the Broughton Hospital.

Broughton Hospital stills operates today as the largest of the three psychiatric hospitals operated by the State of North Carolina within the Department of Health and Human Services under the Division of Mental Health, Developmental Disabilities, and Substance Abuse Services. The Hospital serves the thirty-seven westernmost counties in the State, which have a population of over three million, or about 36.4% of the State’s total population. Patients are admitted to the hospital by judicial commitment or on a voluntary basis. The hospital serves approximately 4,000 patients per year with an average cost per day of $583. It employs approximately 1200 employees and has a 98 million-dollar annual operating budget.